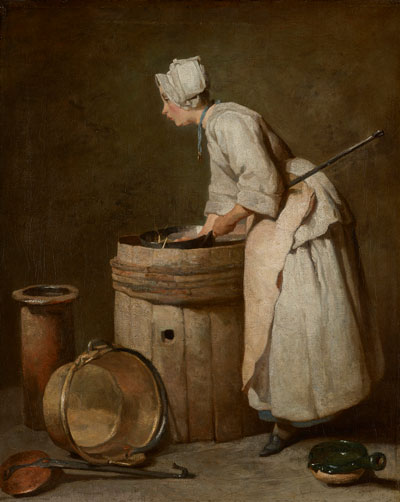 Jean-Siméon Chardin, The Scullery Maid, 1738.
Find out more via our online catalogue. 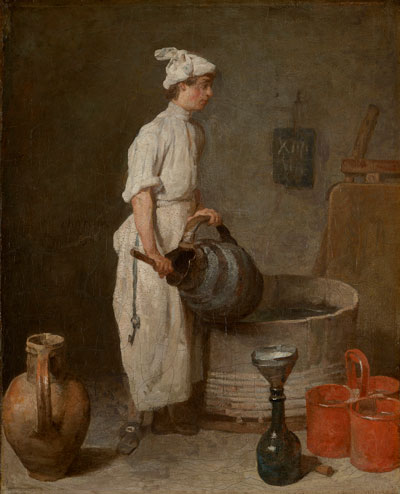 Jean-Simeon Chardin, The Cellar Boy, 1736-1738.
Find out more via our online catalogue.

He liked me fine the Master,
called me ‘pretty as a picture’
the day he stopped me at my scouring.
I was more than a mere scullery maid to him he said –
or rather
as something to pay attention to today
than a bonny scullery maid like me
he could think of nothing better.
He never called me by my name –
I think he never knew it, or needed to –
nor so much as touched my rough-work apron
that he said had a coarseness he liked the look of
as so he did my good clean house-frock’s unbleached
nothing-sort-of-colour that set off nicely
the peach-ness of my skin.
That got me blushing, but I needn’t have bothered.
Looking back, I can see his glad eye
was as greedy for copper, earthenware, old cooperage,
the glimmer in the long-handled pan I worked at.
He made every bit as much of that daft cellar boy
who was the bane of my life always
with his crude remarks and grabbing hands
given the half-a-chance I aye
had to make sure he never got. The Master
makes him look human, almost handsome, yes,
he certainly stands out
there in his kitchen-whites against the cellar’s dimness
beside the old tub
among his jugs and flask and funnel.
To him we were a pair.

‘Hold still!’ he said
and that was only time he ever spoke to me
with any hint of sharpness.
And I might have said, ‘Never mind, M’sieur Chardin,
that I’ve work to be done the mistress won’t be letting
me off with
and these pots won’t wash themselves!’ – except it
wasn’t
my place to, was it?
Besides, squinting at me through those spectacles,
dabbing at his canvas, tutting,
I could see that he was hard at work
and I liked that.
It gave me pause.

Jean-Siméon Chardin, The Scullery Maid, 1738.
Find out more via our online catalogue.

Jean-Simeon Chardin, The Cellar Boy, 1736-1738.
Find out more via our online catalogue.