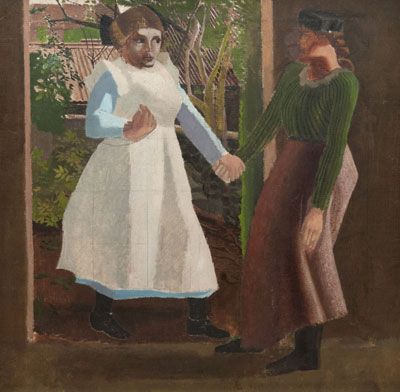 She is used to miracle – she is a milkmaid, after all,
knows the daily gift of thin white liquid can be turned
to curds or cream, or churned to pats of yellow butter.
So when the dank, sour dairy was filled that day with light,
and an angel stood before her, she knew herself
transformed, felt in her body the tiny flame of a child
which she must tend. But who will believe her?

She’ll get the sack for being pregnant, the village gossips
will whisper, and if she tells the truth, they’ll say
she’s mad, pack her off to the asylum. Where can she go
but here? Who else can she tell but her cousin?
She, the butcher’s daughter, who is used to the spill of blood
mopped up by sawdust, the slice of a knife through flesh,
and who knows for herself the wonder of conception.

And knows by now the bloom of pregnancy, can sense it
in her little cousin, who has turned up out of the blue,
urgent, anxious, yet with a quiet radiation about her
as she stands there framed by corrugated iron roofs
and new green leaves, her pinafore white as sails,
the frills around its shoulders looking like little wings.
Their sturdy hands are clasped: they are two women

linked by kinship, by news brimming over like milk
from an overfull pail. The older woman, like a tree
in her greens and browns, draws the young girl
over the threshold, says she must sit by the fire,
they’ll have tea and hot crumpets, and she will listen.
So Mary, fresh in her blue and white as the April sky,
comes inside, begins to tell her everything.

Note: As models for this painting, Spencer used a milkmaid and the local butcher’s daughter.