A Month of Mary Queen of Scots 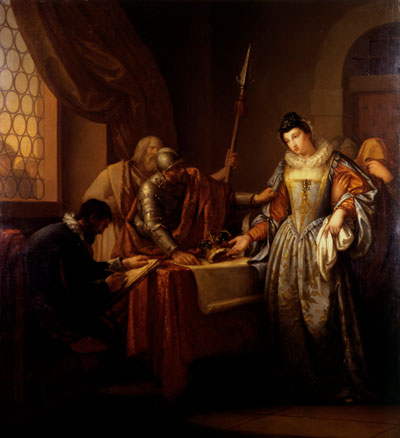 A series of fascinating new blog posts are now online as part of the Mary Queen of Scots project led by Dr Steven Reid, Senior Lecturer in Scottish History at University of Glasgow and Hunterian Curator Anne Dulau-Beveridge.

'In my End is my Beginning’: The Memorialisation and Cultural Afterlife of Mary Queen of Scots, 1567-2019 is a two-year research network mapping the presence of Mary Queen of Scots (1542-1587) in Scottish heritage collections. The network aims to put together an outline census of the extensive range of objects, images and cultural artefacts relating to Mary in Scottish heritage collections. From this collection, it aims to understand why Mary has had such an important and enduring presence in Scottish collective memory and popular culture.

The project is funded by the Royal Society of Edinburgh and involves a team of around 40 academics and curators exploring the cultural afterlife of Mary Queen of Scots from her abdication in 1567 to the present day. The project also focuses on the way that Mary's story has been told and re-told in Scotland over the past four and a half centuries, and - using Mary as a lens - what the retelling reveals about shifting Scottish attitudes to monarchy, religion, gender and politics.

A number of related workshops have already taken place and an outline list of about 2,000 Marian objects has now been created.

In response to the Covid-19 pandemic, the project has moved online and throughout July, some of the key finds will be showcased on the blog In Search of Mary Queen of Scots and via Twitter #monthofmaryqueenofscots.

Future workshops are open to the public via Zoom. Instead of day-long events they will be two-hour discussion sessions spread over two days, with a range of pre-reading and preparatory videos. The first workshop Materialising Mary takes place on 6 and 7 August and can be signed up for via Eventbrite. There will be two further workshops in September and October.

Read the In Search of Mary Queen of Scots blog.