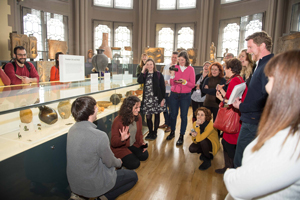 ‌On 22 and 23 February, scholars and experts from around the world gathered at The Hunterian for a workshop focusing on its outstanding collection of Roman artefacts from the Antonine Wall.

The workshop was held as part of a new project named EMOTIVE which has been funded under the European Commission’s H2020 programme.

EMOTIVE aims to use emotionally-resonant digital storytelling to dramatically change how we experience heritage sites. From 2016 until 2019, the EMOTIVE project team will research, design, develop and evaluate a series of storytelling methods and tools for the cultural heritage sector.

The result will be a prototype software platform for heritage professionals that can be used to create characters and narratives for archaeological sites and museums. Smartphone and tablet interfaces will be created that will provide visitors with personalised, emotionally engaging stories which can be experienced at a cultural site, or remotely.

The Hunterian was chosen for the first workshop thanks to its outstanding collection of Roman artefacts from the Antonine Wall. The displays offered the opportunity to test EMOTIVE’s approach in a real-world setting.

The EMOTIVE team is made up of archaeologists, developers and designers, interpretive planners and writers.

'We’re a diverse, interdisciplinary group, which is precisely what a project like this requires,” says Dr Maria Economou, Hunterian Curator and Lecturer in Museum Studies at University of Glasgow, “that’s our strength.'

'In Glasgow, we were joined by 20 additional experts in interpretation, user design and gaming and over two days, we have tested some of the newly developed collaborative tools we’ve created for designing stories.'

'The Antonine Wall is the perfect site for a project on storytelling,” Dr Economou says. “At one time there were 6,000-7,000 men stationed in forts along the Wall, many with their wives, children and slaves. Families, friends and rivals, all living in close quarters at the edge of the Roman world, imagine the personal stories!'

'At The Hunterian, we have hundreds of objects from the Wall including altars, gravestones and personal artefacts,' she continues. 'As a starting point for creating emotional stories, it’s hard to beat.'