Celebrating Burns Night at the Museum 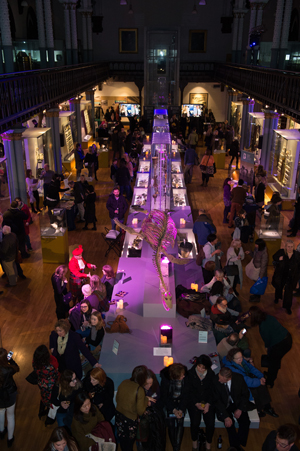 The Hunterian celebrated Burns Night on Friday 27 January with an evening of film, music, poetry and performance drawn from the Scottish Bard’s work.

Informed by discoveries from the Centre for Burns Research, based at the University of Glasgow, guests were treated to a combination of what they might already know, with something new. Only days before the event University of Glasgow alumnus, George Walker, donated to the University what is believed to be a songbook belonging to Agnes Burns, potentially Robert Burns’ sister, which contains copies of songs previously unknown to scholars. This valuable new acquisition was on full display to guests.

While the Museum lit up and provided the backdrop to our many performances throughout the evening, further along in the Kelvin Gallery visitors were treated to a film of The Jolly Beggars – a never before performed work by Burns. The film was led by actor Tam Dean Burn, who joined us in person for a dramatic performance, involving a tuba, and a puppet. 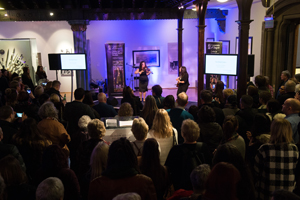 We were delighted to welcome the McNeill Sisters (pictured), and Wendy Weatherby and Steve Lawrence, to the stage who brought Burns to life through song. Professor Kirsteen McCue, Co-Director of the Centre for Robert Burns Studies, shared her thoughts on the importance of continued research into Burns, while we later welcomed Culture Secretary Fiona Hyslop who kindly spoke to guests and treated our Facebook Live team to an award winning Burns recitation. Watch the interview to find out more!

If you would like to see more of our Night at the Museum celebrating Burns Heritage, you can take a look at our Storify.

Interviews with Hunterian Director David Gaimster and Cabinet Secretary Fiona Hyslop can be viewed at our Facebook page.

The University of Glasgow received support from Museums Galleries Scotland and Scotland’s Winter Festivals during the 2017 Year of History, Heritage and Archaeology to showcase this spectacular event at The Hunterian.