Scotgold Gold Round presented to The Hunterian 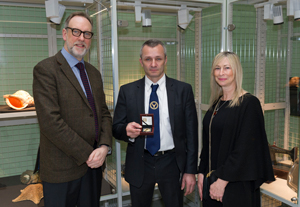 One of the first gold rounds produced from commercially mined Scottish gold has been presented to Professor David Gaimster, Director of The Hunterian, University of Glasgow, by Graham Donaldson, a major shareholder in Scotgold, which produced the gold from its mine near Tyndrum.

Mr Donaldson and his wife Christine sponsored the purchase of Scottish Gold Round Number 11 by The Hunterian, after the first 10 rounds were successfully sold at an auction held in November 2016 in Edinburgh.

The gold round is a wonderful addition to The Hunterian collection, which includes one of the world’s great numismatic collections.

“We are delighted that Graham and Christine have generously decided to mark the occasion of Scotland’s first commercially mined gold by sponsoring this contribution to The Hunterian’s impressive collection. We believe that gold mining has the potential to be a significant industrial sector and generator of employment in Scotland and this unique piece marks a significant milestone on this journey.”

“We are delighted with the generous donation of this item of such historical interest and are pleased to add it to our outstanding collection of Scottish gold coins and medals.”

Each of the gold rounds (there were 12 produced) is stamped with the Scottish Gold Mark of the stag’s head and bearing a unique serial number corresponding to a chain of custody system certified by the Edinburgh Assay Office.

The Gold Rounds were minted by Baird & Co Bullion Merchants.

Scotgold’s Cononish deposit, from which the first commercially produced gold in Scotland has been mined, is located near Tyndrum, Stirlingshire, in the Loch Lomond and the Trossachs National Park. Gold and silver are currently being produced at Cononish by the trial processing of stockpiled ore, whilst plans for the development of the full scale operation are being advanced. The company also holds significant exploration assets in Scotland through agreements with The Crown Estate and is quoted on the AIM market of the London Stock Exchange (Ticker SGZ). Visit the Scotgold website.

Scotgold also collaborated with The Hunterian during the production of the hugely successful Scottish Gold exhibition held in 2014.