Lord Stewartby Collection of Scottish Coins gifted to The Hunterian 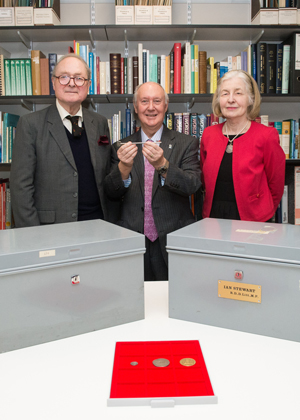 A treasure trove of Scottish coins covering over 600 years of Scotland’s history has been gifted to The Hunterian at the University of Glasgow.

The collection has been generously gifted to The Hunterian by Lord Stewartby, a leading collector and renowned scholar of numismatics.

Lord Stewartby presented his collection to Sir Kenneth Calman, Chancellor of the University of Glasgow, at a small ceremony in the new Hunterian Collections Study Centre at Kelvin Hall on Wednesday.

The Lord Stewartby Coin Collection contains some 6,000 coins from the reign of Alexander III in 1280 until the Act of Union of 1707. Included are silver pennies of Robert the Bruce, gold lions and unicorns of James I and II, and Renaissance portrait groats of James III. The more humble bawbee of the reigns of James V and Mary Queen of Scots is well represented and large silver ‘dollars’ come from the period of Mary’s marriage to Henry, Lord Darnley and bear the title ‘Mary and Henry, Queen and King of Scots’. There are also many examples of the large issues of Scottish gold, silver and copper coins of the 17th century.

Lord Stewartby’s interest in Scottish coins began when he was a schoolboy and has continued for over 70 years during which he has assembled the best collection ever put together by a private individual. The coins have been carefully chosen to give a comprehensive and in-depth treatment of Scotland’s own currency.

Ian Stewart was a banker by profession, served as a Member of Parliament and Government Minister, and is a Member of the Privy Council. He was created a peer in 1992 and was an active member of the Lords until his retirement in 2015. At the same time he published widely on numismatics, especially Scottish coins, and is regarded as the leading scholar on the subject. This was recognised by his being elected a Fellow of the Royal Society of Edinburgh and the British Academy as well as the Society of Antiquaries of Scotland and of London.

‘l am pleased the Coin Cabinet of The Hunterian has felt able to accept my Scottish coin collection, built up over seventy-five years. The new Coin Cabinet is a fitting home for it where scholars and numismatists from all over the world may study the collection. My one regret is that the early part of the collection was stolen in 2007 and I would urge the perpetrators to return the coins to The Hunterian so that the collection is complete and represents a full history of Scotland from David I to the Union told through coins.’

‘We are delighted to accept this generous gift. The Lord Stewartby Coin Collection is of immense value to scholars and researchers and forms an outstanding cultural asset. It is a wonderful addition to our important numismatic collection, which is considered to be one of the finest in the world.’

With this gift to The Hunterian and the sale of The Lord Stewartby Academic Collection of English Coins, the dispersal of Lord Stewartby’s coins is complete.

Lord and Lady Stewartby have compelling links with Glasgow. Lord Stewartby's kinsman, Sir Robert Stewart brought clean water to Glasgow from Loch Katrine and is commemorated by a splendid fountain in Kelvin Park. His great grandfather, Sir Halley Stewart, was MP for Greenock and founder of the London Brick Company. Lady Stewartby's grandfather was John Buchan, the celebrated author, Governor-General of Canada and alumnus of the University of Glasgow. His father was Minister of the John Knox Church in the Gorbals and it was from teaching his father's Sunday school class that John Buchan later drew the Gorbals Diehards in 'Huntingtower'.

Please note there is still a reward of £50,000 for the return of the stolen coins during Lord Stewartby's lifetime.