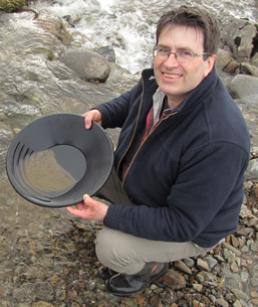 Dr Neil Clark studied Geology at Edinburgh University where he became a part-time research assistant travelling around southern Scotland looking for rare Carboniferous fossil crustaceans. At the same time, he began working as a part-time assistant curator at The Hunterian before starting his PhD in 1985. He completed his PhD on the World famous Carboniferous Bearsden arthropod fauna in 1989 before working in interactive science centres in Edinburgh, Halifax and Glasgow. In 1990, he began working as part of a team of geological curators at The Hunterian as a result of the Earth Science Review process that amalgamated several university geology departmental collections in Scotland with The Hunterian.

In 1989, Neil began a public engagement exercise to promote geology in Scotland by instituting a national geology week. This soon evolved into a major undertaking with hundreds of events beingorganised across Scotland during the month of September until 2011.

Much of his early work at The Hunterian was dinosaur related beginning with the discovery of a four toed track from the Jurassic of northern England in 1990, and he was described by the Glasgow Herald as "worth his weight in sand". Since then he has been working on dinosaur eggs from China as well as Scotland's first dinosaurs. From 1996 to the present day, there have been new discoveries of Scottish dinosaurs, nearly every year, all from the Isle of Skye. In 2006 he appeared in the book of Guinness World Records with his discovery of the World's smallest dinosaur footprint. He has now published several dinosaur books for Dorling Kindersely and Readers Digest, as well as having worked on several encyclopedia and a book on Baltic amber. He works on all aspects of Scotland's fossil heritage and because of his work on Scottish Jurassic dinosaurs was nicknamed Jurassic Clark by the Times Educational Supplement.

Recent Publications
Some of the most recent/most important can be found at http://eprints.gla.ac.uk/view/author/10175.html or www.Researchgate.net under Neil Donald Lewis Clark