Earlier this month, the University welcomed a senior delegation from Lower Saxony, Germany to explore the potential for wider collaboration between Scottish and Lower Saxon universities.

Despite current uncertainty surrounding Brexit, representatives from both regions affirmed their commitment to continue building solid relationships between academics, institutions and citizens, regardless of what may be on the horizon.

The visit was hosted by our Principal and Vice-Chancellor Professor Sir Anton Muscatelli, and brought together state ministers, members of parliament, and Presidents and Vice Presidents from several universities, alongside Universities Scotland and the Glasgow Chamber of Commerce. 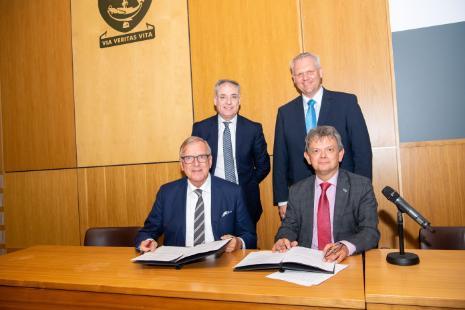 Reinforcing the importance of links between Lower Saxony and Scotland, the visit provided the opportunity for further engagement between the Scottish Parliament and that of Lower Saxony, and to build the relationship between Universities Scotland and the Lower Saxon Universities’ Alliance, LandesHochschulKonferenz.

Our Vice-Principal, External Relations, Rachel Sandison, said “It’s great to be able to welcome this ministerial and higher education delegation to Glasgow to discuss future collaboration alongside colleagues from across the sector. Now more than ever it is important to continue to work closely with our neighbours in Europe.”

"Now more than ever it is important to continue to work closely with our neighbours in Europe.

There is strong cross-border collaboration between Scottish and Lower Saxon universities in science and research & development, but also in student exchange programmes such as Erasmus.

One example of such collaboration is the European Centre for Advanced Studies (ECAS), established in 2018, which is a joint initiative between our institution and the Leuphana University of Lüneburg.

ECAS is an independent research institution through which both universities pursue common interests in research and teaching in the fields of digital culture and media, business informatics, law, management, sustainability and psychology. This involves joint research and study programmes as well as the exchange of academics and students.

Professor James Conroy, one of the Directors at ECAS, said “I hope that the European Centre for Advanced Studies can act as a conduit for wider collaboration between Lower Saxony and Scottish universities and that our researchers and students will be enabled to continue undertaking world-class research and having first-rate experiences together.”

A Memorandum of Understanding was signed between Universities Scotland and the Lower Saxony Universities' Alliance, committing both sides to continued and enhanced collaboration.

If you are interested in discussing partnership opportunities with Glasgow on an institutional, regional or network basis, please contact Professor William Cushley, Assistant Vice Principal International