Report recommendation: Development of a Hunterian exhibition exploring the often unknown and unexpected ways in which some items within the collections are related to the history of racial slavery. Ideally this would continue as a permanent digital exhibition.

The Hunterian are scheduling activity into their programme of exhibitions over the next few years.

Among those who took part in the exhibition were Professor Sir Geoff Palmer, Jamaica’s first Honorary Consul in Scotland. Sir Geoff responded to a ship built on the Clyde called Jamaica. 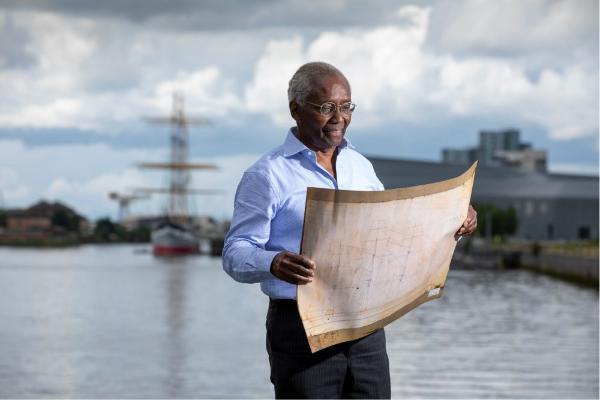 "Although the history of this slavery cannot be changed, exhibitions such as this can enlighten and change the consequences."

Sir Geoff said: “This 1854 design of a Glasgow-built sailing vessel, named Jamaica, reminded me of Jamaica’s long historical links with Glasgow. Jamaica Street was opened in 1763 for trading in goods produced by chattel slaves in the West Indies. The Stirling and Dennistoun families made large fortunes from this cruel slavery. Although the history of this slavery cannot be changed, exhibitions such as this can enlighten and change the consequences.”

Dr Christine Whyte, lecturer in Global History in the College of Arts, collaborated with colleagues in the University Library and The Hunterian to create the exhibition. Dr Whyte said: “For many centuries, people of African descent have called the attention of the world to the injustices of the slave trade, slavery and racism. The University of Glasgow is responding to that call by opening this dialogue about reparative justice. I hope this exhibition can provide space for reflection on the memories of enslaved people and serve as a testimony to the tireless activism of Scottish anti-racism campaigners.”