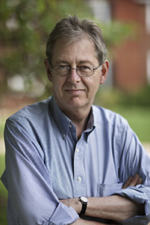 As good a place as any to begin thinking of contemplation is with Iamblichus’s proposal that the contemplative man is “the most free” of all humankind. How does this freedom comport with religious practice in the ancient world? Specifically, how does contemplation fit with philosophical and religious practice? The question prompts us to leave Greek cultic religion and consider Jewish religious practice and what Christians have made of it. Our initial quest ends not with a pure gaze but with an image. But of what is the image?

Kevin Hart is the Edwin B. Kyle Professor of Christian Thought in the Department of Religious Studies at the University of Virginia where he is also Courtesy Professor of English.

Among his principal publications are The Trespass of the Sign: Deconstruction, Theology and Philosophy (Cambridge UP, 1989), A. D. Hope (Oxford UP, 1992), Samuel Johnson and the Culture of Property (Cambridge UP, 1999), The Dark Gaze: Maurice Blanchot and the Sacred (Chicago UP, 2004), Postmodernism: A Beginner’s Guide (Oneworld, 2004), Kingdoms of God (Indiana UP, 2014), and Poetry and Revelation: For a Phenomenology of Religious Poetry (Bloomsbury, 2017).  He is the editor of, among other collections, The Oxford Book of Australian Religious Verse (Oxford UP, 1994), The Power of Contestation: Perspectives on Maurice Blanchot (with Geoffrey Hartman) (Johns Hopkins UP, 2004), Derrida and Religion (with Yvonne Sherwood) (Routledge 2004), Counter-Experiences: Reading Jean-Luc Marion (Notre Dame UP, 2007), Clandestine Encounters: Philosophy in the Narratives of Maurice Blanchot (Notre Dame UP, 2010), The Exorbitant: Emmanuel Levinas between Jews and Christians (Fordham UP, 2010) and Jean-Luc Marion’s The Essential Writings (Fordham UP, 2013). He is currently editing the fifth volume of the five-volume series The Bible and Literature for Bloomsbury, and revising a new critical study, Blanchot Encore. He is the author of eight volumes of poetry and three selections of his poems, the most recent of which are Wild Track: New and Selected Poems (Notre Dame UP, 2015) and Barefoot (Notre Dame UP, 2018).