Lecture: 'My Life, Your Life: Equality and the Philosophy of Non-Violence'

‘What does inequality have to do with non-violence?

Professor Judith Butler, eminent gender theorist and political philosopher from the University of California at Berkeley, visited the University of Glasgow and delivered the Gifford lectures between the 1st and 4th of October 2018. The emphasis of Professor Butler’s lectures was on using the concept of non-violence to call for a commitment to equality by arguing for the ‘radical equality of the grievable’. For Butler, most forms of violence are implicated in a fundamental  inequality of grievability – i.e. the unequal value placed on lives or on the unequal grievability of those lives.  These lectures suggest that a philosophy of non-violence has to take into account forms of inequality that value certain lives more highly than others.

This is a line of thinking Prof. Butler has developed in a number of important works addressing the questions of interdependence, mourning and precarious life but also conflict and war.  The work in progress she presented at Glasgow follows on from this recent work and is an important new intervention in ongoing debates about alterity, conflict, solidarity and the possibility of global justice.Prof. Butler also led a research seminar within the University, on 4 October. 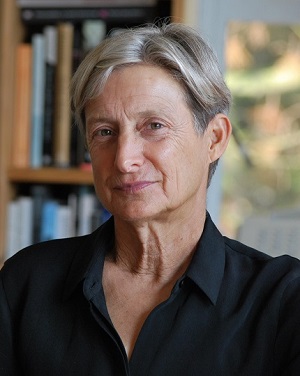 Judith Butler is Maxine Elliot Professor in the Department of Comparative Literature and the Program of Critical Theory at the University of California, Berkeley. She received her Ph.D. in Philosophy from Yale University in 1984.

Butler is the author of several books:  Subjects of Desire: Hegelian Reflections in Twentieth-Century France (1987), Gender Trouble: Feminism and the Subversion of Identity (1990), Bodies That Matter: On the Discursive Limits of “Sex” (1993), The Psychic Life of Power: Theories of Subjection (1997), Excitable Speech (1997), Antigone’s Claim: Kinship Between Life and Death (2000), Precarious Life: Powers of Violence and Mourning (2004); Undoing Gender (2004), Who Sings the Nation-State?: Language, Politics, Belonging (with Gayatri Spivak in 2008), Frames of War: When Is Life Grievable? (2009), and Is Critique Secular? (co-written with Talal Asad, Wendy Brown, and Saba Mahmood, 2009) and Sois Mon Corps (2011), co-authored with Catherine Malabou. Her most recent books include: Parting Ways: Jewishness and the Critique of Zionism (2012), Dispossession: The Performative in the Political  (co-authored with Athena Athanasiou 2013), Senses of the Subject and Notes Toward a Performative Theory of Assembly (2015).  And in 2016, she published a co-edited volume, Vulnerability in Resistance, with Duke University Press.  Her books have been translated into more than twenty languages.

She served as Founding Director of the Critical Theory Program at UC Berkeley, served as Department Chair of the Department of Rhetoric in 1998-2003 and 2006-7, and the Acting Chair of the Department of Gender and Women’s Studies, 2002-3. She also served as the Chair of the Board of the University of California Humanities Research Center in Irvine.  She has served on the Executive Council of the Modern Languages Association and chaired its committee on Academic Freedom. She is presently the Principal Investigator of four year grant from the Andrew Mellon Foundation to develop an International Consortium of Critical Theory Programs. She is also affiliated with the Psychosocial MA Program at Birkbeck College in London and the European Graduate School in Sass Fee, Switzerland.

Butler is active in several human rights organisations, currently serving on the board of the Center for Constitutional Rights in New York and the advisory board of Jewish Voice for Peace. She was the recipient of the Andrew Mellon Award for Distinguished Academic Achievement in the Humanities (2009-13).  She received the Adorno Prize from the City of Frankfurt (2012) in honor of her contributions to feminist and moral philosophy, the Brudner Prize from Yale University for lifetime achievement in gay and lesbian studies, and the Albertus Magnus Professorship from the City of Cologne, Germany in 2016. She is as well the past recipient of several fellowships including Guggenheim, Rockefeller, Ford, American Council of Learned Societies, and was Fellow at the Institute for Advanced Study at Princeton and at Ecole Normale Superieure in Paris. She has given the Wellek Lectures at Irvine, the Carpenter Lectures at the University of Chicago, the Watts Lecture at the Nobel Museum in Stockholm, the Gauss Lectures at Princeton, the Messenger Lectures at Cornell, the Tanner Lectures at Yale University, and the annual Freud Lecture at the Freud Museum in Vienna.  She has received nine honorary degrees: Université Bordeaux-III, Université Paris-VII, Grinnell College, McGill University, University of St. Andrews, Université de Fribourg, Universidad de Buenos Aires, Liège Université, and the Universidad de Costa Rica. In 2014, she was awarded the diploma of Chevalier of the Order of Arts and Letters from the French Cultural Ministry. In 2015, she was made an “honorary geographer” by the American Association of Geographers and was elected as a corresponding fellow of the British Academy. She is a member of the American Philosophical Society.