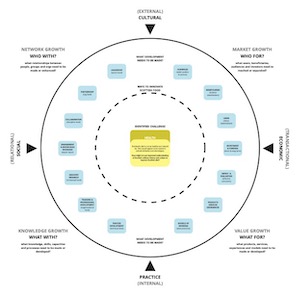 Now that the Food: Sustainability, Health, Heritage and Tourism Catalyst is underway, it has illuminated just how provocative and nuanced the topic of Scottish food is. On the 18th of August, academic researchers from across the University of Glasgow and Glasgow School of Art came together with partners from the Scottish Food Industry at the University’s Advanced Research Centre (ARC). Having conducted interviews with the Catalyst’s participants, four main challenges to the Scottish food industry emerged.

For our consideration of Sustainability, participants noted that Scottish food needs to be increasingly sustainable, particularly in terms of agriculture and especially when addressing the climate crisis. This prompted the question of how can we inform food production practices, so they are effective and sustainable within the Scottish climate?

In terms of Health, Scotland’s diet is not as healthy as it should be. It emerged that this problem appears to be rooted in cultural attitudes and stereotypes. Participants were asked to consider how we might use improved understanding of Scottish culinary history and culture to improve Scottish diet?

The next challenged that emerged from initial discussions was that of Locality. Advances in both transport and refrigeration have meant that we can purchase fresh produce from across the globe. But at what cost to the environment and our economy? Scotland has a wide variety of food on our doorstep which is often exported due to being too expensive or not commonplace within the Scottish diet. The Catalyst asked, how could we encourage Scottish communities to make more of the produce on its doorstep?

Finally, the Catalyst turned to Tourism. Throughout our conversations it became clear that Scottish produce and food is not always viewed as a serious cultural product. Participants considered how that attitude might be shifted, to improve both tourism and food culture within Scotland.

To discuss these four challenges at the initial pathfinding event in August, Catalyst participants were asked to order the challenges in line with their interests. Their top two choices were listed, and everyone was split into small groups based on their choices. Guided by facilitators from both the University of Glasgow and the Glasgow School of Art, the groups discussed their chosen challenges over the course of an hour. This was done using an Innovation Map: a data-gathering tool prepared for the Catalyst by Michael P Johnson from the Innovation School, Glasgow School of Art.

The Innovation Maps broke the discussions down into four quadrants that related to the challenges: network growth, knowledge growth, value growth and market growth. The discussions followed these quadrants. This pattern allowed participants to get into detailed conversations about who the Catalyst’s outcomes might benefit, what they might be for, what was needed to facilitate them in terms of knowledge, and who needed to be involved. Responses were recorded and placed around the Innovation Maps, producing detailed resources which innovatively captured the ideas and opinions of the participants.

After discussing their first preferred challenge, participants came together to discuss the second challenge they had listed, in the same way as before. This, and the networking break, meant groups of participants were mixed and had a chance to interact with a variety of people. Throughout the day, rich conversations were had around all angles of food in Scotland – conversations that we hope to turn into fruitful collaborations.

Once the pathfinding event was completed, the Innovation Maps were gathered. The innovative methodology designed by the Glasgow School of Art makes synthesising the discussions of the Catalyst efficient and effective. This then allows for the pathways to become even more defined, as themes and questions emerge from the discussion to formulate the challenges posed at the next Food Catalyst meeting.

The report produced after the Catalyst event in August highlighted more detailed systemic challenges to the Scottish food industry. These were based in four areas, refined from the initial challenges: Food Policy and Evidence Leadership Groups; New Promotion Channels for Scottish Food; Expand Food Education and Knowledge Exchange; and Regional Clusters for Local/Global Identity. Participants were once more asked to rank the challenges in line with their interests, and the four sub-groups which were discussed at the initial pathfinding event.

On the 27th of October, participants will regroup at the ARC to discuss these details and co-develop strategic and action level plans, once more utilising the innovative methodology designed by colleagues at the Glasgow School of Art. We will use these collaborative meetings to ask: what kind of projects can meet these objectives for the Scottish food industry, and what actions can deliver these projects?

As the Food: Sustainability, Health, Heritage and Tourism Catalyst progresses, we look forward to moving towards collaborations that can begin to address the issues that have emerged so far. If you are interested in being involved in this Catalyst, from either a research or industry perspective, get in touch by emailing Fraser Rowan at Fraser.Rowan@glasgow.ac.uk