To mark the 699th anniversary of the Battle of Bannockburn, the National Trust for Scotland’s “Big Dig” took place over the weekend of 22 and 23 June.

The Big Dig is part of an on-going archaeology project being undertaken by the National Trust for Scotland in association with the University of Glasgow’s Centre for Battlefield Archaeology, Stirling Council, GUARD Archaeology Ltd and BBC Scotland.

Looking to shed new light on one of Scotland’s biggest historical mysteries, the exact site of the Battle of Bannockburn, hundreds of volunteers from the local community took part in the mass archaeology project at the Braehead field near Bannockburn, to search for clues as to where elements of the 2-day-long battle took place in 1314. 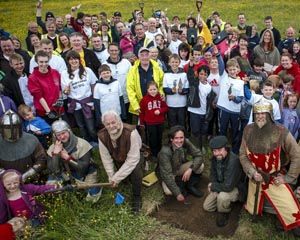 Some elements of the work were filmed as part of a special two-part BBC Scotland series presented by Neil Oliver and Dr Tony Pollard, which will go out in spring 2014 to coincide with the 700th anniversary of the battle. This is the first time that the duo have been reunited since the BBC series “Two Men in a Trench”.

On Sunday 23 June five families also lent their back gardens to the project as test pits, allowing a search for objects lost during or after the fighting in 1314 in areas previously unsearched. The homes covered the areas of Braehead, Broomridge, Hillpark and Milton in Stirling, which had been determined by experts to be of the most interest in exploring the battle.

All volunteers were supervised by experienced archaeologists and guided in hand excavation, finds discovery and identification, recording of discoveries and dating of artefacts.

Historians and archaeologists often have conflicting views as to where parts of the battle took place, and we hope that this work will bring new evidence to life. Our aim is to tell the story of the Battle of Bannockburn as accurately as possible at the new visitor centre opening in 2014.”

As the archaeology project was launched last year Neil Oliver said: “This has to be one of the most potentially exciting archaeological digs in Scotland that there has ever been.”

Finds from the dig work will be analysed by experts, and full results will be announced in the special 2-part BBC Scotland series set to air in 2014.

The 699th anniversary marks one year to go until the new state-of-the-art Battle of Bannockburn visitor centre will officially be opened to the public, and the National Trust for Scotland’s 3-day re-enactment event will take place over the weekend of 28-30 June 2014.

For more information and images please contact Heather Macpherson at the National Trust for Scotland on hmacpherson@nts.org.uk or 07544539283

The Battle of Bannockburn Project

1. A new look for 2014: The Battle of Bannockburn project is an exciting partnership between the National Trust for Scotland and Historic Scotland, funded by the Scottish Government and the Heritage Lottery Fund. An innovative new visitor centre and sensitive landscaping will change the way visitors experience Bannockburn, making it a truly world-class site for this defining moment in Scotland’s history.

2. The new Battle of Bannockburn Visitor Centre will use state of the art installations to interpret and explain the circumstances that led up to this pivotal event in our history and its consequences. The Scottish Government has committed £5 million through Historic Scotland, and £4.1 million has been awarded by the Heritage Lottery Fund.

3. The design team include: