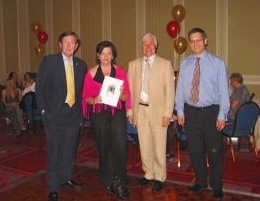 In June we hosted a dinner for alumni of the Department, attended by over 120 people including alumni from Canada and Japan as well as many from closer to home. Our guests included the Principal, Sir Muir Russell, and the Cabinet Secretary for Education and Lifelong Learning, Fiona Hyslop, a graduate of the Department.

In September we held a conference for current and ex-staff of the Department. This was attended by over 50 people and included papers from Rick Trainor (now Principal of King's College, London and head of Universities UK), Terry Gourvish (Director of the Business History Unit at the London School of Economics) and Roy Hay, who had come from Australia.

In association with the Jubilee we prepared a series of twelve posters detailing the history of the department, which are now on permanent display in  . A downloadable version of the series is also available from the   page.