I am currently undertaking the first study on the gut-mind connection in nineteenth-century French litersture and medicine by looking at links between digestive health and the mind in novels, gastronomic writing and health manuals. Inspired by recent conversations with academics from a range of disciplines, I am now PI on a Network Grant awarded by the RSE to fund the Scottish Gut Project. The project focuses on the links between gut disorders and mental health amongst Scottish patients and investigates problems of communication and language in explaining digestive diseases and their impact on wellbeing. I am also writing my next monograph, Food and Mood: The Gut-Mind Relationship in Nineteenth-Century French Literature and Medicine.

As Co-Director of the Scottish Food and Drink Histories artslab theme, I recently produced a video available here on my reserach and its connections with the theme's catalyst

The research was inititally inspired by an nternational, cross-disciplinary workshop I organized in May 2017 on Gut Feeling to examine changing attitudes towards the digestive system in modern Western culture. The event was funded by a range of external sources including the British Academy. A key insight that emerged is the importance of emotion and psychology in eating and digesting. The event provided the basis for a volume of essays, Gut Feeling and Digestive Health in Nineteenth-Century Literature, History and Culture (Palgrave: 2018) which I co-edited with Alison Moore (Western Sydney University). To foster further research on digestive health from a historical and cultural perspective, I organized a round table on 'Digestive Health: Then and Now' in November 2017 and a two-day workshop on 'The Gut-Brain Axis: Cultural and Historical Perspectives' in May 2018. This led to a specialist issue of of Microbial Ecology in Health & Disease on the 'The Gut-Brain Axis in History and Culture'. I recently completed an article featured in History Today on the importance of health in the early development of gastronomy.

My research broadly examines the literary, visual, medical and scientific culture of nineteenth-century France. My first monograph, Vision in the Novels of George Sand (OUP, 2016), considers the pull between the visual and the visionary in this period through an examination of Sand’s novels, in particular by exploring internal vision, the model of painting, and the scientific gaze. The book draws on my PhD thesis which was awarded the George Sand Memorial Prize in 2013. Inspired by Sand’s scientific explorations, I continued to examine engagements between the novel and the natural sciences, in particular in the works of Sand, Flaubert and Zola. This led to significant findings such as unexpected links drawn by thinkers of the time between transformist theories and reincarnation. This research was funded by the British Society for the History of Science and the Carnegie Trust. In my more recent work I have examined the cultural impact of bacteriology on attitudes towards dirt and hygiene in the second half of the nineteenth century. I am on the core team for SNNEC (Scottish Network for Nineteenth-Century European Cultures) and organised the network's final workshop on networks of technology, science and health.

History of Medicine Seminar, Royal College of Physicians and Surgeons of Glasgow, 29 January 2019

University of Oxford, 5 June 2018 ‘What is health? It is chocolate!’: Chocolate, medicine, and writing in nineteenth-century France  (Science, Medicine and Culture in the 19th Century Seminar)

Reviews of Vision in the Novels of George Sand:

'this unprecedented study [...] is an exemplar of the richness of interdisciplinary research' (Meredith Lehman, George Sand Studies)

'Vision in the Novels of George Sand is conceptually profound in its articulation of vision and the visual; at the same time, it is lucidly written and accessible. The book also casts a wide net, relating the concept of vision to literary esthetics, social utopianism, painting, and scientific investigation. [...] Vision in the Novels of George Sand is an ambitious and successful monograph. It has much to offer even the seasoned Sand scholar. Meticulously researched and clearly written, it makes a robust contribution to nineteenth-century French literary studies.' (Pratima Prasad, H-France Review)

‘Mathias has written a well-structured, articulate, and convincing work. She demonstrates an impressive mastery of Sand’s œuvre and draws on a significant corpus of literary theory and history, as well as Sand criticism, in order to illuminate Sand’s original conceptions of vision. Mathias’ examples […] are remarkably effective and analyzed with fine attention to detail. […] Vision in the Novels of George Sand is a fascinating study, wide-ranging in scope.  It offers not only an original perspective on Sand’s work but also a renewed challenge to the clichéd categories of literary history.’ (Mary Jane Cowles, Nineteenth-Century French Studies)

‘Manon Mathias’s elegant and insightful study, Vision in the Novels of George Sand, presents a scrupulously researched and beautifully written exploration of the ideas of physical and abstract vision in George Sand’s oeuvre. Going far beyond its modest title both in the scope of its analyses and in its intellectual range, Mathias’s monograph brings refreshing new perspectives to our understanding of the most important female author in nineteenth-century France.’ (Alexandra K. Wettlaufer, Tulsa Studies in Women’s Literature)

“This collection is an excellent example of interdisciplinary medical humanities scholarship [...] Highly recommended for anyone interested in the ideological, political and metaphorical significance of digestive health in nineteenth-century culture.” (Professor Hannah Thompson, Royal Holloway, University of London, UK)

'Gut Feeling And Digestive Health In Nineteenth-Century Literature, History And Culture is a book that brings to the fore the cultural origins of this gut-brain pairing. Mathias and Moore achieve this by bringing eleven scholars from varying fields of literature, science and politics to explore the range of aspects encompassing the gut, the mind and digestion, in order to illustrate how this was an area of scientific and medical breakthrough in the nineteenth century. These innovative discoveries, paired with traditional perceptions, exemplify the centrality of discourse surrounding the gut-brain axis at this time. Therefore, this collection of essays successfully brings together diverse platforms that discuss the gut in the nineteenth century.' (Arabella Henderson, Durham University)

Sophie Maddison, Urban Interconnections in the Works of Zola and Serao

Nineteenth-century France is a deeply invigorating period to study and teach and I enjoy developing new courses that draw on exciting new work in nineteenth-century studies. For example, I have launched an Honours option on Food in French Culture, inspired by my current research project on digestive health. I also enjoy teaching all aspects of language and have experience of teaching grammar; composition; and translation into and out of French at all levels.

I currently convene the following courses: 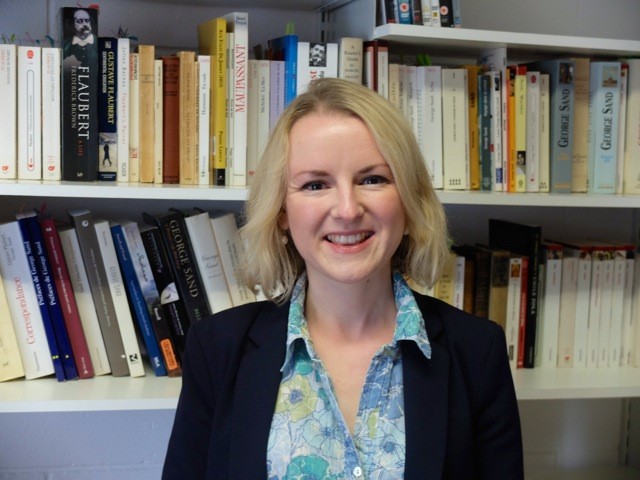