The principal activity of the forensic pathology section is service provision, performing post mortem examinations for the Procurators Fiscal of Glasgow and the surrounding regions. This is under the Contract which the University of Glasgow holds with the Crown Office, the central legal authority in Scotland.

Each year the six consultant pathologists will perform up to 2,400 post mortem examinations on a wide range of sudden and unexpected deaths. The nature of these deaths will range from natural disease, through trauma, alcohol and drug abuse, to deaths related to medical care, and those occurring in suspicious circumstances including overt homicides.

There is a 24 hour on-call service to assist with suspicious deaths, which may include attendance at scenes. The pathologists would expect to deal with some 60 to 70 homicides each year, in addition to other suspicious cases which have given rise to concern, and will frequently be required to give evidence as expert witnesses in subsequent criminal trials, mostly in the High Court of Justiciary. Other court appearances will be at Fatal Accident Inquiries (FAIs) in relation to deaths in custody, at work, or where there are concerns over medical care.

Post mortem examinations are carried out in the Queen Elizabeth University Hospital Mortuary.

While being contracted to ‘the Crown’, the pathologists are nevertheless very conscious of the need to retain professional independence and they will also carry out work for ‘the defence’ and for other agencies, both at home and abroad.

Although the unit historically uses the term Forensic Medicine in its title, the expertise of its staff is in forensic pathology, as opposed to clinical forensic medicine. The latter is the realm of forensic physicians who are based elsewhere. 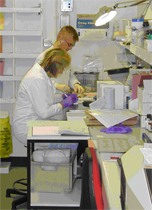 Secretarial and laboratory support
The pathologists are supported in their work by a manager for the Crown Office Contract and by four secretaries.

Additionally, all histology (material for microscopic examination) – a vital follow-up investigation in many cases - is carried out in-house. Toxicology analyses are similarly carried out within the unit (see Forensic Toxicology).