The Public in Law Colloquium

In May 2009, doctoral students in the Law Organised a Doctoral Colloquium entitled ‘The Public in Law.’ The colloquium hosted presentations from established academics and new researchers from across the UK, Europe and US. The presenters considered whether and in what manner ‘the public’ operates as an interface between law and society, allowing the interests and opinions of the population at large to be represented and reflected in legal discourse, such that collectively generated imperatives may be imposed upon political and economic actors.

The Colloquium led to the development of an edited collection of essays, published as part of the Edinburgh/Glasgow Law and Society series. The editorial for the collection included a team from the Colloquium organisers. Multi-disciplinary in its approach, the volume reflects an understanding that there is more to the role of 'the public' in relation to law than the conventional demarcation of the field of 'public law' and that this relationship is open to comment from a wide range of actors. 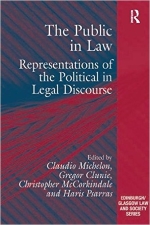