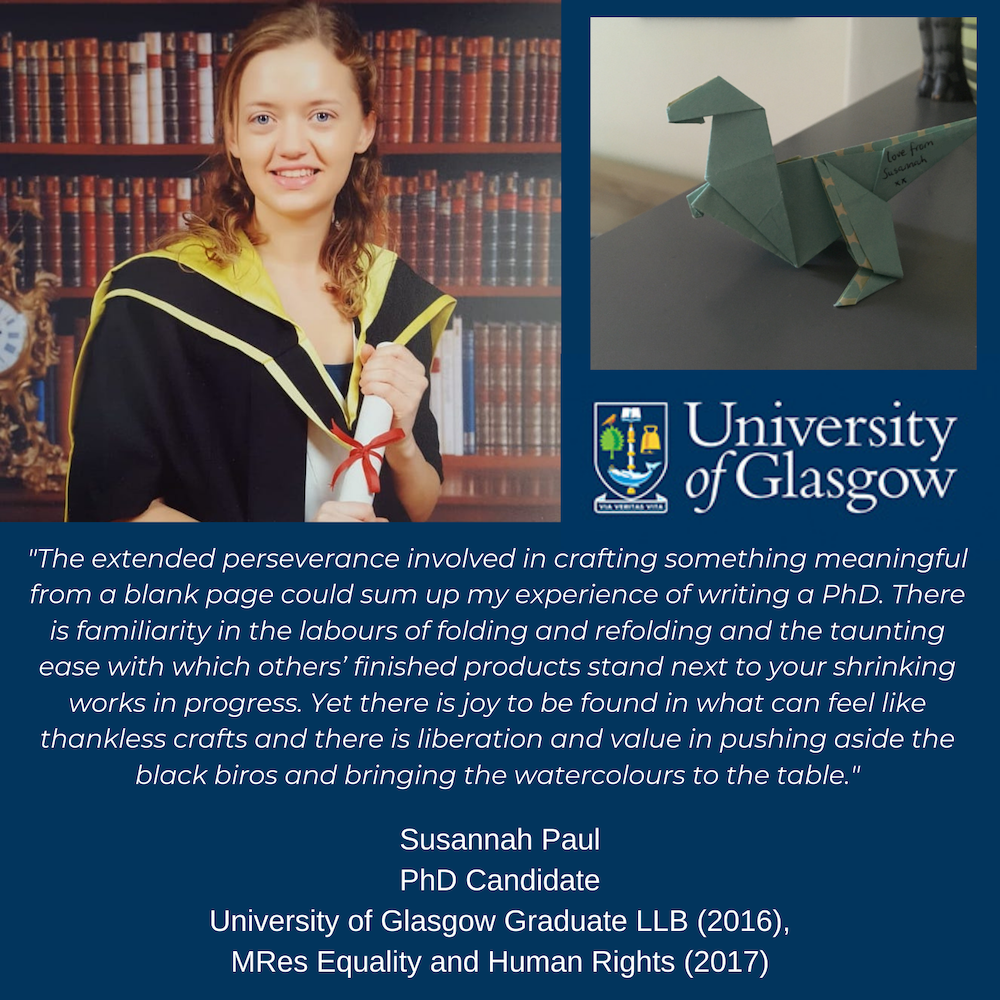 I recently made an origami dinosaur for a good friend who had just had her first baby. The YouTube video I sourced to guide my maiden voyage into origami was titled ‘How to make an easy origami dinosaur’. Judging by the turmoil in the comment section I was not alone in thinking that there was nothing ‘easy’ about the hand wizardry that this demanded. An hour into the process and I found myself thrusting a handful of origami squares at my boyfriend - ‘OK then, why don’t YOU try it?’ - after he offered the advice ‘don’t give up... just follow it step by step, exactly like the video’.  By this point, almost every fold was threatening to derail the effort. Worse still, my past folding errors were coming back to haunt me. Where ‘Origami YouTube Man’ had been left with a mountain fold, I had left myself a valley fold… in the moment it was much less poetic and much more infuriating than it sounds.

The extended perseverance involved in crafting something meaningful from a blank page could sum up my experience of writing a PhD. There is familiarity in the labours of folding and refolding and the taunting ease with which others’ finished products stand next to your shrinking works in progress. Yet there is joy to be found in what can feel like thankless crafts and there is liberation and value in pushing aside the black biros and bringing the watercolours to the table.

At the start of my undergraduate law studies I was retested for the dyslexia that I had been diagnosed with in childhood, the test results found that I was ‘definitely still dyslexic’ and the educational psychologist suggested that she thought I probably wouldn’t be able to cope with studying law. Traditional legal study has quite a rigid devotion to the use of dense readings and memory tests, which if you have dyslexia, doesn’t tend play to your strengths.

Within socio-legal research I have found, with the guidance of many great women and men, space for creativity and the scope to reach outside of libraries and into the world of the people who our laws should protect. It is encouraging to be entering the job market as a woman at a time when efforts are being made to diversify workforces. As we diversify our workplaces I hope that we will collectively utilise the opportunity to learn from the different perspectives that diversity brings. For one, it surely helps to have people on your team who can see the dinosaurs through the trees… or perhaps at least someone who can commit to a metaphor until the bitter end.

Perhaps the greatest lesson from the Origami adventure came from the YouTube comments section. Like beauty, success is in the eye of the beholder.

SteveCraft: “Came out quite lovely. Only problem I see is the legs tend to splay out a little. But it was fun to make. Thank you!”

Dinojoyrous20: “This is amazing!!! Mine can even do the splits”