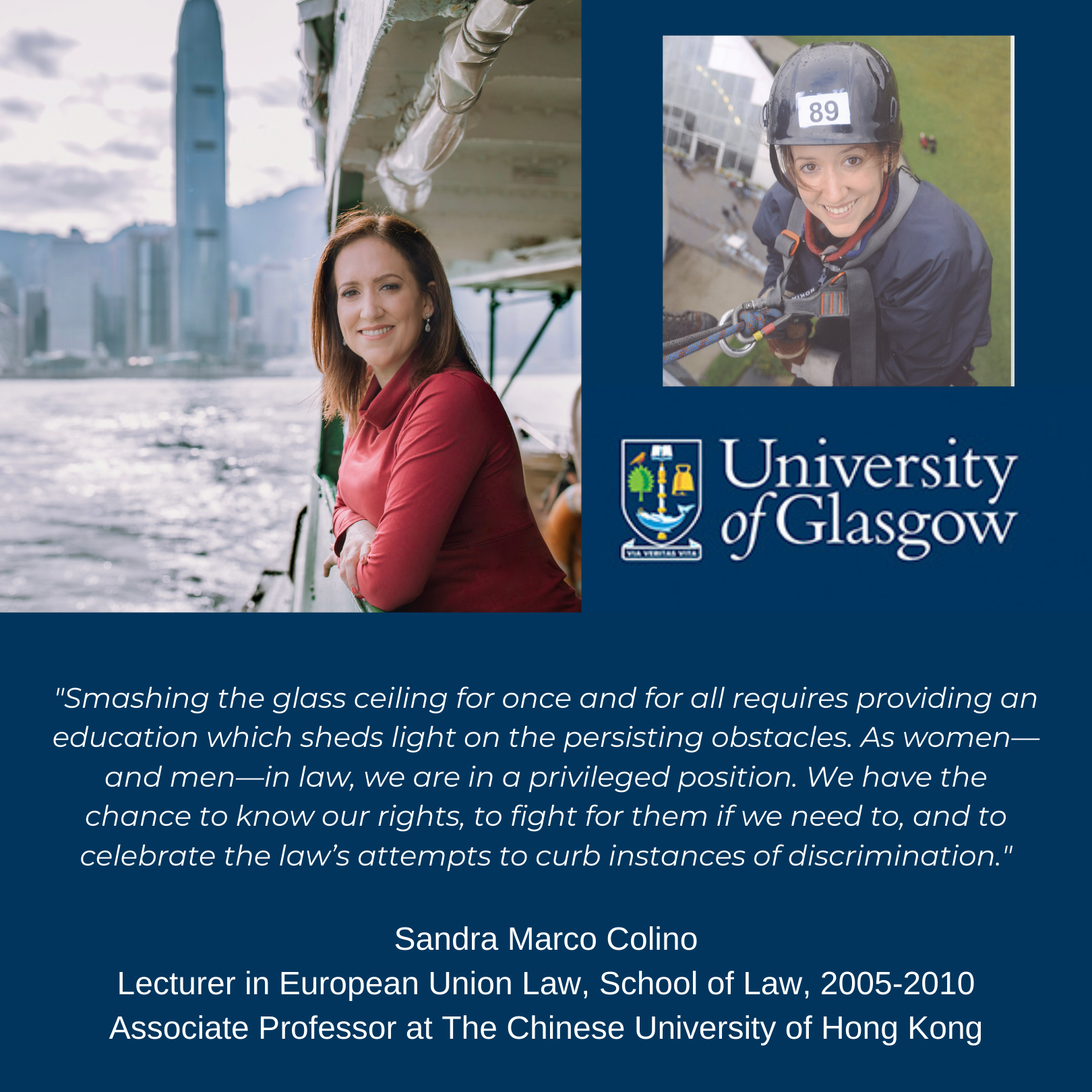 I started my academic career at Glasgow Law School in 2005, when I was in my late 20s. That summer I was about to complete my doctoral studies at the European University Institute in Florence, and as much as I loved the Italian lifestyle, I was homesick. I am Spanish but I moved to London with my family when I was just 11 years old, and was eager to return to the UK after spending an entire decade away. I took to job hunting just as Glasgow University was advertising a lectureship in European Union law. As luck would have it, the School was looking for someone with expertise in both EU and competition law, which were the main research areas of my PhD. I was thrilled to get an offer only hours after the interview, and decided there and then that I would pack my bags and move to Scotland.

Getting accustomed to academic life was a steep learning curve. To this day I cherish the collegiality and support I was consistently offered by those I worked with. Right from the outset I was entrusted with demanding tasks and responsibilities which, while daunting at the time, provided me with the experience and confidence I needed to grow, and prepared me to take on more challenging roles later on in my career. In 2009 I had the opportunity to spend an entire semester as a visiting scholar at the University of California in Berkeley, focusing solely on research. Since academia is very much a ‘publish or perish’ endeavour, being afforded the time to write is essential for progression. I managed to complete my first monograph, and took on the task of writing the seventh edition of the textbook Competition Law of the EU and UK, previously authored by my colleague Mark Furse.

Unbeknownst to me at the time, the five years I spent in Glasgow set the stage for my move to Hong Kong. My colleagues in the Law School had links to various academic institutions in China. My first ever trip out here was in 2008, when I co-organised a conference in Chongqing with Mark Furse and Rosa Greaves. I became increasingly interested in the competition law developments happening in Asia, and discovered that Hong Kong was mulling over the introduction of its first cross-sector antitrust legislation. A very tempting opportunity came up at the newly established Faculty of Law of the Chinese University of Hong Kong (CUHK) which would allow me to move to the city at the very outset of its competition history. I left Glasgow with a heavy heart in August 2010, convinced that I would come back once my original three-year contract at CUHK had come to an end.

A decade later, I am still in Hong Kong. I could never have imagined all the exciting opportunities that would come my way in this part of the world. The optimal timing of my arrival allowed me to acquire hands-on experience in the adoption, policy development and enforcement of the Competition Ordinance, passed in 2012 and in full force since 2015. I was one of the first Non-Governmental Advisors to the International Competition Network to be appointed here. My familiarity with EU law has also been extremely useful here. Together with colleagues from various local academic institutions, we won a bid to set up the European Union Academic Programme in Hong Kong, a project co-funded by the European Commission. I was responsible for Law Outreach, and was able to organise events and develop close institutional links with leading EU universities. In 2019 I was promoted to Associate Professor and was granted tenure at CUHK. I still miss Glasgow dearly and hope to go back to the UK in the not too distant future, but for now I am enjoying the work I am developing here. I have also become addicted to the city’s beautiful hiking trails.

As a law student, and subsequently as an early career academic, I had limited awareness of the issues women face in their careers. Most of my classmates at university were women, as were many of those who taught me (I did not notice at the time that they often held less senior positions than their male colleagues). In Glasgow I was lucky to have inspiring women mentors, including the then Dean Noreen Burrows, Rosa Greaves, and Maria Fletcher. Looking back, I wish my younger self had been more conscious of the difficulties women encounter when it comes to reaching the top of their professions and getting the recognition they deserve. As long as we remain oblivious, we may unintentionally be part of the problem.

Smashing the glass ceiling for once and for all requires providing an education which sheds light on the persisting obstacles. As women—and men—in law, we are in a privileged position. We have the chance to know our rights, to fight for them if we need to, and to celebrate the law’s attempts to curb instances of discrimination. Yet the dose of reality we get through the study of specific cases reveals a much bleaker picture. In practice, the problems are far from being eradicated, and even when equality in law is achieved it does not always translate into equality in fact.

There is a huge sense of personal relief that comes with being at a point in my career in which awareness on the one hand and job stability on the other allow me to voice these concerns. It is crucial for those of us in that fortunate position to do all we can to trump gender bias. We can do this by speaking up when we witness discriminatory actions: all too often, a woman’s opinion is ignored, she is interrupted or silenced, or she is treated unfairly. Moreover, as legal educators it is also our duty to transmit this awareness to the future generations of professionals that we are so lucky to interact with. Ensuring equal opportunities in the legal world will be in their hands in a not too distant future. In this context, at CUHK we are currently running a Female Legal Leaders seminar series, inviting women who have made it to the very top of the legal profession to discuss any gender issues they may have encountered in their careers. Their invaluable insights encourage students to reflect on these crucial matters, thereby hopefully increasing their consciousness.