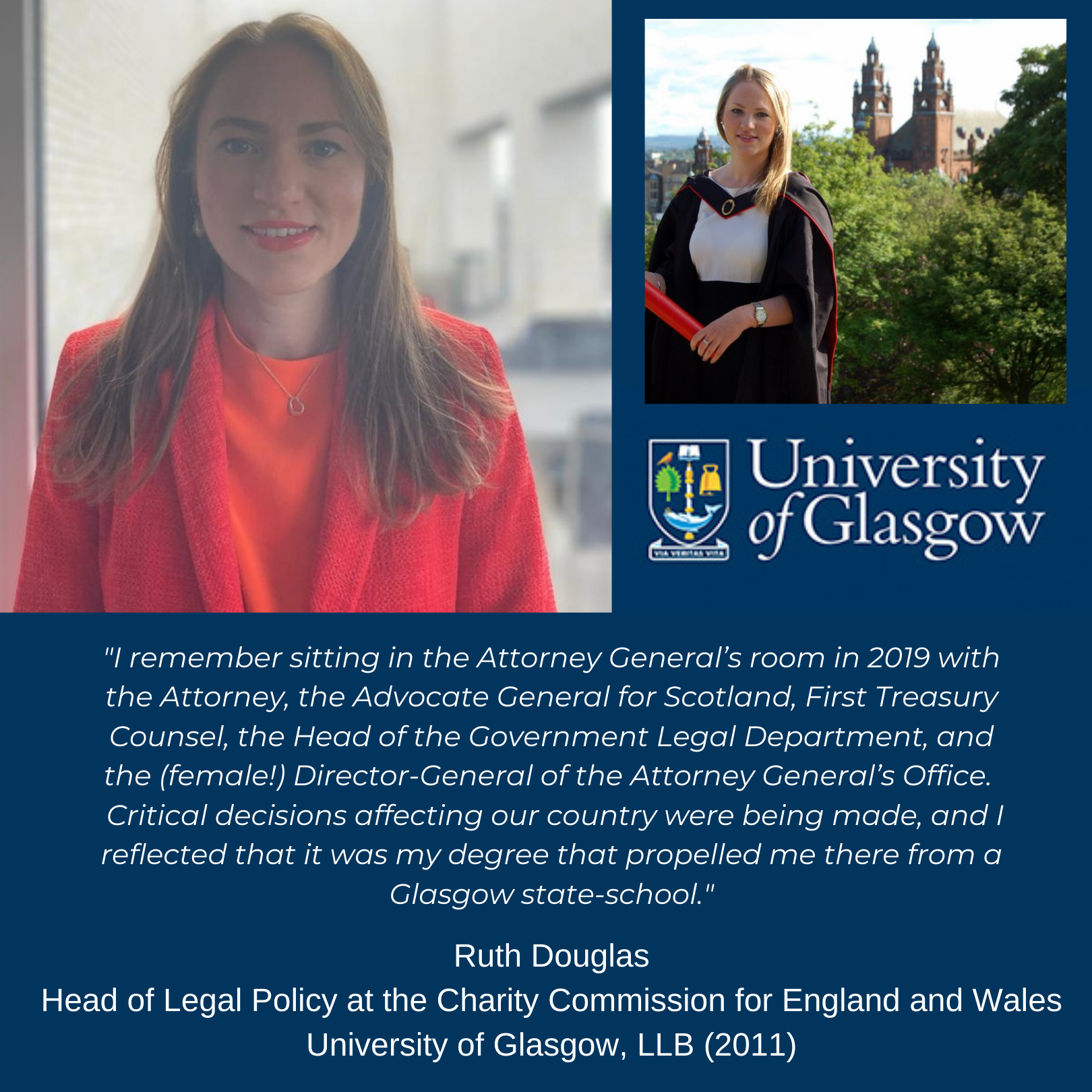 “We call upon our sisters around the world to be brave — to embrace the strength within themselves and realise their full potential.”

I loved my 2011 LLB graduation-day at the University of Glasgow.  I stood on the lawn next to the School of Law Stair Building with my wonderful mother, father and grandmother and we had a toast in the sun with some fizz and strawberries; all beautifully organised by Ellen Gallagher, the then Law Workshop librarian.  Surrounded by friends and tutors, I recognised I was privileged to be part of such a great community.

Those four years gave me a tight-knit group of bright and fun-loving female friends who are still some of my best friends today.   Moreover, the School of Law gave me a solid understanding of my place as a citizen within Scotland, the UK, Europe and the world.  From learning about the sources of Scots law to the successes and shortcomings of the United Nations, I learnt about the ‘rules of the game’ and the rights and responsibilities we have as individuals and institutions.  Spending third year abroad in the Netherlands, at Maastricht’s European Law School, was also fairly transformative in formulating my broader worldview.  My gratitude extends to the late John Brown for his guidance and his exceptional commitment to furthering study abroad opportunities in the School of Law.

The individual course that had the most impact on me personally was the European Human Rights Project.  Under the stewardship of the great Professor Jim Murdoch and Maria Fletcher, five of us (the applicants) brought a mock ‘case’ against five other students (the UK Government) to the European Court of Human Rights in Strasbourg.   We had to develop strong critical thinking skills to argue novel points of law on a wide array of issues to ‘act’ on behalf of the unfortunate ‘Mrs Giesball’.  To this day, I use the skills honed then in human rights, legal analysis and in creative thinking.

After qualifying as a solicitor, I worked advising the Scottish Government in Edinburgh and then in the heart of Whitehall for UK Government Ministers in the Department of Health, the Ministry of Justice and the Office of the Advocate General for Scotland (including on the landmark UK Supreme Court prorogation case).  I currently work as a lawyer to the Charity Commission for England and Wales.  One of the most stimulating aspects of my career to date is being asked to advise on various novel, complex, high-profile and politically sensitive issues in service of the public.  I remember sitting in the Attorney General’s room in 2019 with the Attorney, the Advocate General for Scotland, First Treasury Counsel, the Head of the Government Legal Department, and the (female!) Director-General of the Attorney General’s Office.  Critical decisions affecting our country were being made, and I reflected that it was my degree that propelled me there from a Glasgow state school.

I enjoy the intellectual challenge of my role and I am grateful for the women who have paved the road before me.  Reading the 100 Voices [series] has been a real joy and motivation.  Madge Easton Anderson is an inspiration not only for being the first female lawyer in the UK, just 100 years ago, but also for her commitment to providing free legal advice to those in need in Glasgow - using her education for action.  Indeed, many of the women that I know with a law degree are beacons of that commitment across different facets of society – whether as a defence agent or a humanitarian adviser.  It chimes with some of my favourite words from Maya Angelou:

One of my grandmothers joined the Women’s Royal Naval Service at 19 and the other worked in a munitions factory in Glasgow.  Women have long played an important role in society both domestically and at work.  It’s clear we cannot succeed if half of us are held back.  I’m pleased to celebrate 100 years since women’s ‘permission’ into the legal profession and acknowledge the upward trajectory since.  At present Europe has some of the highest representations of women in law.  In my legal education and professional career to date I have also observed a female law professor, Head of Law School, CEO, First Minister, Prime Minister, QC, Court of Session judge and President of the UK Supreme Court.  I haven’t felt barriers personally as a woman in law and have been fortunate enough to have been put forward for great opportunities such as working in the United Arab Emirates for six months during my commercial traineeship.

However, I also recognise that women don’t yet have parity, and the disparity is greatest at the intersection with class and ethnic background.  I remember a Partner taking me aside during my summer placement to make clear that I must not rest on my laurels as there had been an equal gender intake for her LLB many years ago but that had not translated to equality at the top.  There are still significantly fewer women in positions of power and influence in Scotland and globally.  I think society has, however, become more aware (and less tolerant) of unequal power dynamics and the pervasiveness of harassment and ‘harmless’ misogyny across sectors which subordinates women.  There’s also increased awareness of the benefits of diverse teams and leaders for value creation and success.

I am conscious that one of the critical pinch-points for gender parity in the legal profession is parenthood.  It’s been interesting to hear different Voices in this project reflect on this.  My own view is that the profession needs increased opportunities for flexible working and job-shares for both men and women.  My mother negotiated a job-share in nursing almost 30 years ago.  It is, however, still rare within law in 2020.  However, progress is being made and within government I’ve seen senior female lawyers in a successful job-share and lawyers of both sexes work compressed or flexible hours to share child-care or to pursue outside interests.  Further progress would mean people don’t need to de-select from the workplace or a promotion and we can achieve more meaningful equality.

With help from my incredible sister, who is also a solicitor, I’ve learnt to work hard, be kind, have fun and just do it.  I am proud to be a woman in law because, in the words of Malala Yousafzai:

“There are two powers in the world; one is the sword and the other is the pen. There is a third power stronger than both, that of women.”