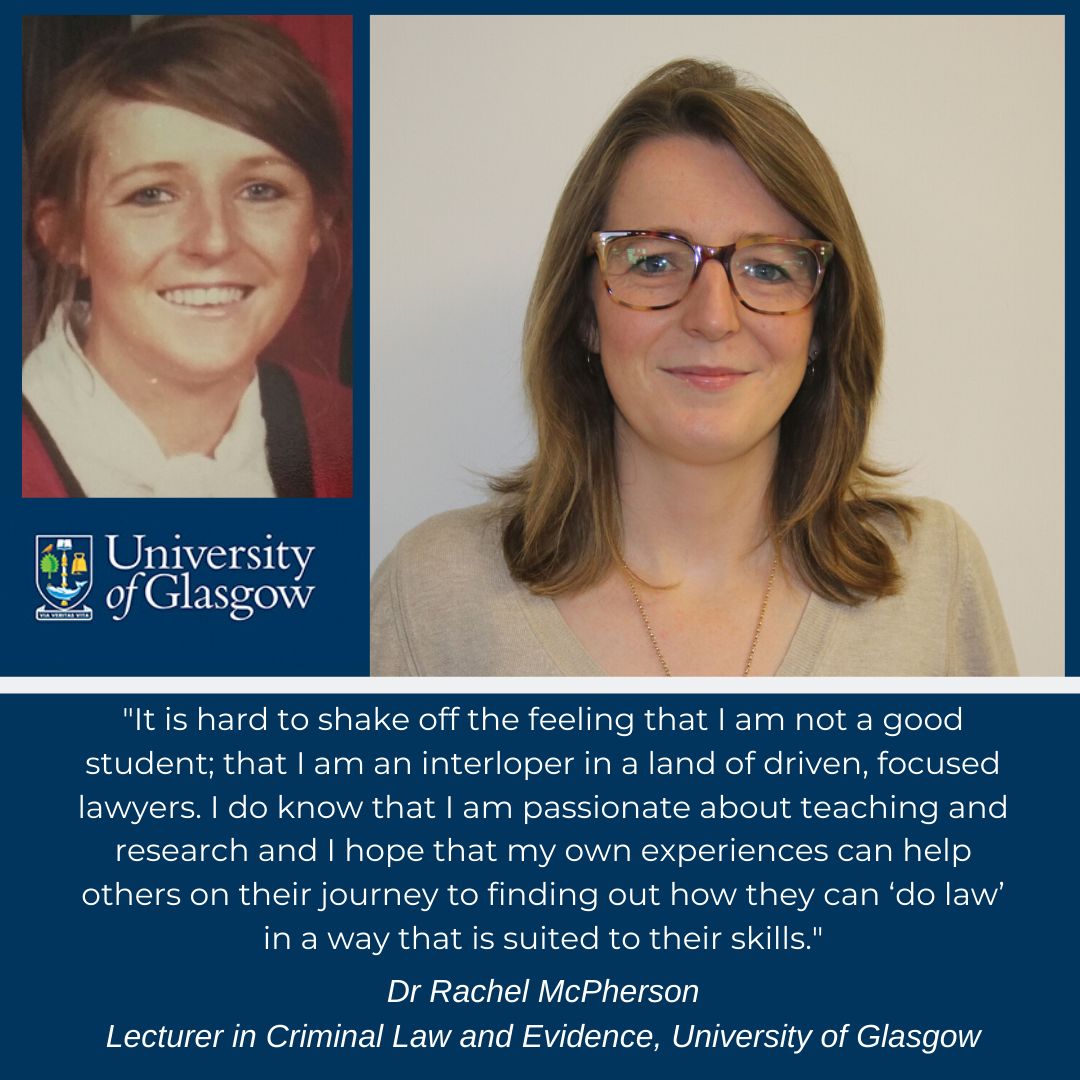 Following my exam results at school, I was encouraged to apply to study law with little advice about what other options were available. I will admit that I had no passion to become a lawyer. I started the University of Glasgow after a particularly difficult time in my personal life (in hindsight, I think it would have been better to have delayed my entry) but felt relieved on my first day to be placed in a group of ‘McPs’ as there I met Fiona McPhail who has remained my best friend and gone on to become my inspirational woman in law as principal solicitor at Shelter Scotland. Yet despite this valuable friendship, my first year of university was a battle against feeling constantly terrified and overwhelmed and out of place amongst a very determined, focused group of students.

Second year was even worse, when these feelings were coupled with a complete lack of interest for almost all of the professional subjects I was being asked to undertake. This combination resulted in me avoiding classes and the University as much as possible. I became completely disconnected from the whole experience. Unsurprisingly, this resulted in me being asked to resit most of the core second year courses before being allowed to progress to third year. The resit year brought with it a capacity to undertake a year-long course in English language. I had always wondered whether a degree in English would have been a better choice for me and so this was an interesting time of reflection for me.

Although I enjoyed the course a great deal and excelled for the first time at University, I was also provided with the insight that that other degrees would similarly involve less enjoyable aspects. As such, I resigned myself to trying to complete my legal studies, especially in the knowledge that I would be able to have more control over my subjects moving forward. I still found studying law very stressful, but I was increasingly interested in the material I was being asked to consider and inspired by my teachers, especially those in Criminal Law. In fourth year I was able to undertake an honours course on Domestic Violence which introduced me to critical feminism and subject matters which remain of great interest to me. After I completed (survived?) my undergraduate degree, I applied to do a Masters in Research in Law, feeling that this would allow me to study my areas of interest in more detail: gender and law, critical theory and socio-legal research and following my postgraduate degree, I was asked to tutor on Criminal Law and Evidence and became involved in a number of research projects at that time. I felt I was finally able to ‘do’ law in an enjoyable way. It was during this year of working as a research assistant that I met Dr Rhonda Wheate, who would later become my PhD supervisor. I feel eternally grateful that our paths crossed that year. Rhonda has been a great mentor and friend to me throughout my academic life: she has been a constant source of positivity, gently encouraged me to do things that terrified me and believed in my abilities when I didn’t believe in myself. She is still often the first person I look to for advice.

I found the process of completing a PhD a fantastic experience, not least because I felt my confidence beginning to develop for the first time. I loved being able to plan my own project, work flexibly, and spend time interviewing some of the country’s leading advocates and judges. I felt inspired by the feminist networks I was involved with and became deeply passionate about law and social justice. When it came to submitting my thesis three years later, I was 37 weeks pregnant with my first child and a year and a half later, I had two children under the age of two. Life had changed rather dramatically and the next four years involved part time hours and mostly teaching work. The researcher in me was frustrated but I also enjoyed (for the most part) spending time with my children whilst having the option to engage in flexible work related to my interests. I also felt relief at having minimal responsibility during this time, suffering as I was from serious sleep deprivation (a low point being when an exchange student asked me who the prime minister was and I didn’t know...”David something”…). I was also fortunate to have Professors Jane Mair and Fiona Leverick continue to offer me interesting work opportunities and not allow me to be forgotten about during this time of low visibility (and poor political knowledge).

Although I am working full time now, the reactions I received to working part-time and balancing motherhood were largely positive. I remain continually encouraged by senior staff (male and female) who make a point of identifying their own family needs and time limitations without apology. Those who know me will know that I reference my family life a lot; clearly my children are significant to me, but I also think it is important to be part of a dialogue which references our demands -rather than pretend they don’t exist- whether those demands are children, caring for parents, illness or some other aspect of our personal life that requires us to have some degree of flexibility. Flexibility is not short hand for working less.

When working as an unqualified legal assistant during my undergraduate degree I did experience and witness explicit sexism and prejudice (something which added to the feeling that I was not cut out for legal practice) but up until last year I had not encountered any explicit sexism in an academic setting. My recent experience left me frustrated and angry at my own reaction (which was to leave an outrageous comment unchallenged) but it also left me very surprised since it was so a-typical. I remain cautiously optimistic but am nevertheless aware of the areas in which women’s careers continue to face additional hurdles.

I am delighted to be working amongst a staff which includes those teachers who inspired me to pursue my interests in criminal law. But it feels strange to now work at the University of Glasgow. It is hard to shake off the feeling that I am not a good student; that I am an interloper in a land of driven, focused lawyers. I do know that I am passionate about teaching and research and I hope that my own experiences can help others on their journey to finding out how they can ‘do law’ in a way that is suited to their skills.