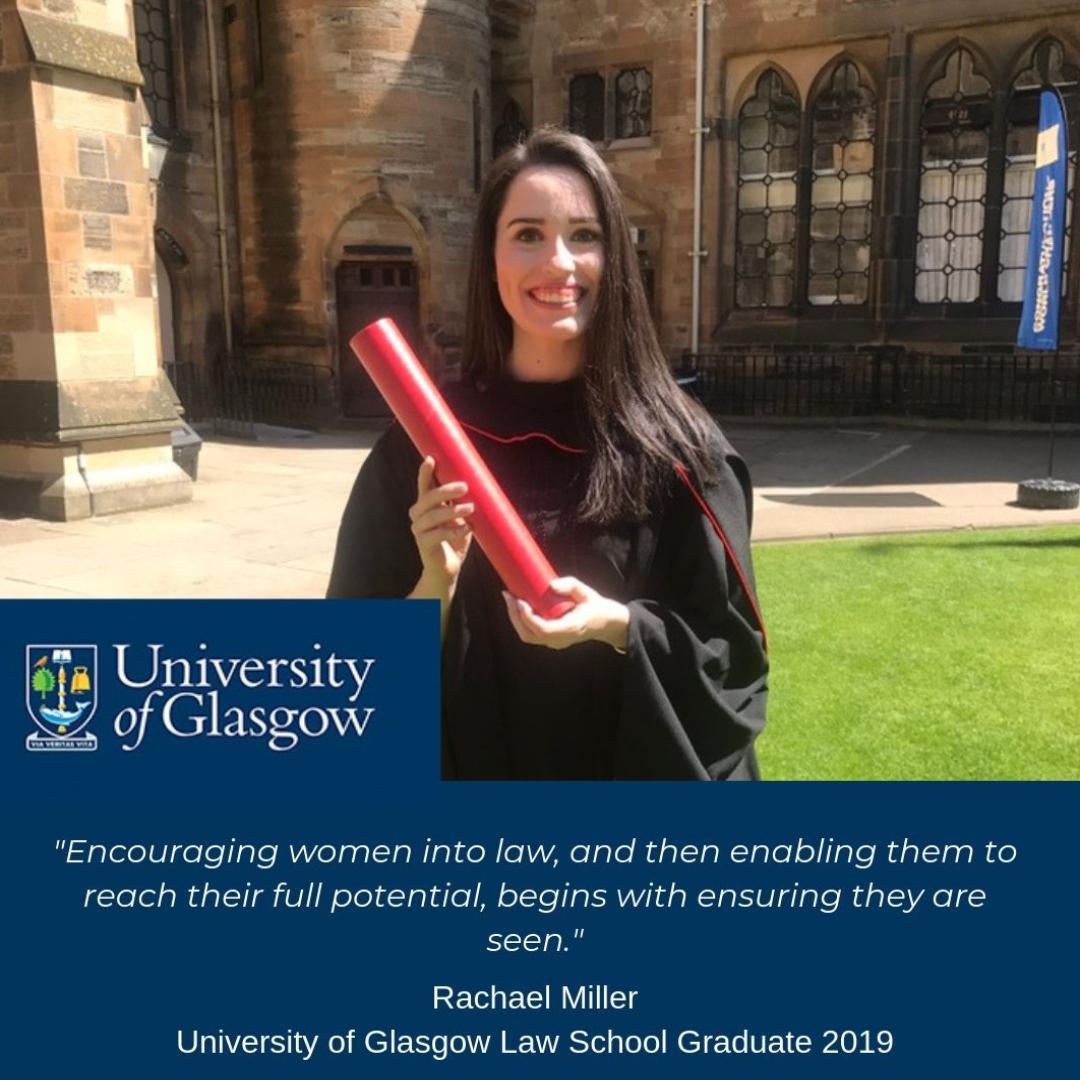 I completed my LLB at the University of Glasgow this year and I am passionate about the visibility of ‘women in law’, which noticeably increased during my legal education, a development from which I am fortunate to have benefited.

I was lucky enough to be appointed as the Mooting Society President in 2017-18, and initially worked with Dr Bogle who made clear to me how keen he was to encourage particularly women graduating from the School of Law to consider advocacy as a profession - at present, only around 25% of the Scottish bar is female.[1] Simply hearing this from a respected academic felt very important when, despite knowing better, we can still often imagine an advocate to be the stereotypical aging white man. In the summer before that academic year began, the Law School hosted an advocacy training day and we benefitted from hearing from several female advocates, who in addition to giving workshops on various advocacy skills, discussed various challenges facing women at the bar - such as maternity and motherhood - frankly but with positivity. We also heard an inspiring keynote speech from Lady Carmichael on the progress which has been made, and how far there is to go, for female advocates. This was an encouraging day and was, for me, an essential reminder that no area of the law is off-limits. This may seem to be reaffirming what should be obvious, but I believe that the importance of seeing and hearing from successful people in whom you can see yourself reflected cannot be underestimated. As has been said in equality movements relating to all manner of careers - “you can’t be what you can’t see”.

That slogan has an important literal meaning. I love the staircase in the Stair Building which displays portraits of the first five female Professors (although I do find it somewhat bittersweet given that, as Professor Leverick has noted,[2] there are now only four female Professors at the School**) because their presence helps normalise women’s place in the teaching of a subject which can still feel overwhelmingly male - the institutional writers who we are told laid the foundations of our law are inevitably men, but the cases, textbooks, and articles we read are also predominantly authored by men. Of course this is now changing, and I feel incredibly lucky to have been taught by many brilliant, engaging female academics at Glasgow. It isn’t necessarily the case that we actively notice the lecture or seminar is being given by a woman - but I again think there is something very empowering, even at a subconscious level, in seeing someone like yourself in a position which you can then aspire to be in. And as the work of feminist legal theorists shows, women being well-represented does lead to new and necessary ideas. Given the important contribution of women, then, five photographs might actually feel like a bit of a raw deal - especially when the Law Workshop, where students spend a lot of time, is adorned with photographs of mostly men and the Moot Court has exclusively pictures of men. Incidentally, this problem in our Moot Court is replicated on a much larger scale at the Supreme Court - when the Deans Cup final was held there in 2018, I was struck by the fact that, aside from a portrait of the Queen, I did not see a single woman among the many grand portraits of almost identical men. Although the Court now has more women than ever on the bench and is led by the brilliant Baroness Hale (whose voice on the topic of women in law I have found inspiring throughout my studies) the courtrooms are still literally surrounded by men. One thing highlighted by the discussions around the centenary of women in law is that our legal history is full of pioneering and intelligent women - honouring them through portraits, as well as actively discussing them as has been done throughout 2019, helps bring them into our collective consciousness, reminding us that they were there and thus enabling us to build on their work. In this endeavour it seems much remains to be done.

Returning to the Stair Building, part of the work for 100 Years of Women in Law has included more pictures, displaying portraits of the ground-breaking Madge Easton Anderson, Rose Heilbron and Helena Normanton in prominent places. These genuinely made me smile every time I passed them. They are wonderful images of women who appear so confident in themselves and their abilities - and seeing them every day mattered. I hope that these additions won’t be lost at the end of the year and the centenary project, just as I hope that the focus on celebrating women in law will not end as the year ends. Encouraging women into law, and enabling them to then reach their full potential, begins with ensuring they are seen.

** Since this article was published, the School has appointed a fifth female Professor, Professor Irene-Marie Esser.