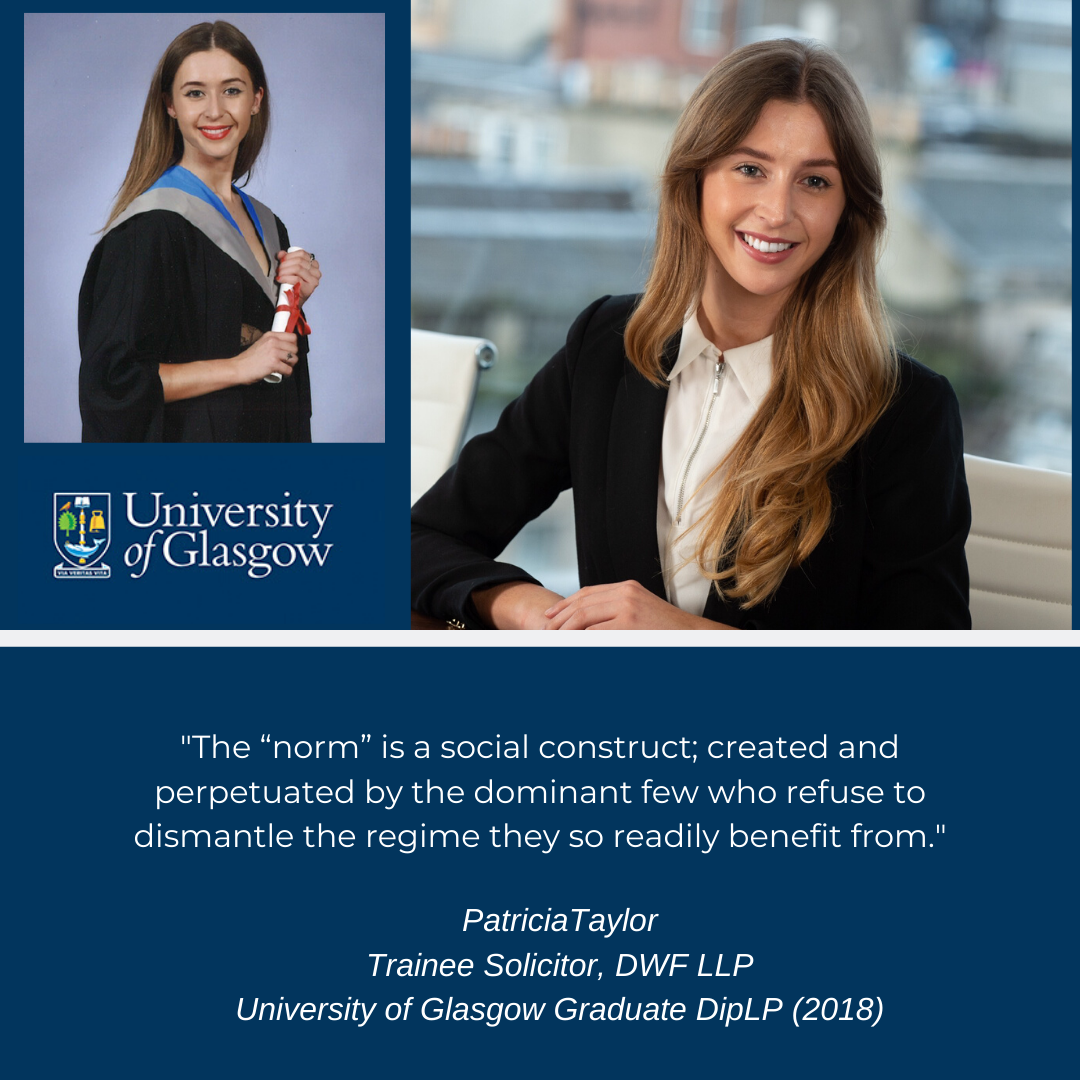 At the time of writing this piece, it is Saturday 4 January 2020, which means it is around one month since I started to conceptualise my submission for the 100 Voices for 100 Years project. In that same month, I voted in 2019’s General Election, attended an event in anticipation of the centenary of women in law, watched the valedictory remarks of Lady Hale, and observed as our sector celebrated 100 years since the passing of the Sex Disqualification (Removal) Act 1919.

The possibility that such a month could occur, and so junior in my career, can only be attributed to the remarkable women this project seeks to honour. I appreciate that those events outlined above are privileges, when viewed in contrast to the opportunities afforded to those women who came before me.

It is not out of complacency that time has passed since I started to pen this piece. Quite the opposite. Not only did I want to portray the utmost gratitude to the women who got me here, but also bring more of my journey to the fore (something I often shy away from discussing). This story is in no way unique, but from my experience is less well voiced, particularly in the business world. When writer’s block hit, I turned to my biggest confidante, my mum. She advised me to write this story for my sixteen-year-old self; for the girl who was convinced, despite it being her dream, that this career wasn’t “for her”.

I frequently remark that being accepted into law school was nothing short of a miracle, with my fifth-year exams falling at the most turbulent time of my teenage life. By the time my Highers rolled around, I knew more about making a benefits application for my parents than I did my coursework. Despite straight A’s having been projected, my results at first sitting were nothing to write home about. As a corollary to family circumstances changing, and indeed worsening, so did my academic record. This, coupled with having very little intel from school into a future involving university, left me convinced that others were perhaps better suited to a legal career, or that it simply wasn’t “for me”.

Alongside this however, I was observing the efforts of my wonderful mum and gran, who threw everything they had into keeping food on the table, a roof over our heads, and supporting my dad who could no longer work. I knew I had to do the same. My biggest challenge became my biggest motivation and continues to fuel my ambitions to this day. I rekindled my objective to study law and to further understand the system that surrounds me. Turns out it was “for her,” and after a gruelling sixth year, I met my entry requirements and began my life in law.

As the first person in my family to enter higher education, this was an exciting, albeit humbling, advancement. In addition to a wonderful education, university furnished me with previously unimaginable opportunities and experiences. A few notable examples include: contributing to the indispensable work of my university Law Clinic; representing Scotland in the Brown Mosten International Client Consultation Competition in Maastricht and placing second in the world; spending a semester abroad in Lyon, France; and eventually graduating top of my year, with a First Class Honours degree. Turns out, it was indeed, “for her”.

It is important, however, to reflect upon this time honestly, for working towards a career in law can often feel like sailing into unchartered-territory. It is sleepless nights over funding your Diploma. It is being proud of who you are and the community you come from, met with the hesitancy of citing this on traineeship applications. It is broadening your horizons, and potentially changing your life. It is also learning more about the likes of Madge Easton Anderson, her courage, and the change she ignited for generations to come. It is realising that once in the profession, it might still, in 2020, be different for you because you are a woman. It is recognising that the legal sector is changing, but that this dialogue remains necessary. It is challenging “the grip of the accident of birth over future success”. It is the inspiration to take your seat at the table, join the conversation, and continue to effect change.

I have always regarded the opportunity to pursue this career as a privilege, and now, as a junior member of the profession, I know that to be true. The honour is only heightened when I think about being a woman in law. I now stand on the shoulders of giants, because they made it possible. The impact created by the equality advocates before me is palpable, as are the cracks emerging in the age-old glass ceiling.

Although celebrating these successes is of unequivocal importance, it is not damning of progress so far to note that more can be done. The likes of Madge, a woman who helped legislatively establish that a career in law was and is “for her”, would want us to take the win, but keep the momentum. I see the determination of my female superiors; still striving to make their mountain taller, whilst ensuring that those who follow can more easily reach their own summit. Their fight is also my own, and in order to adequately prepare oneself for any battle, we must acknowledge what we’re up against.

I began to realise the weight of stigmas attached to those who share my story, and our capabilities, at high school level. Now, almost ten years on, “unconscious bias” remains the buzzword of today’s equality roundtable; factoring in, but not limited to, social mobility, gender, and race. Still, for some, an individual’s potential remains synonymous with these factors; tied to their learned perception of them, as though they are something “for her” to apologise for. These biases can permeate promotions, pay, workload assignment, and even just getting your foot through the front door. Perhaps this is why women make up the majority of the profession, yet hold only 30% of leadership roles, decreasing to 4% for BAME candidates.

This makes it impossible, for those subjected to unconscious bias, to bring their entire self to work, perhaps for fear that they may differ from the “norm”. Yet, much like the barriers it presents, the “norm” is a social construct; created and perpetuated by the dominant few who refuse to dismantle the regime they so readily benefit from.

Perhaps this was my personal blockade to penning this piece.

Some companies are attempting to address this through the adoption of what has become known as the ‘business case’. This initiative recognises a diverse and inclusive workforce as a contributor to business prosperity. By consciously placing women in positions of power, visible role models emerge, in addition to the benefits borne from possessing a more diverse workforce. Although a step in the right direction, a company is only ever as good as its people. What good are policies and procedures, when the minds implementing them have no belief in them, except to benefit the bottom line? Morally, we must confront these systemic biases, so that innate characteristics, challenges and triumphs are firstly celebrated in their own right, rather than for economic leverage.

Let us continue to build upon the great work of our predecessors. Let us create a space where the new “norm” is comfortably bringing our whole selves to work. Let us, in another one hundred years, look to a sector where the “business case” is a moral one, and where diversity is not only celebrated, but represented by those we aspire to be.