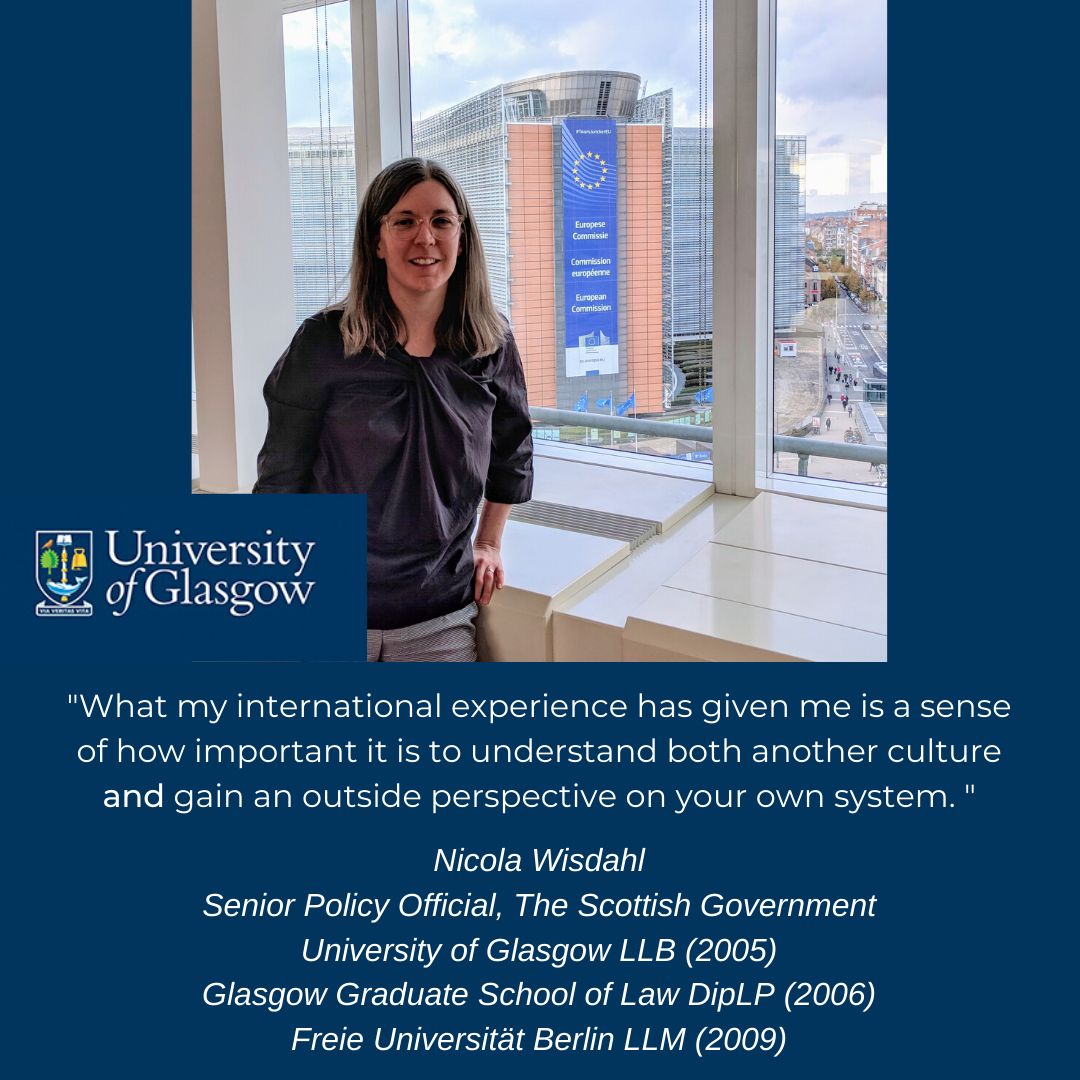 Although I qualified as a solicitor in 2008, I have actually only practised for less than 5 years. Despite this, my time at the University of Glasgow law school seems to have prepared me well for the career I’ve had so far – possibly partly by accident than entirely by design. In 2001 when I turned up for what I thought was my combined German and Law degree, I realised that the balance was heavily in favour of law and wondered what I’d signed up for. Between that and being too young to join Blockbuster Video on Byers Rd – never mind get into various bars - I did consider giving up and going home…all the way to Edinburgh. Still, the first couple of years went by quickly – lots of nights out, exams, and time spent in both the library and in internet cafes keeping up with friends (both old and new) via MSN messenger.

Those first couple of years were tough but by third year, it was time for Erasmus. In my opinion one of the major contributions Glasgow law school has made to the Scottish legal profession is the broadening of our collective horizons by Erasmus and other study abroad programmes. Erasmus offered not only a chance to understand other perspectives on law and language, it gives me and other students time and opportunity to experience another culture, which EU funding helped make affordable.

My year in Berlin was probably the first time I felt like law as a discipline could suit me. Sitting alongside friends from across the continent, I was able to focus on subjects with an international focus: e.g. diplomacy and EU law, all in German – even more of a bonus! Erasmus whetted my appetite for Berlin, which remains one of my favourite cities in Europe. Several years later, having finished my traineeship, I returned for an LLM at the same university, with a specialism: “Internationalisation of the legal order”.

Thanks to German open access laws, I obtained a Stasi file relating to a notorious Scottish criminal, which was the basis for my dissertation. Research into that remains a side-gig, though the international perspective has remained during my work at the Scottish Government in Edinburgh. I’ve been with the Scottish Government for a decade, interrupted up by a break to spend time in Brazil as an anthropology fieldwork researcher’s plus one. There I learned Portuguese and taught English and German – lots of language practice from all sorts of angles.

The last few years have seen me use international law, EU law, and some of those diplomacy courses in practice: I’ve been working in the Scottish Government’s EU office in Brussels and have been involved with Brexit since the referendum. This time I’m abroad but closer to home. What Brazil, Belgium and Germany have all given me is a sense of how important it is to understand both another culture and gain an outside perspective on your own system.

So much of what has been rewarding about my legal education and career in law has been acting as a cultural ambassador for a way of doing things. Whether it’s contributing to the internal diversity and equality networks of the Scottish Government, or being part of the international society at Glasgow on my return from Erasmus, I’ve always enjoyed analysing the status quo. What I was taught at Glasgow is one thing – and a good basis for the rest – but what I’ve learned (and hope to keep learning) along the way is quite another.