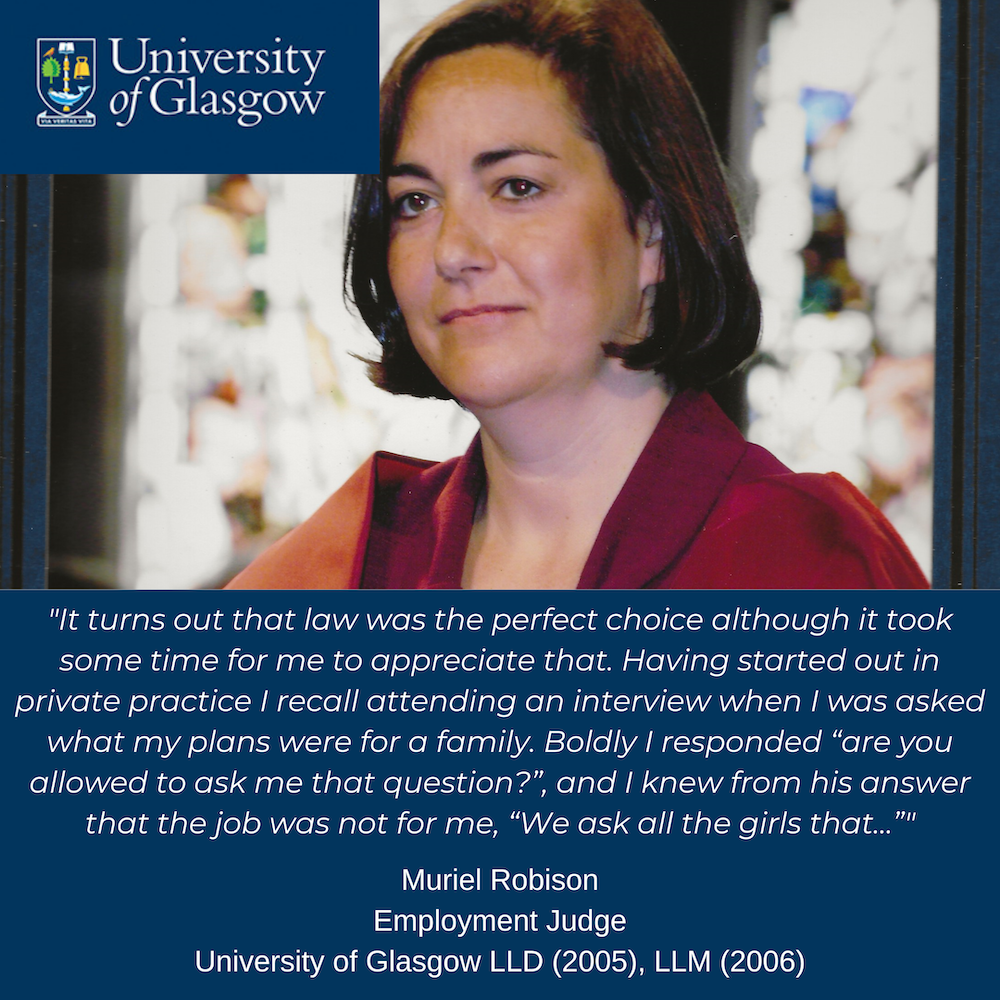 When I reflect on my career I realise that I have been privileged in many respects, and not least by my association with the University of Glasgow, which began rather later than is usual.

I attended the University of Edinburgh after school mainly because of the distance from my home town. No one suggested going further afield because I was studying Scots law, although again that was by default rather than design because I wanted a change from the subjects I had studied before.

It turns out that law was the perfect choice although it took some time for me to appreciate that. Having started out in private practice I recall attending an interview when I was asked what my plans were for a family. Boldly I responded “are you allowed to ask me that question”, and I knew from his answer that the job was not for me, “We ask all the girls that…”

I began to think that maybe a legal career was not the right thing for me after all so I enrolled to study an MBA at the University of Strathclyde. I am embarrassed to admit that I did not even know what the letters stood for, but it seemed a good thing to combine with a law degree. I thought I might embark on an entirely different path.

However, as I was completing my course an advert appeared in the newspapers for a job as the first Scottish solicitor with the Equal Opportunities Commission. I can’t recall now how many of my friends sent me that advert but most people who knew me knew that was the perfect job for me given my particular interest in social justice and especially gender equality.

I soon realised that I had found my niche and it involved being a specialist in an area of interest rather than a “Jill” of all trades, which I personally found much more rewarding intellectually. The role of the solicitor in the EOC was then at least a unique role in Scotland. It involved not just litigation, which allowed me to act as instructing solicitor in all levels of the courts in Scotland including in the House of Lords as was and the European Court of Justice as was, but also to get involved in legal policy, particularly to contribute to the development of what became the Equality Act. I had no reason to move on although in conversations with others it was suggested to me that I should so that someone else could get a “turn” at such a good job.

I have been particularly fortunate in the calibre of women role models around me. It was during my time at the EOC that I met so very many inspirational women, most of whom have become lifelong friends. Morag Alexander, as director in Scotland, was an instant significant influence and also other colleagues involved in policy and practice, particularly Angela O’Hagan, Anne Meikle and Wendy Davies. I am privileged too to have worked with a new generation of feminists, including Laura Hutchison, Helen Miller and Joanna Barrett.

It was rewarding and enlightening to work with lawyers in the jurisdiction of England and Wales, particularly the other solicitors at the EOC, including Pauline Feeney, Vereena Jones, Hilary Slater and Tina McKevitt. We still get together annually to discuss shared interests in law, politics and social justice.

It was also while working at the EOC that I had the very good fortune to work with Noreen Burrows, which was the catalyst for my links with the University of Glasgow. It was through Noreen that I met another cohort of impressive women, not least Jane Mair, Maria Fletcher and Nicole Busby. I was particularly proud to work with Noreen on academic articles and to flirt with the possibility of a career in academia.

I was fortunate to be awarded an honorary doctorate from the University of Glasgow and subsequently to be appointed an honorary professor there. That served to introduce me to another area of interest which is teaching. It was a privilege to work with the next generation of lawyers, and to strive to impart some practical knowledge but mainly in the hope that some of my enthusiasm for the law and especially equality law would rub off.

Working at the EOC also gave me an unparalleled opportunity to instruct a number of outstanding women lawyers, but I was particularly fortunate to work with Shona Simon on a number of fascinating cases which sought to push the boundaries of the law in regard to gender equality.

And on my very first day at the Commission I shared a platform with Doris Littlejohn, already a legend, as the first women employment tribunal judge and then President of the Employment Tribunals in Scotland, whom I had appeared before. I recall very well how on that first day she rescued me in the humblest way by answering a very difficult question about indirect discrimination. It was Doris, and then particularly Shona, who encouraged my interest in employment law.

I have now been appointed as employment judge in the Employment Tribunal, and it is a particular privilege to play a role in the dispensing of justice, and again to find myself working with another circle of impressive women, including Frances Eccles, Shona Mclean, Amanda Jones, Jane Porter and not least Susan Walker.

The judicial role is even more suited to my pursuit of justice since my tendency to always see both sides of an argument has proved to be extremely valuable. And every day is a challenge to strive to ensure that parties leave the Tribunal believing that they have had a fair hearing and their argument respected, even if the outcome is not as they had hoped. I feel privileged but also humbled in having a role in seeking to ensure justice is done and to still to get the opportunity on occasion, however minor, to further gender equality.