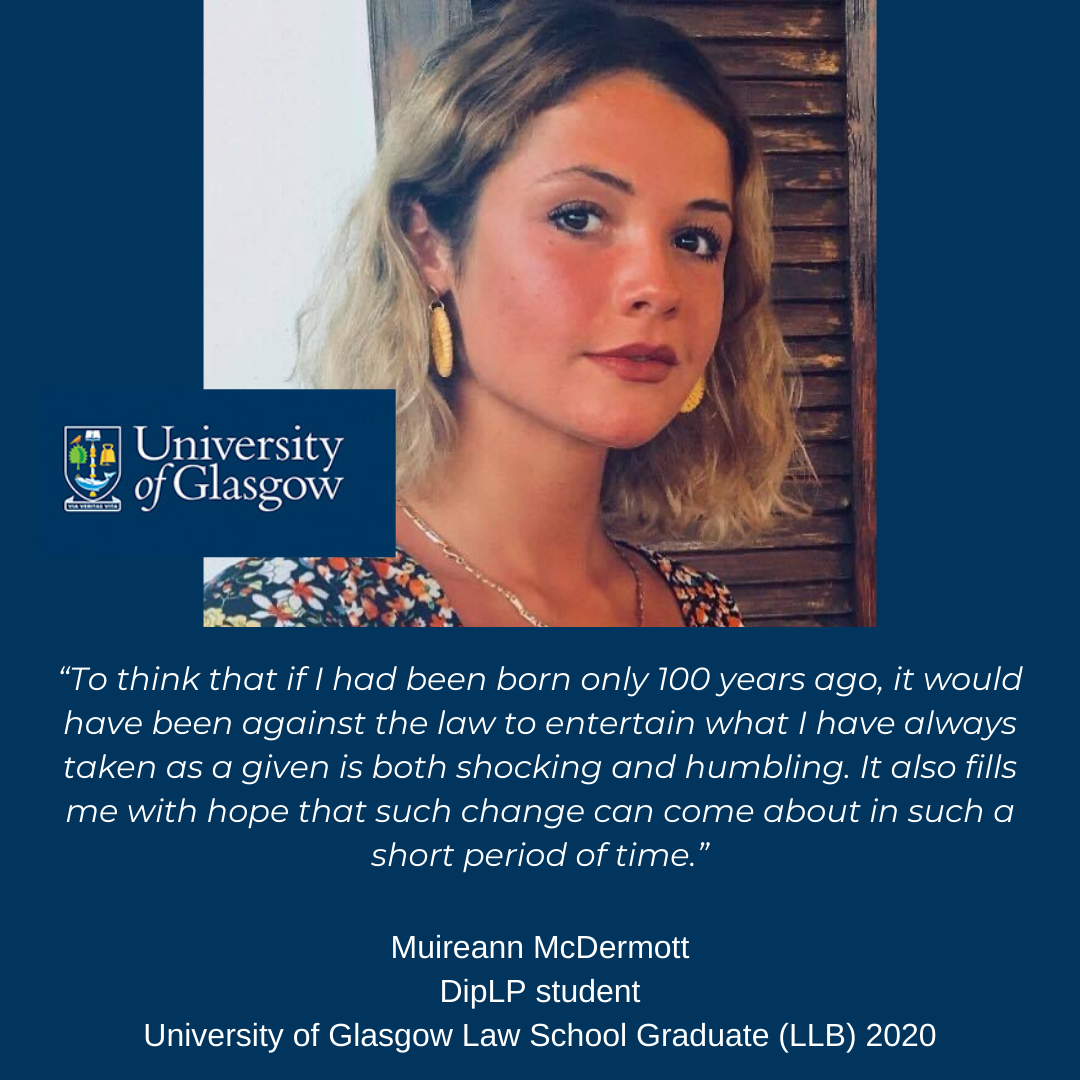 ‘When you get these jobs that you have been so brilliantly trained for, just remember that your real job is that if you are free, you need to free somebody else. If you have some power, then your job is to empower somebody else.’

I am immeasurably grateful to all the women who have paved the way before me and allowed me to be where I am now - a 2020 Law graduate, only 100 years after Madge Easton Anderson was the same. In many ways, it feels absurd to say that, 100 years feels such a short period of time - a year before which woman were not even allowed to join a profession. To think that if I had been born only 100 years ago, it would have been against the law to entertain what I have always taken as a given is both shocking and humbling. It also fills me with hope that such change can come about in such a short period of time.

For me, I wasn’t really sure if I was in the right degree until I started my third year studying. During first and second year it was really my desire to do well which drove me, I wasn’t very interested in the technical – or memorisation heavy – aspect of the degree. It was in my third year that I began to find my feet, with subjects such as Legal Theory, Institutions & Judicial Control of EU and then, in fourth year, Labour Law and Law Justice and Morality. They placed emphasis on challenging societal norms and conceptual thinking and taught me the importance of doing so. The tutors taught me to get very used to debunking ideas I had previously set in stone and for that  I will forever be indebted. I think that that’s something which is going to become increasingly necessary within my generation and those to come, especially with rise of populist nationalism and the prevalence of social media, and its tendency to promote ‘no platforming’ and prevent meaningful dialogue.

It was however the encouragement of two ‘women in law’ who helped me to define what a ‘successful’ - integral, insightful, creative, ambitious, value-driven -  woman is.  Professor Ruth Dukes (who introduced me to my dissertation topic… and an entirely different sociological view of the world...) and Ms. Maria Fletcher (whose enthusiasm and compassion shone through at every possible point) gave me a determination I didn’t know I had.

Within the UK, I believe that involving men more in domestic life is the next biggest challenge that we face in terms of equality of the sexes. Challenging the cultural norms which associate women with domestic/reproductive work and encouraging men to take on a greater share in this unpaid labour would allow women to share real choice and ownership over their life path in a way that men always have. For as long as men have the choice not to involve themselves in this work, women will have no other option but to do so. I feel that broadening the choices and opportunities open to men across all genders and thereby widening the experience of care giving across society as a whole could, in time, nurture a society that is more willing to transform - institutionally and financially – into a society which shares the cost of care.

To this I’d like to add that I think that progress within our country for women (in law, and everywhere) cannot reach its full potential if it excludes men. By this I mean that the demand for women’s equality in a country committed to globalised capitalism and national austerity has lost its emancipatory force if it is not - at the same time – a call for the improvement of men’s livelihood. As the public sector, public services and stable working arrangements continue to be eroded by the government men, as well as women, need to be liberated from an economic system which values the wealth of a few over the social value of the many. Solidarity is critical here.

For me, still at an early stage in my ‘profession’ and coming from a very privileged background – a loving and socio-economically secure family in one of the wealthiest countries in the world – I feel unsuited to adequately answer this question. For the vast majority of women and men in the world attending a University like mine and having the opportunities I’ve had is entirely unfeasible. Even within my own country, my social and economic status in the world make me statistically far more likely to be where I am than so many others. That is not to say I have not been affected by issues which are inherently gendered. I have, and I think that’s a sign of just how far we have to come yet. But I want to end by saying that, where I have suffered at the hands of this, or just poor mental health generally, studying the ways that law contributes to, is complicit in and reinforces the social oppression of marginalised groups globally – and concomitantly the power it has to reverse this – has meant that I really do hope that I never lose sight of that Toni Morrison quote.