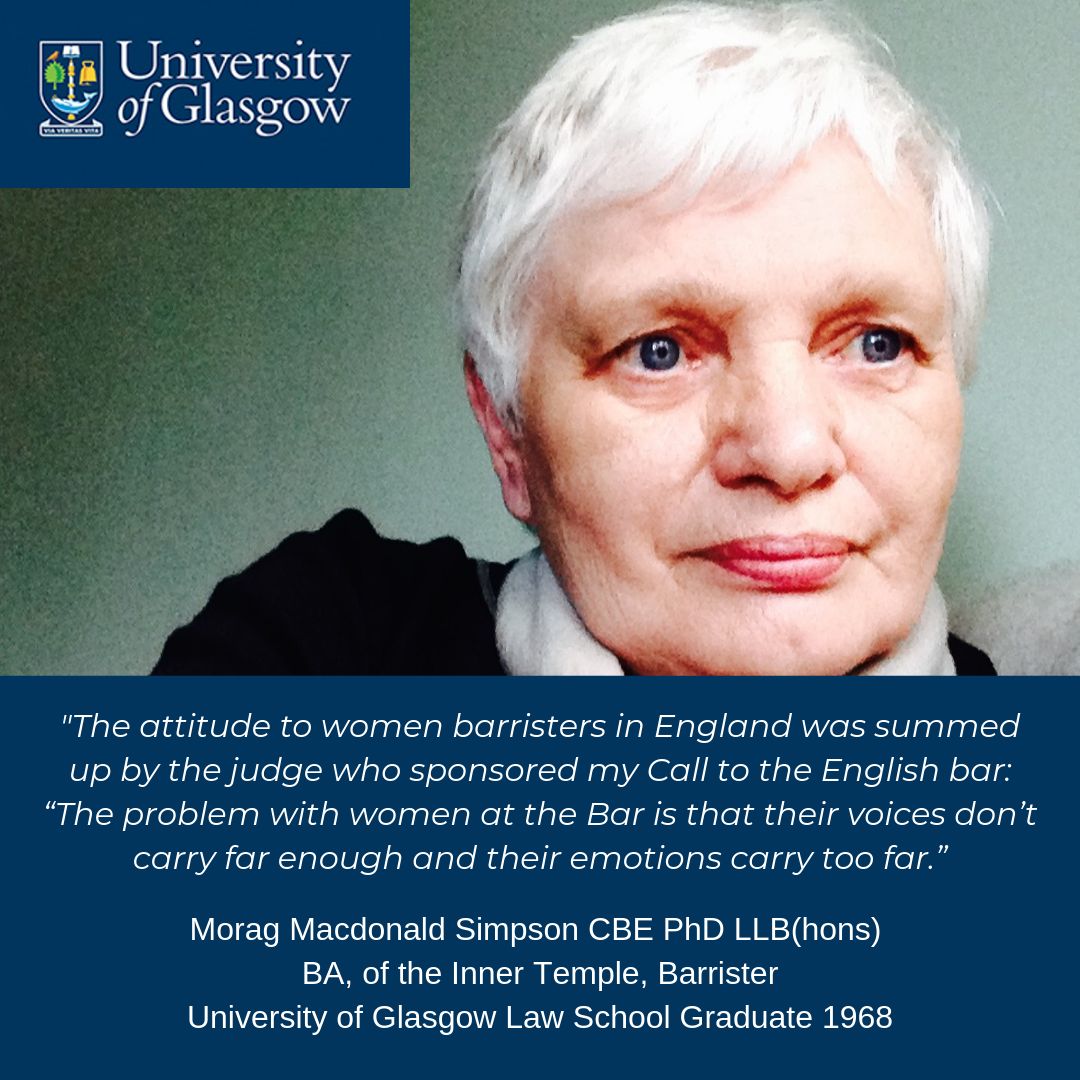 In 1968, I joined what was then the GPO as a ‘management trainee’ and they then subsequently paid for me to study for the English Bar. I was admitted to the Bar of England and Wales by the Inner Temple in 1974 and returned to the Post Office. I spent my career there, and in 1985 became Secretary to the Post Office and a member of the executive board. I was appointed CBE in 1993.

My legal education at Glasgow gave me an abiding love of the law, developed my critical thinking and taught me to see both sides of an argument.

As a female lawyer in the 70s and 80s, the problems were much the same as faced any woman in business - the struggle to be taken seriously, for it not to be assumed that you would leave as soon as you married/had a family/moved because of your husband’s job. In Scotland, women were expected to practise only in family law or conveyancing, and there was only one woman advocate at the Scottish bar. The attitude to women barristers in England was summed up by the judge who sponsored my Call to the English bar: “The problem with women at the Bar is that their voices don’t carry far enough and their emotions carry too far”.

Fortunately, things have improved since then. In 1968, fewer that 10% of those graduating in law at Glasgow were women; now it’s 60%. Women are now appointed partners in even the biggest and most prestigious firms, and there are many more women advocates, barristers and judges.

In the next 100 years, I would like to think there would be no question as to whether men support women in the legal profession.

I am proud to be a woman in law because it is an honourable profession, which should protect all and be open to all”.

Dr Morag Macdonald Simpson - General Council Assessor on Court University of Glasgow General Council Graduated LLB (hons) from Glasgow University in 1968 and called to the Bar of England and Wales by Inner Temple in 1974. Employed by the Post Office, working in BT, Central Headquarters Secretariat, and Girobank. Company Secretary of the Post Office and member of executive management board, 1985-94. Resigned in 1994 to return to university to read philosophy at Kings College London, came back to Scotland in 1997 and undertook a PhD in mediaeval philosophy at Glasgow University, graduating in 2002. Non- executive board member, The Industry and Parliament Trust 1986-94 Council member, St George's Hospital Medical School and member of finance and disciplinary committees, 1993 - 97. Chairman, the Adamson Trust until 2011 Trustee and Chairman, Glasgow City Heritage Trust 2006 - 2014 Chairman, Scottish Consortium for Learning Disability 2013 – 2018. Appointed CBE 1993.