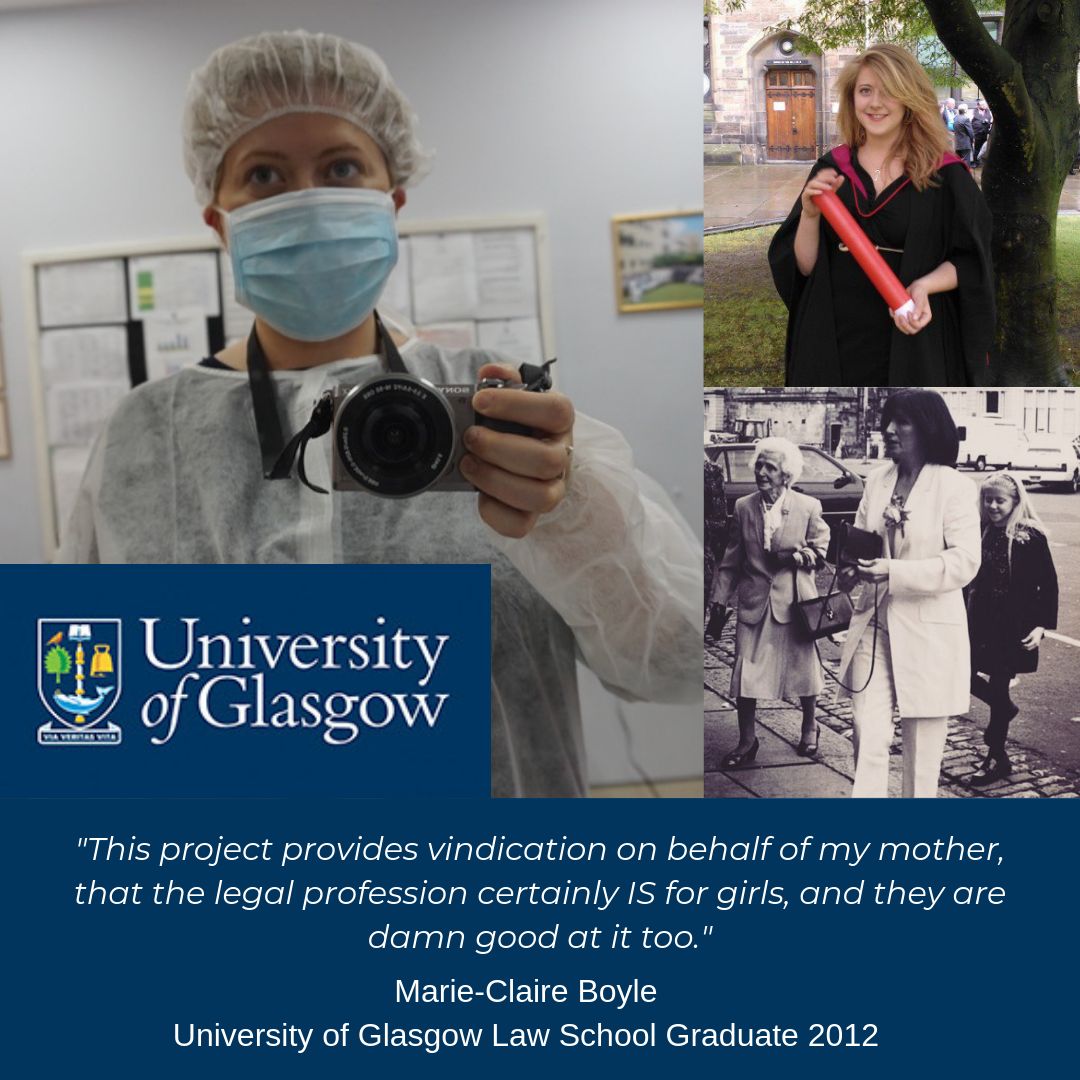 I started my legal education on the back of the most tumultuous year of my life – having lost two strong female figures in my mother and live-in grandmother over the course of my final year at high school. The former was incredibly keen for me to study law, a degree which was denied to her by her father as being a career that was ‘not suitable for girls’.

I was proud, if a little overwhelmed, therefore when I joined the University of Glasgow School of Law’s matriculating class of 2008. I was motivated in the memory of my mother and in my ambition to have a career that would make a difference to the world, though if I’m honest I was never particularly sure that the legal route was the way in which I would do this. In December 2008, tragedy struck again, when I lost my best friend only a few months into my course.

Motivation was a struggle in those first two years of University. I struggled with grief, a lack of stability (my father moved the family to the countryside shortly after my mother’s death, I maintained a student job in the Southside of Glasgow and studied in the West End) and a wonder if this route truly was for me. However, these were the years when I was given the first gift my legal education has given me – the friendships and support system that pulled me through. Being surrounded by such highly motivated and supportive individuals, both female and male, kept me on the right track academically and personally. These friendships have lasted in the decade since we first met during Fresher’s Week. I count myself truly lucky to have had the opportunity to create this network as we journey into our professional lives together, supporting each other along the way.

In my third year I was given the second gift my legal education has given me, with my ERASMUS year abroad in Lyon. I count this as one of the best years of my life. I finally felt in control of many aspects of my education, with my ERASMUS grant giving me the freedom to focus fully on my studies, and my French government-funded apartment only a stone’s throw from Lyon III University. I began to achieve academically where I struggled in my first two years and truly enjoyed immersing myself in a foreign legal system. I also grew in confidence personally. Having the space away from home to mature, master a second language and develop international friendships was incredibly transformative, and a year in the sun certainly helped with my motivation too. I was also proud to enter and come second place in the ERASMUS Ecorys British Film Council Video Competition, for this video, produced to celebrate the international friendships created through the programme.

The final year of my legal education was the toughest yet, but certainly the most interesting as I had recognised and pursued my interest in the international legal arena. I think that, especially in today’s world, critical thinking is one of the best gifts you can give a young mind. In the complicated legal world decisions are rarely ‘right’ or ‘wrong’. A legal education teaches you to value credible sources and to look at a conflict from several different angles before making a reasoned and nuanced argument. These skills are something you can take with you to any profession.

I have found a way to fulfil my ambition to have a positive impact on the world out-with the ‘formal’ legal sector, but I certainly use the gifts I was given through my education. I currently work in international development for an apolitical healthcare charity based in the occupied Palestinian territories (oPt), but of course, as with any organisation based there, politics always finds a way into the work. My legal degree has given me an ability to focus on objective reporting, a diplomatic mindset, and a knowledge of the international legal framework that is invaluable when working anywhere in the development sector and especially in the oPt.

I have also been invited back to the University of Glasgow School of Law, in a research and marketing capacity, to take part in this project celebrating Women in Law. It has been a remarkable eight months researching and sharing the stories of some incredibly inspirational women. For me personally, this project provides vindication on behalf of my mother, that the legal profession certainly IS for girls, and they are damn good at it too.