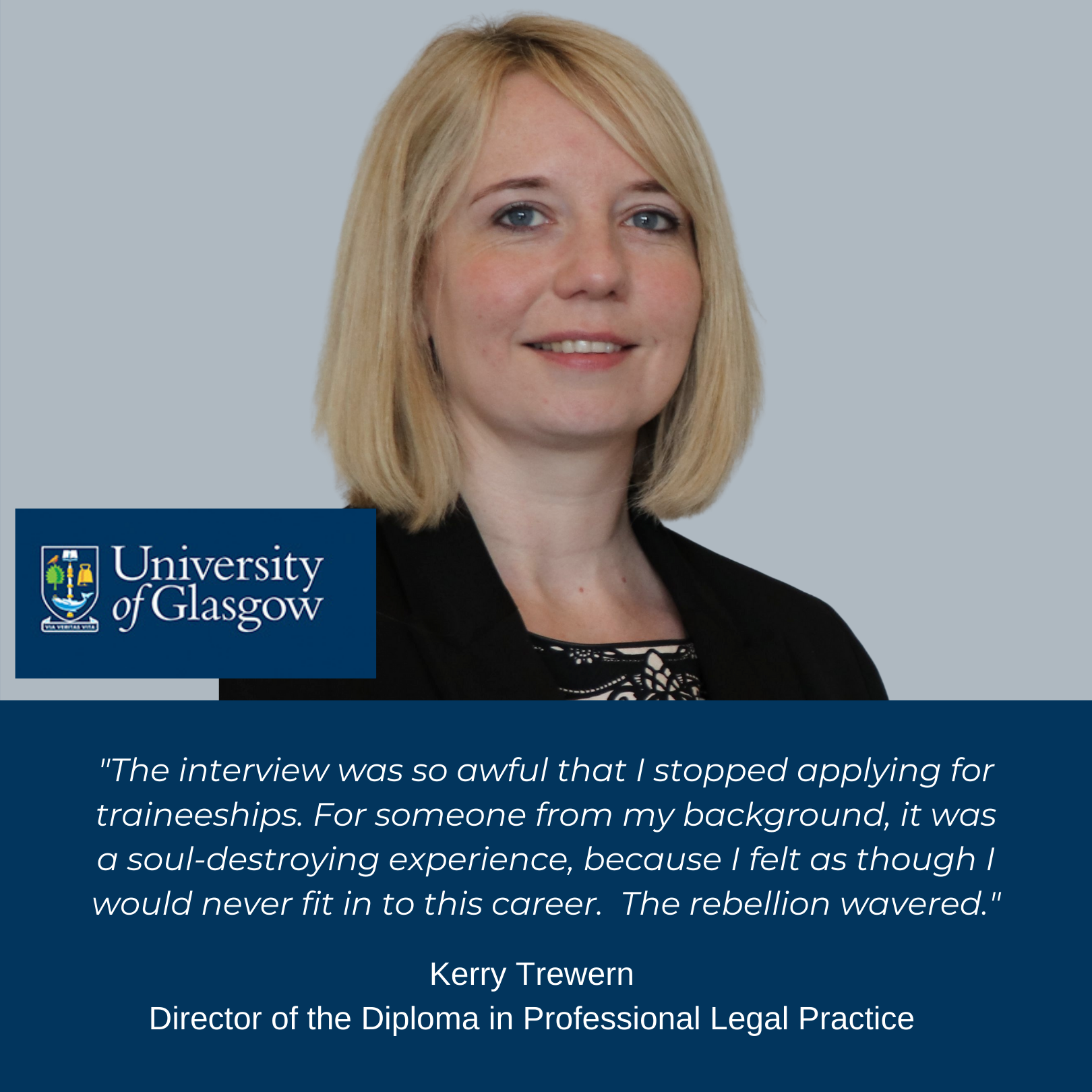 I don’t use social media.  I pretend it’s for all sorts of superior sociological reasons, but the truth is that I just don’t think my day to day life is particularly interesting.  I had the same feeling when contemplating what to write here.  What’s so special about my legal career? The truth is that I still don’t know what I want to be when I grow up.

I decided to look at the 100 Voices online exhibition for inspiration.  I read every story, each of which resonated in different ways.  Finally, I got it.  You don’t have to be a pioneer or bring about world peace to be an inspiration.  Everyone’s story is important.  All of us contribute to something bigger than us as individuals.  For women in law, the small steps taken by every single one of us form together to result in progress and change for the better.

So, my story.  I was born in the late ‘70s to bona fide hippies.  I mean camper vans, flowers, long hair, Pink Floyd and all associated trimmings.  This led to some questionable outfits for me as a baby, but also led to me growing up in a family with what were progressive values for the time.  For my parents, equality was a right.  Peace and love were the order of the day.  Conforming was losing.  Very little about my childhood was ordinary.  You might think that there was nothing I could do to rebel, as my parents had been there and got the various tie-dye T-shirts, but I achieved the ultimate rebellion.  I went to university, became a practising lawyer and wore a suit every day.

The darker side of my childhood is that I grew up in poverty (although, having seen a bit of the world, I should clarify and say poverty by modern UK standards).  I was fortunate to have intelligent, articulate, well-read parents, meaning I was accused of “talking posh” at least once a day at school, but the truth is that we were anything but posh.  When I was eight, our house was repossessed and we became homeless for the first time.  There followed moonlight flits, different schools, disadvantaged areas and my Dad’s tragic spiral into an all-consuming addiction, all of which resulted in a volatile home life and just never having enough money to live.  Fortunately, I had a strong role model in my mother, who encouraged me in my suit-wearing rebellion (by that time, she was no longer wearing long cheesecloth skirts and had moved on from the flower power days).

I left home at 18 to attend university with absolutely no idea what I wanted to do.  A couple of teachers had suggested law, but I studied arts subjects in first year, with a vague intention of being a psychologist.  Turns out I dislike psychology - no doubt for some sinister psychological reason – and so I converted to law after one year. Why?  Well, a friend of mine was studying law and it sounded interesting.  Also, I’d been told I was quite good at arguing.  Hardly a solid foundation for a career, but it was either that or stick with psychology.  The law won.

Being irritatingly analytical, studying law suited me.  (I have since been called a legal geek by colleagues, because I would occasionally commit the cardinal sin of discussing cases during Friday night drinks.)  My main issue with studying law was one that I’m sure resonates with anyone from a disadvantaged background.  At the beginning of third year, it was as though my once normal friends had all been given a secret code or learned a new language.  Law firm names were bandied about with frenzied abandon.  People had spent the summer working for free in corporate law firms.  Someone had taken a course on how to pass psychometric tests.  The traineeship obsession had begun.  I didn’t know my Shepherd from my Wedderburn or my Dundas from my Wilson (or, these days, my C from my MS).  In fact, all I knew was what I’d seen on TV.  I also wasn’t going to work anywhere for free: I couldn’t afford to do so.

I dutifully filled out a couple of application forms (hard copy – this was still the 90s) and inexplicably got an interview with a very well-known, prestigious firm.  The interview was so awful that I stopped applying for traineeships.  It was a full day involving psychometric testing, mock tasks and interviews with bored-looking partners.  For someone from my background, it was a soul-destroying experience, because I felt as though I would never fit in to this career.  The rebellion wavered.

Stepping into the Profession

Fortunately, in my fourth year, I spotted an advert for a legal assistant role at the Scottish Law Commission.  Perfect for a legal geek like me and I got the job.  That year was a turning point.  Not only did I make lifelong friends with the other legal assistants (fellow legal geeks), it exposed me to working with very senior members of the profession.  Interestingly, all Commissioners at that time were male, whereas now four of the five are female (and one was a legal assistant with me – as I keep telling Diploma students, the legal world is a small one).  This role gave me the confidence to pursue a traineeship and I obtained one with Balfour + Manson in Edinburgh.  I spent over a decade in private practice, working at both Balfour + Manson and Morton Fraser and specialising in civil litigation.  I undertook secondments to both the Scottish Government and Standard Life.  I left Morton Fraser in 2014, when I became the Deputy Director of the Diploma in Professional Legal Practice at the University of Edinburgh.  In 2016, I moved to the University of Glasgow as the Director of the Diploma.

My Experience as a Woman in Law

My experiences in the profession have generally been very positive.  I am conscious, however, that I am supposed to be talking about women in law and so I have reflected on whether anything has changed in the almost 20 years since I entered the profession.  I have encountered supportive, friendly colleagues at almost every turn.  However, I do recall some incidents that make me cringe slightly when looking back with (literal) 2020 vision.  Examples include being told that I ought to wear a skirt to certain meetings because a senior male colleague preferred women to be in skirts (I deliberately wore trousers), suggestions from fellow litigators that certain members of the Bench treated men and women differently (no comment), being asked by my (male) boss to act the “daft lassie” on a number of occasions to ty to get information or soften up witnesses (in fairness to him, it usually worked) and discovering at one time that I was being paid significantly less than a male colleague for the same job, even though I had the same level of experience and was consistently awarded the top appraisal grades.

Is any of this surprising?  No.  Traumatising?  Absolutely not.  It was an accepted way of life, which is gradually changing for the better.  My story pales compared to others, particularly those women who came before.  I feel as though I practised at a time when the profession was on the cusp of change and am pleased to note that change seems to be progressing at a faster rate now than ever before.

These days, much of my role focuses on preparing Diploma students for practice.  I find it heartening to know that these students are entering a profession which is far more diverse than it was 20 years ago when I was in their shoes (let alone 100 years ago).  It is probably clear from my story that I initially felt more defined by my socio-economic background, rather than my gender.   I do believe that things are also improving in that respect: universities are dedicated to supporting people from more disadvantaged backgrounds and employers are alert to skills that come from non-legal jobs.

Regarding women in law, it is clear that we have not yet achieved equality within the legal profession, and others far more qualified than me discuss this in their submissions for this project.  All I will say is that I hope that we continue to move in the right direction: straight through the glass ceiling.