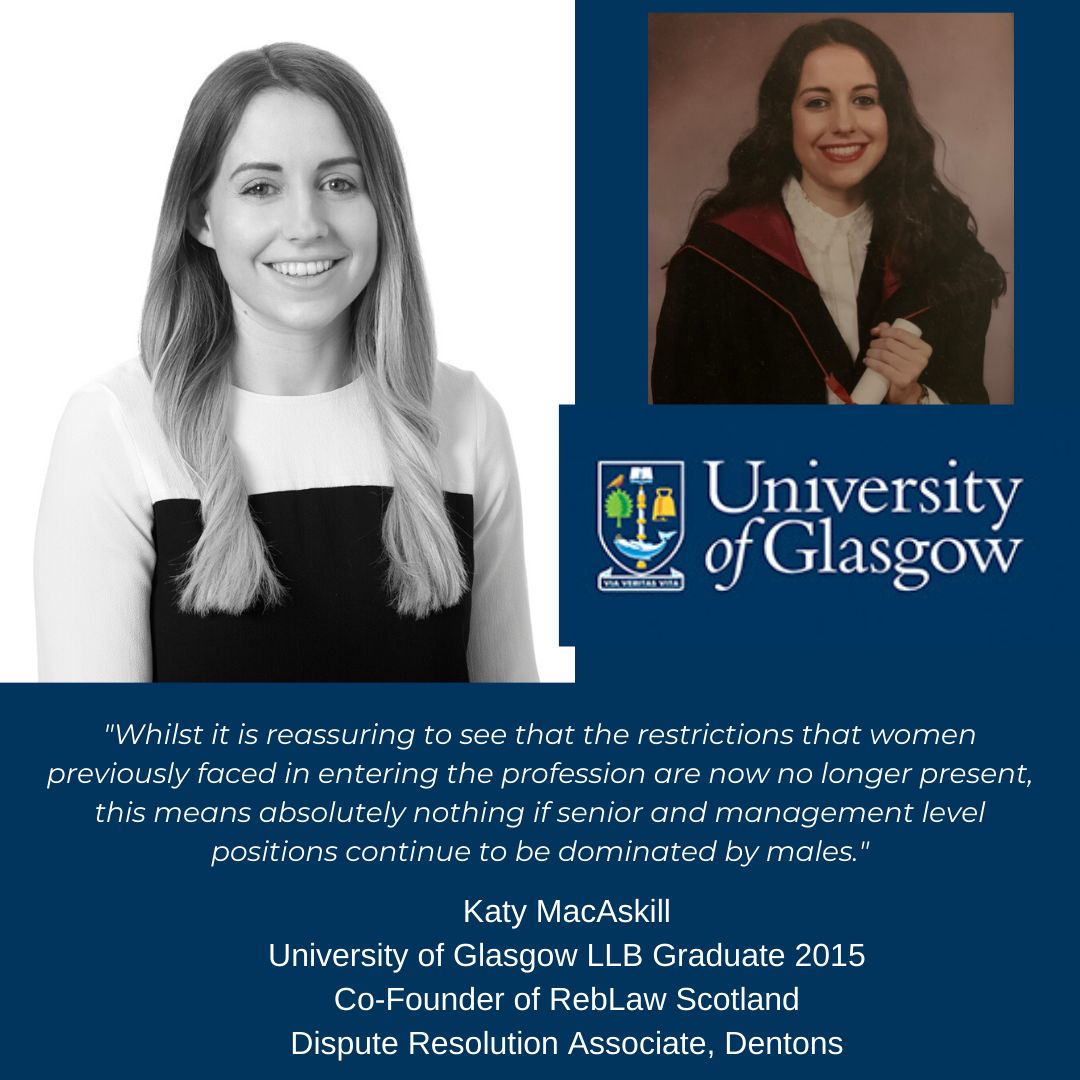 Let me start by saying that I was due to submit this piece in October 2019. However, anytime Seonaid Stevenson-McCabe (Research Assistant on the 100 Voices for 100 Years project) asked me how I was getting on, I told her I would get it to her next month. And then the month after that. Just to put this in context it is currently the final week of January 2020.

The reason that I kept delaying with a view to eventually hoping Seonaid would forget (spoiler alert – Seonaid Stevenson-McCabe doesn't forget things) is because I kept thinking really - who would want to listen to me? What do I have to say that is worth listening to that hasn’t been said before?

And then it hit me. What a typically female thing to think. Would any of my male counterparts have those thoughts? I'm going to say no.

I am 26 and have been qualified as a solicitor for just under 18 months. I graduated from the University of Glasgow with a First Class LLB in 2015. In 2016 I commenced my two year traineeship with Maclay Murray & Spens LLP. In 2017 MMS merged with Dentons which is where I now work as an Associate in Dispute Resolution. A job which I love.

I began my studies in 2011 after deferring my admission for a year and when I look back at my personal statement from my UCAS application, two things are immediately clear to me. The first is that the Admissions Staff must get some laugh from personal statements. The second is that my 16 year old self had a very narrow (but probably quite common) view of what the scope of the Law is and what it can do. This misunderstanding was rectified, and my eyes suitably widened, by my five years spent studying towards my LLB and my Diploma at Glasgow as well as my time spent during third year at the University of Oslo on the Erasmus programme.

I always said that I didn't want to practice as a solicitor. I thought of Law as a degree wide enough to stand me in good stead to pursue a wide variety of careers. While this is true, my LLB from Glasgow stood me in equally good stead to begin my career as a solicitor.  Soon after beginning a trainee seat in litigation, I knew that that was where I wanted to pursue a career. I qualified into our litigation team in September 2018.

There were many highlights during my time at Glasgow with some outstanding female role models. I was lucky enough to be taught by and spend time with Professor Rosa Greaves in both Glasgow and Oslo which I view as a great privilege.

The number one highlight though, comes in the form of my friendship with Seonaid Stevenson-McCabe and Mairi McAllan, both fellow Glasgow graduates who are my kindred spirits, my sisters-in-law and who both never fail to amaze me with their ambition and tenacity. We were in the same Diploma year but were brought together by virtue of all being future trainees of MMS – coincidentally, the firm at which Madge Easton Anderson trained. Shortly after we began our traineeships together we co-founded RebLaw Scotland (with the huge support of our alma mater), a movement that seeks to use law as tool in promoting social justice.

The team who supported us in setting up RebLaw at the University was all female – Maria Fletcher and Jane Mair were instrumental in setting up RebLaw and we could not have done it without them. It was when founding RebLaw, two years after originally graduating, that my eyes were fully opened to what a career in law could be. It can be more than one thing. I think it can be easy to forget that a career is actually a very long journey. It is not just the next year or the next five years. It is all the time after that. I feel so lucky to have that perspective. I have the options I have because of the women who came before me and the women who are around me. I have the luxury of looking forward to a long career where others faced the uncertainty of not being permitted to the Roll of Solicitors despite being just as qualified as their male counterparts.

Truthfully, I don’t have a huge amount of experience as the only woman in the room which is a positive thing to acknowledge. This year we have seen headline after headline about how there are now more female solicitors than there are male. Certainly, in the trainee year below mine, there was one male. Whilst it is reassuring to see that the restrictions that women previously faced in entering the profession are now no longer present, this means absolutely nothing if senior and management level positions continue to be dominated by males. For meaningful progress to be made in gender equality and the legal workplace, that needs to change. There is a lot of work to be done in Scotland in that respect.

Maybe one small way to help that change come about is to know that what you have to say is worth listening to and to recognise that even if it's been said before – you should keep saying it until someone listens.