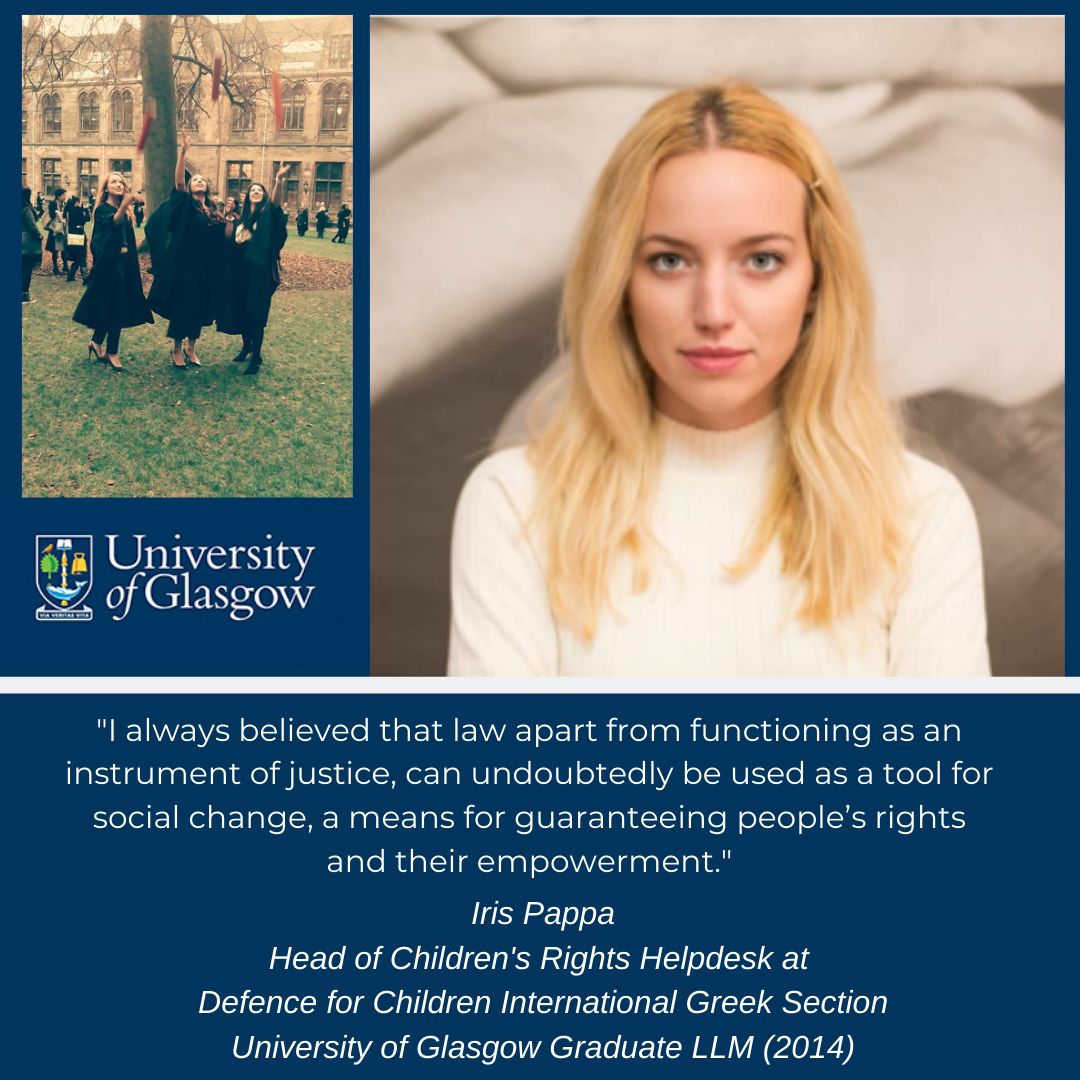 I always believed that law apart from functioning as an instrument of justice, can undoubtedly be used as a tool for social change, a means for guaranteeing people’s rights and their empowerment.

My working experiences in the third sector, the field of human rights and international development, helped me clarify my genuine interest and passion, applying myself within a field of inherently human – centric nature. Fighting for the advancement of Human Rights, especially at a period when Greece was faced with an increase of refugee flows, gave me an incentive to apply for the L.LM in International Law and Security. Unfortunately, as history blatantly perpetuates its worst tendencies, economic struggles are used as a veil to resuscitate populism, caress racism and nurture xenophobia. This Master’s program that focuses on the role of International Law in the changing worldwide security environment helped me achieve a deep and vital knowledge in International and UN law, exercising critical thinking in contemporary global and regional security issues such as human rights violations, migration and terrorism.

Being a student in the University of Glasgow, was one of the most valuable and pleasing opportunities I was given, since my time there offered me the chance to step outside of my comfort zone and to immerse myself in a totally different educational system, inevitably a new way of life. Studying law under exceptional staff professors and with colleagues from all around the world allowed me to restructure my point of view by taking into consideration simultaneously a plethora of different opinions. Most importantly, my studies there challenged the perception of my limits, at the same time resulting in an end product which gave me confidence and a sound foundation for my thereafter working life.

I always believed that law apart from functioning as an instrument of justice, can undoubtedly be used as a tool for social change, a mean for guaranteeing people’s rights and their empowerment.

Implementing law as a herald of change has been my first priority whilst working at the International Organization ‘Defence for Children International Greece’ as the Coordinator of the Children’s Rights Helpdesk, an opportunity which I am thankful for. Greece still remains a gateway into Europe for thousands of refugees. At the moment there are more than 5000 unaccompanied children. Some of them are trapped in the hotspots, inside the Camps or in police stations, while others are homeless, sleeping rough on the streets, constantly at risk of becoming victims, only steps away from being exploited. The outrageous living conditions which they face daily can only deepen their traumas and lead them to serious emotional, psychological and social disorders. Suicide attempts come as a byproduct of inhumane circumstances, lack of basic human needs, lack of empathy.

In our work, law acts as the first step for guaranteeing children’s rights, probably the most powerful one in reclaiming their lost childhood. Children on the move have long suffered in relative obscurity and making them visible constitutes undoubtedly the precondition to fully enjoy their rights. Children see gradually their legal status resolved, they find shelter, they get released from detention, they start feeling safe again. They are able to access education or/and be reunited with their families in other EU countries. They become empowered through having substantial information about their rights, which step by step helps them integrate smoothly into society, a process that can and should alleviate some of their pain. We humans are social beings and we cannot blossom without coexisting and cooperating as this is inherent with our evolution and our survival Aristotle would point out.

Throughout my career in the field, I had the opportunity to cooperate with strong and beautifully intelligent women who constitute a reference point for me and a source of inspiration. However, working in this particular field does not guarantee that you will be always treated with respect. Being a woman in law can be, not seldomly a difficult task, especially when at a young age. There were times in my career where I felt disparaged and disrespected by colleagues, and to my surprise by women colleagues as well. Even in 2019, there is still plenty of evidence which shows that unfortunately women do not always support each other. We tend to focus only on how we are treated by men, while at the same time women do not treat each other as equals. How can we achieve gender equality, the moment we sabotage one another? It is time to unconditionally support each other by eliminating behaviors that probably are deeply implanted to us on a subconscious level.

Being part of this Project as a particle among such amazing, strong and undoubtedly intelligent female personalities constitutes a great honor. Being able to feel and further the progress that has been made during all this years, to reflect on their successes but also on their challenges while hoping and believing in a brighter future truly warms the heart.

Always with the belief, the hope and the prayer that in the next ‘100 voices for 100 years’, women wont have to share and talk about their concerns and their wins, their trials and their achievements, their mistakes and their rebirths all while under the same old shackle of sex discrimination, which still with its last breath won’t let us go. Time has and will always be not only a reminder of historical perpetuity but even more so a testimony of all those certainties that came and passed.