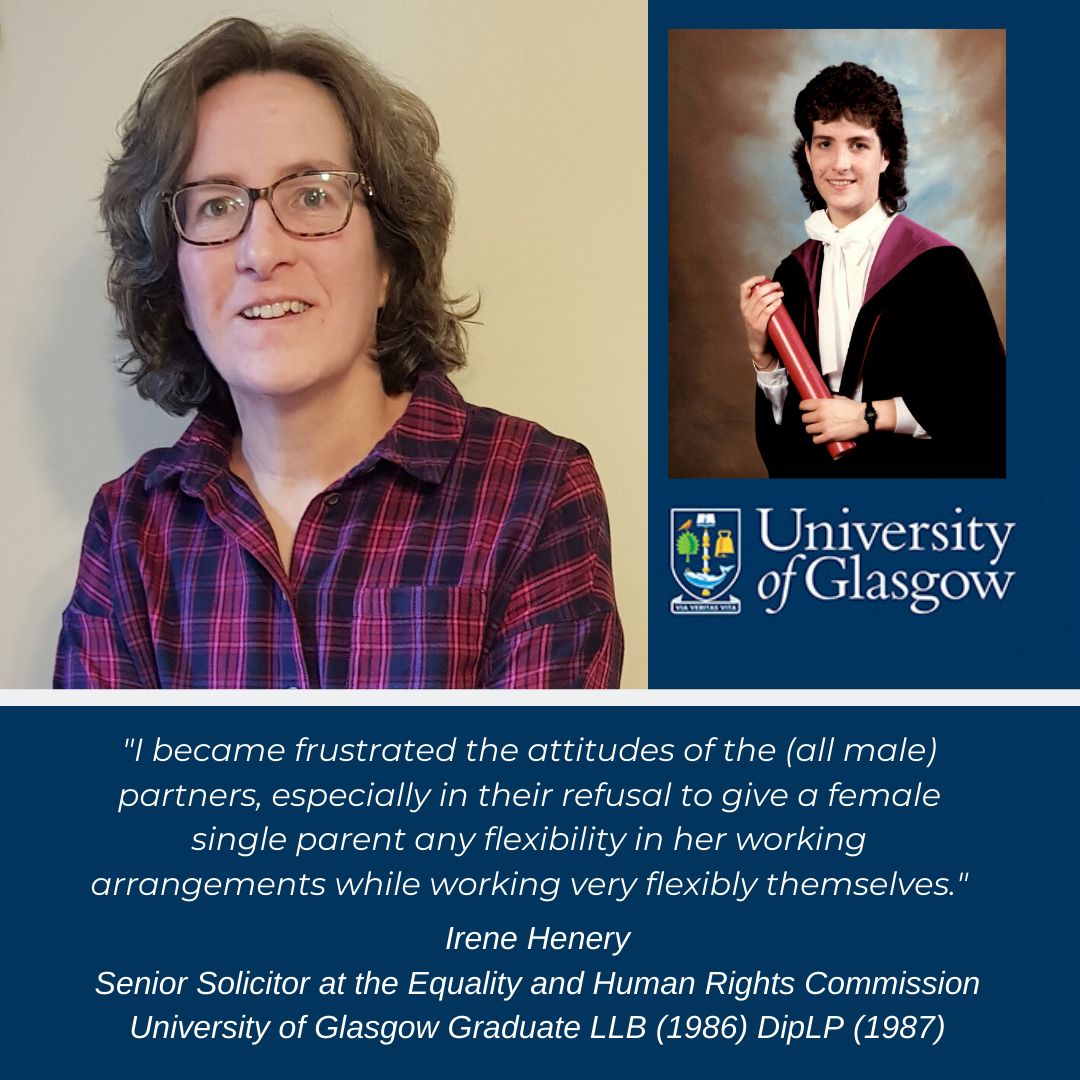 I started Glasgow University in 1982. I did an Honours degree in Forensic Medicine, led by Professor Sheila McLean which was a relatively new course and a popular choice. I thought it would be like the Ordinary Forensic Medicine course which had gripped us with forensic science techniques and details of famous cases way before the days of CSI. It was though a lot more jurisprudential, more like the current course on Contemporary Issues in Healthcare Law. Following graduation in 1987 I did the Diploma in Legal Practice.

At the time I was at the University, the numbers of women studying law had been increasing. I remember being told our year was the first year where there were an equal number of men and women studying law. The number of solicitors was increasing too and there was a limit on the number of places on the Diploma in Legal Practice, which had only been introduced a few years beforehand [which was the first year this had been capped, I think]. We were warned there would be competition for traineeship places and encouraged to consider using our law degree to go on to other careers.

We had quite a lot of female lecturers including Elspeth Attwooll, Sheila McLean, Esin Orucu, Noreen Burrows, Jessica Burns and Olivia Robinson but I didn’t think anything of that at the time; I guess I took that for granted.

I did law because I wanted to be a solicitor. I didn’t really consider any other careers. In hindsight, my image then of being a solicitor was a fairly narrow and probably fairly stereotyped one. My idea was of working in an office in private practice. I wasn’t aware of the different types of roles solicitors can have, for example working in-house, and there is a wider range of opportunities now than there was then. As it turned out, I went on to work in the private sector, the third sector and then the public sector.

I wasn’t one of those students who had a traineeship lined up. I volunteered at the Citizen’s Advice Bureau in Easterhouse for 6 months. I didn’t really see myself working for a big law firm, so I wrote to several smaller ones to see if they had any traineeship places. I got a job in a small practice with a branch in Drumchapel where I did mainly criminal work and I got a lot of experience.

I then worked in a medium sized firm, doing debt recovery and mortgage repossession but also family law work, which I found a lot more rewarding. Increasingly though I became frustrated with private practice, particularly the feeling that legally aided clients were getting a second class service compared to private fee paying clients; and the attitude of the (all male) partners towards staff, for example in the way work was allocated to staff or the refusal to give a female single parent any flexibility in her working arrangements while working very flexibly themselves.

Until then, I hadn’t really been aware of law centres, but when I found out they existed I knew that’s where I would rather be working. I worked in law centres for ten years, first for Legal Services Agency, where I went on to work in the Mental Health Legal Representation Project and then Paisley Law Centre. Law Centres provide legal services in areas of unmet legal need. This is in areas of social welfare law, for people who would otherwise be unable to afford or have access to specialist legal advice or representation It is important to me that they provide legal help which is free at the point of delivery. Law Centres also work to develop new legal remedies and services – at LSA we provided representation to people facing detention in psychiatric hospital at a time when this was not widely available; we represented some of the first victims of abuse to successfully claim criminal injuries compensation and in Paisley, we were involved in setting up one of the first in-court eviction support services.

The Commission is Great Britain’s national equality body and a National Human Rights Institution. My job is working to challenge discrimination, promote equality of opportunity and protect human rights.  So, promoting equality for women is part of my job, but also working to tackle discrimination in relation to age, disability, gender reassignment, marriage and civil partnership, pregnancy and maternity, race, religion or belief, and sexual orientation.

One of the reasons I moved to the Commission was to specialise in an area of law I felt is important. But of course, discrimination and breaches of human rights happen across many different sectors so I’ve been involved in cases challenging discrimination in areas such as education, planning, services, immigration, housing and transport. Because the Commission’s interest is in cases which have a wider strategic impact, test cases, I don’t have many cases compared to the volume I had in other jobs, but they are important ones.

I also do enforcement work; Parliamentary work which has included giving evidence to Parliamentary committee; and providing training and working to support advisers to give effective advice and representation.

A lot of my work is providing legal advice to colleagues, often cross-checking GB work from a Scotland perspective, which has recently included working on the Commission’s Inquiry into Racial Harassment in Universities and the Commission Guidance on Freedom of Expression for Providers of Higher Education and Students Unions.

Thinking about my experience of being a woman working in law, I feel I have particularly benefited from working in law centres and in the public sector: compared to the experience of other female solicitors I know who were working in private practice, I have certainly benefitted from flexible working arrangements; and it has allowed me to do work that is worthwhile, that helps people and that I feel makes a difference.