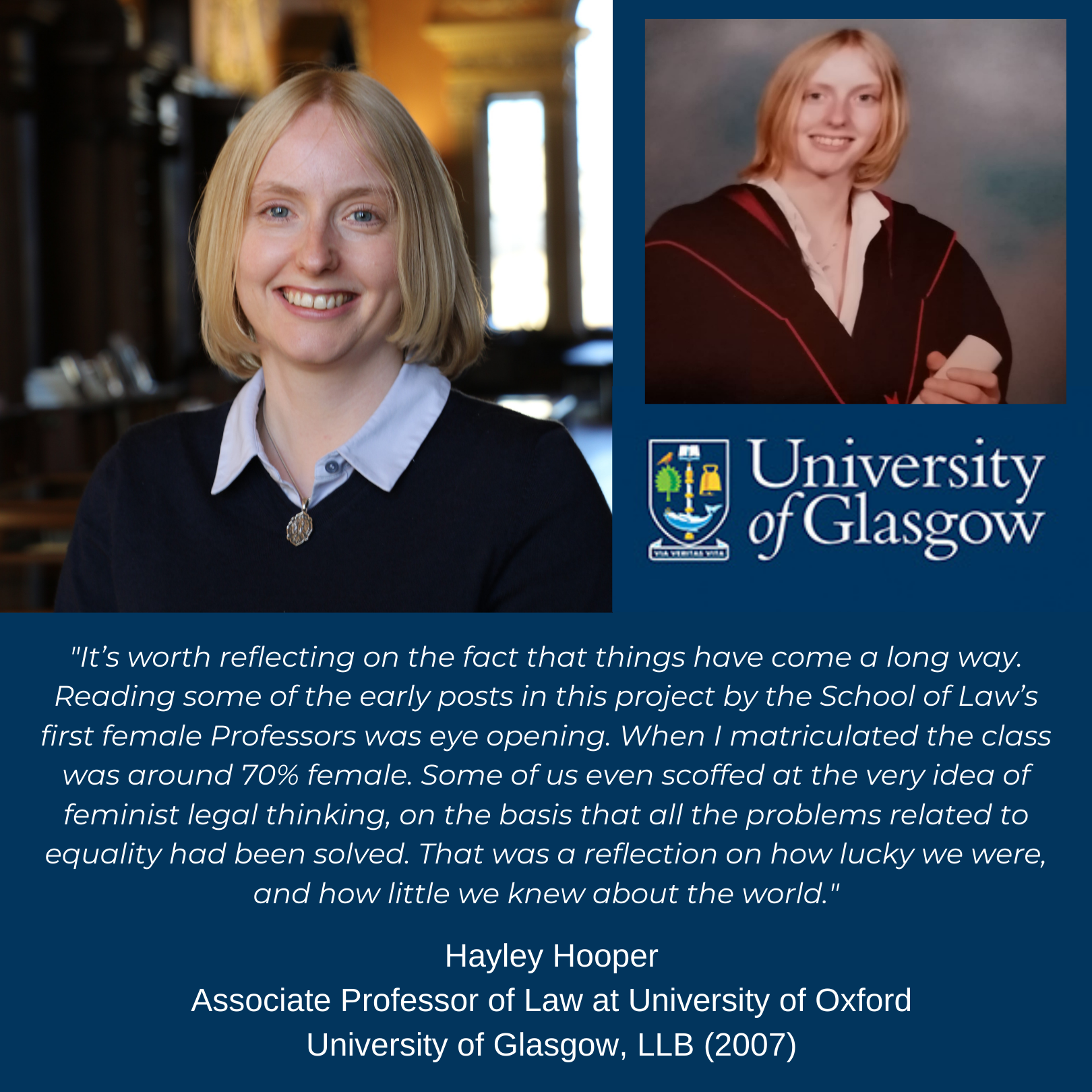 I grew up in Erskine, Renfrewshire on a council estate and attended the local state comprehensive school. I arrived at the School of Law in October 2002 as a first-generation university student, back when the terms were still named “Martinmas”, “Candlemas”, and “Whitsun”. It seems like both yesterday and a lifetime ago. I graduated in 2007 (delayed a year by illness) and went off to do postgraduate studies at Balliol College, University of Oxford. After a stint as a Foreign Law Clerk at the Supreme Court of Israel I spent three years in Cambridge as a Junior Research Fellow. In October 2017 I returned to Oxford and was appointed an Associate Professor in October 2019. My area of specialism is public law.

Unholy stress levels and a tolerance for pain. On a more serious note, I think it’s worth admitting that my first year was tumultuous, and I wasn’t a very good student. Clearly, I had all the potential but absolutely no knowledge of how to capitalise on that. Like many students I was trying to work part-time (as my parents expected) alongside my studies, and nothing was getting my full attention.

Unlike other academic communities I’ve worked in, the School of Law was very much “hands off” in terms of student support, so success was very much a Darwinian journey. I didn’t really find my feet until I discovered Administrative Law (then called Law and Government) and Jurisprudence in second year. Those seemed to be subjects that placed emphasis on ideas and conceptual thinking, in a way that previous subjects really didn’t. I still can’t tell you anything about the Land Register, put it that way…

What Glasgow really did give me, though, was a broadening of my horizons and life-long intellectual curiosity. Thanks to the vision of John Brown the School of Law had the best ERASMUS programme in the whole country. I was able to study in Lund, Sweden in my junior honours year and have a whole variety of experiences that enriched my life.

When I returned for fourth year, that’s when the degree really took off. Honours classes were what I’d been looking for all along, and I really enjoyed writing a dissertation. It was, however, extraordinarily hard work. So, if you’re in fourth year now I assure you: it is hard. Keep on going, trust yourself and the process. There are days when it will really suck, but it will be worth it.

Finally, studying at the School of Law gave me lifelong friendships and that’s hugely important.

It’s worth reflecting on the fact that things have come a long way. Reading some of the early posts in this project by the School of Law’s first female Professors was eye opening (to say the very least). I never really was aware of gender-related difficulties in my early education or my undergraduate degree. When I matriculated the class was around 70% female. Some of us even scoffed at the very idea of feminist legal thinking, on the basis that all the problems related to equality had been solved. That was a reflection on how lucky we were, and how little we knew about the world.

In terms of my own career, I have been pretty lucky. Most male colleagues are warm, supportive, and committed to excellence regardless of sex or gender. I appreciate, however, on this point that academia (or my experience within it) is not necessarily reflective of the wider legal profession. You still here horror stories, even to date. Occasionally men still do talk over women, and a lot of the labour around academia falls to women (i.e. equality and diversity work).

Lots of things have changed about the university experience since I matriculated 18 (gasp!) years ago. Students seem more aware of the world around them, universities take diversity and mental health more seriously, and there’s more funding for postgraduate study. I do think, however, that we’ve lost some aspects of reasoned dialogue. I came of age in an era of free-speech libertarianism (which, believe me, wasn’t perfect), whereas today’s undergraduates are dealing with ‘no platforming’ and ‘cancel culture’. Those are different struggles, and I am not sure they necessarily entail progress. I’m also incredibly glad that social media wasn’t around to capture my bad haircuts, awful fashion sense, and less than dignified nights out on a server in California for eternity, either…

What progress would you like to see in the next 100 years for women in law?

I’d like to see the benefits of a more compassionate and less divided world, and I’d want those benefits for both men and women. Representation in the judiciary is progressing, but we obviously need more.

I’m not sure this is the right question, to be honest. At least, it’s incomplete. Sure, we all have days where we want to call out ‘mansplaining’ and the like, but I think putting an end to sexism is really about dialogue. So much of feminism conceptualises men as the bearers of exclusive fault, and that’s not really helpful. Or the arguments are built around the concept of men doing abhorrent things like posting ‘revenge porn’ from a basement somewhere. Yes it goes on, but it’s a blunt heuristic. In reality, I think gender roles are getting less and less divided and this leads to demands on both men and women to be good at everything (especially in the context of parenting). This is particularly true of educated and successful people, like graduates of the School of Law. That’s no bad thing, of course, and it’s progress I fully support. But we need to give men a fair-hearing and understand how they struggle, too, if we really want long-term sustainable progress in the legal profession, academia, and life in general. I’m not anti-feminist, but in order to achieve political, social, and economic equality of the sexes we need to think about everyone involved.