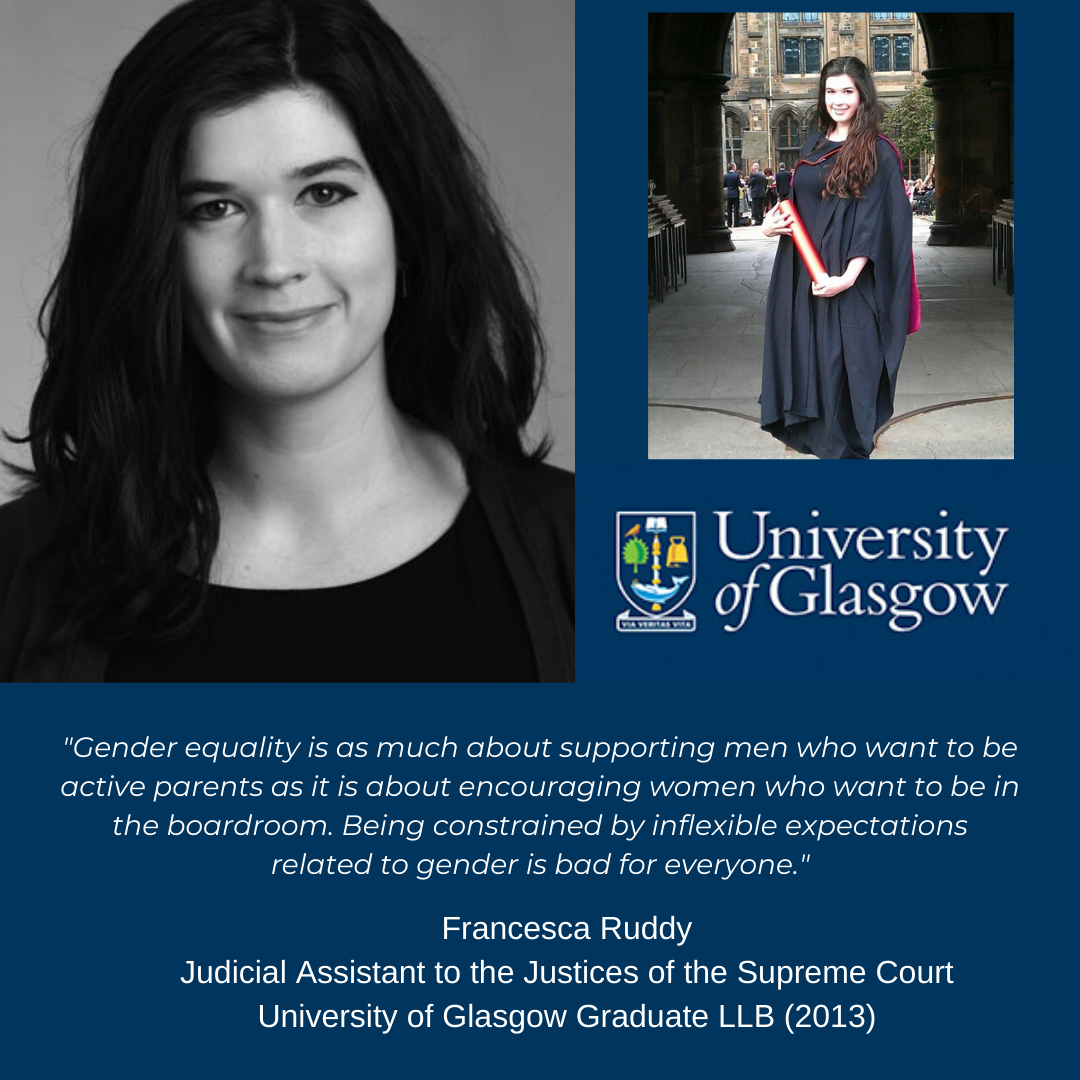 It has been more than a decade since I walked into my first Law lecture at the Boyd Orr building on University Avenue. I vaguely remember the lecturer (Frankie McCarthy) waving around a train ticket and talking about the incorporation of contract terms by reference. But the case names have long since left me. This might sound like a terrifying admission from a practising lawyer – I certainly hope my contemporaries from the School of Medicine can remember their first-year studies in more detail – but it hasn’t held me back. In fact, one of the most valuable lessons I learned at the School of Law was not to rest on my remembered knowledge of a subject. Our laws are complex and ever developing, such that a snapshot of the law at any given time will soon be out of date.

Ten years on, I am now working as the judicial assistant to Lord Hodge, Deputy President of the UK Supreme Court. In this role, I encounter fascinating appeals and applications relating to diverse areas of law. Every day, I find myself drawing on the skills I developed in my LLB studies at Glasgow, as I analyse and evaluate the information and arguments before me, testing my conclusions through debate.

The fact that I am a woman is thoroughly unexceptional in my current role, as it was when I studied under Rosa Greaves, Maria Fletcher, Ruth Dukes and others at Glasgow. Throughout my time at the School of Law, I was encouraged to have high aspirations for my future and to achieve my potential. In my second year, I was part of the all-women team which won the ESU-Essex Court Chambers National Mooting Competition for the first time in the University’s history. Later, at my graduation, I was awarded the Dr John MacCormick Prize for having the most distinguished academic record on the LLB.

It was only when I turned my attention to the world of work that my gender started to become an important aspect of my identity as a lawyer. In some of my earliest work experience at law firms and barristers’ chambers, I was advised that certain specialisms were “better for women” because they were more conducive to a work-life balance, as though men had no interest in balancing their work and their personal lives! The senior lawyers I encountered were invariably men and almost all were parents, yet the near-total absence of senior women was explained away as the result of motherhood. The few senior women were conspicuous and those without children or a partner were often the subject of unsought pity, as though no woman would “choose” to be childless or unmarried.

In other areas, women were invisible. For instance, at one office, the sole women’s toilet was perennially out of order and no one in the all-male leadership team had thought to provide a sanitary bin in any of the other toilets. At another, I was placed with a team so homogeneous that all conversation and work social events revolved around men’s football and the competitive consumption of alcohol, without regard for how this might exclude non-drinkers, less heavy drinkers and those not steeped in Premiership history.

In the end, I embarked on a career in private practice at Herbert Smith Freehills in London, where I have been fortunate to be mentored by some incredibly talented and inspiring women. Over the years, my firm has taken a number of steps to improve the recruitment and retention of women and to make sure our experiences there are positive.

However, there is only so much that can be achieved through top-down measures. Our socialisation, the media we consume, and our peer groups can leave us with strongly held, yet under-analysed views about how women and men “should” be. We can also be prone to spend a lot of time with people who experience the world in the same way as us, which can lead us to believe that our own experiences are universal. When we go to work, we bring these views and blind spots with us. So, regardless of the steps our employers and legislators may take, it is important for each of us to reflect on our individual biases and preconceptions and, as far as possible, to overcome them.

Of course, this can only happen when we understand that gender equality is in everyone’s interest. When we champion improvements in the retention and promotion of women in the legal profession it is important that we communicate clearly that gender equality is not a question of arbitrarily preferring women to men, or of taking something away from men in order to give it to women in the name of “political correctness”. Gender equality is as much about supporting men who want to be active parents as it is about encouraging women who want to be in the boardroom. Being constrained by inflexible expectations related to gender is bad for everyone.

As a profession, we still have some way to go but I am hopeful for the future.