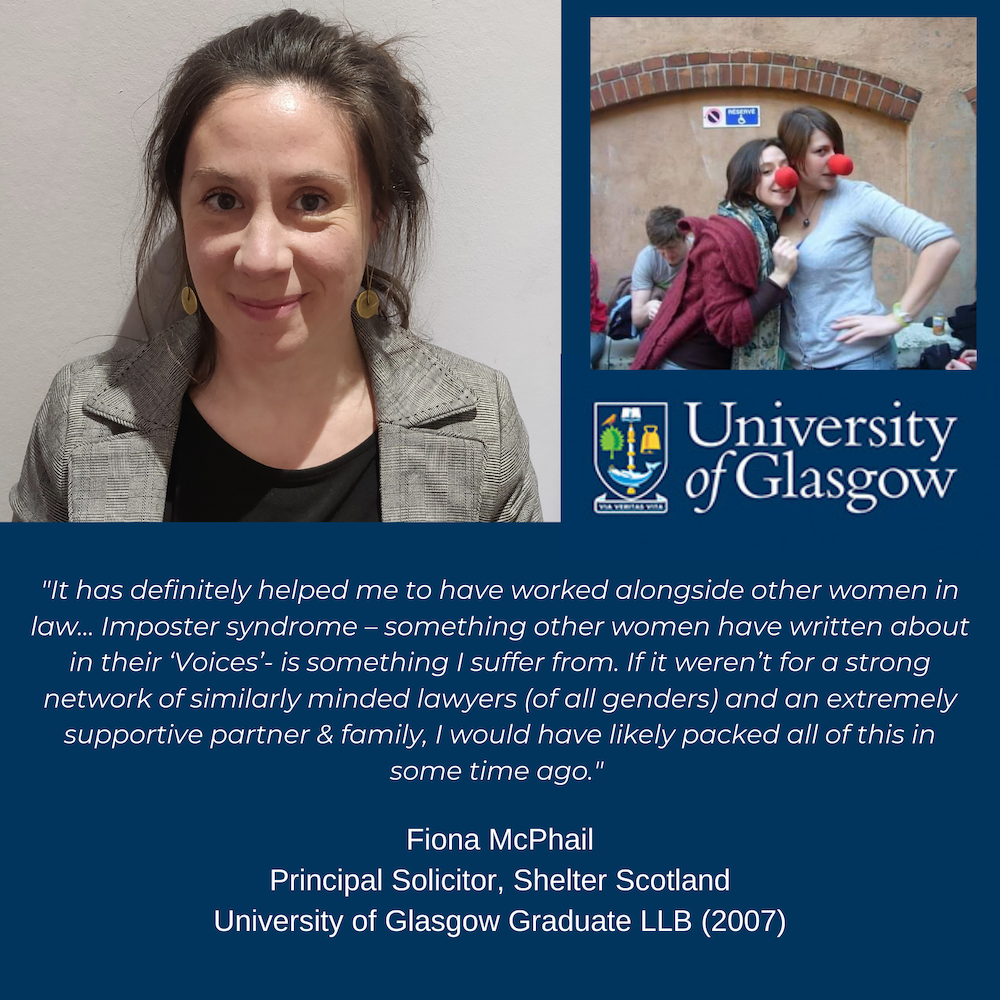 Last year, when things were oh so different, I attended an International Women’s Day event at Balfour Manson solicitors in Edinburgh. Shelter Scotland had instructed Balfour Manson Solicitors in judicial review proceedings against Glasgow City Council, in relation to the local authority’s continuing and repeated failure to secure temporary homeless accommodation for homeless people. As I listened to Elaine Motion talk about the ‘Article 50 case’ I reflected on our Glasgow case and noted the fact that both Shelter and GCC had female Senior Counsel (Morag Ross QC and Ruth Crawford QC). Our solicitor at Balfour Manson Solicitors was the amazing Sindi Mules - who not only provided an exceptionally high quality of service and expertise in public law, but was also a great source of moral support to me on one of the biggest cases I have been involved in. This isn’t about minimising the role that male lawyers play in such cases - Adrian Stalker, advocate and Chris Ryan, strategic litigation solicitor at Shelter Scotland were also invaluable members of the team, but I do think it’s important to recognise the importance of having women  role models, particularly where women are seeking to challenge the status quo.

It has definitely helped me to have worked alongside other women in law. Confidence is something that I regularly find lacking; not ideal when you set out to be a court litigator and hold the position of Principal Solicitor! Imposter syndrome – something other women have written about in their ‘Voices’- is something I suffer from. If it weren’t for a strong network of similarly minded lawyers (of all genders) and an extremely supportive partner and family, I would have likely packed all of this in some time ago.

It was an interest in human rights, in the widest sense of the term, that led to me studying law - I didn’t know any lawyers and stepped into the LLB somewhat blind. I was incredibly lucky to grow up in a safe home, with very supportive and encouraging parents when it came to my education and the life choices I made. It was made very clear to me by my parents that not all children in the world were so lucky - from a young age I had some awareness of how poverty and violence affected others. It was this sense of unfairness that lit the fire in my belly - how could two children in the same school have such different experiences; why were some of us more likely to die from hunger or war than others - and these differences existed not just across borders, but within the same cities! I chose to study law hoping that a legal education might help me do something about some of these issues.  I struggled through the first two years - questioning whether I had made the right decision. Luckily, I had met Rachel (now Dr McPherson, Lecturer in Criminal Law at the University of Glasgow) on day one of the degree and so didn’t feel completely alone or out of place.

It wasn’t until I was in my 3rd & 4th years, studying Constitutional Law with Professor Adam Tomkins; Law & Social Theory with Dr Scott Veitch, Professor Emilios Christodoulidis and Professor Lindsay Farmer that I truly felt comfortable and at home in the study of law. I was also extremely lucky to have the opportunity through the School’s European Human Rights Project, run by Professor Jim Murdoch and Maria Fletcher, Senior Lecturer in Law, to prepare a mock application to the European Court of Human Rights in Strasbourg. Long lasting friendships were formed on that course - Siobhan Connelly, was one of them, a fantastic human rights lawyer.  I have those friends and staff to thank for giving me the confidence to pursue my interest in public law and social justice.

It’s that same interest in human rights, although seen through the lens of the law, which continues to motivate me in the work that I do today. During my undergraduate degree I had volunteered in the Women & Children’s Department, at Legal Services Agency. I continued to volunteer there during my Diploma in Legal Practice and when the opportunity of a traineeship arose, I applied. I was unsuccessful - a certain Jen Ang, was the successful candidate. I was subsequently offered a traineeship in LSA’s Housing & General Court department, where I qualified as a solicitor in 2011.

After a brief period in Mexico where I volunteered with a human rights NGO supporting the families of disappeared migrants, I returned to my hometown of Edinburgh where I joined Shelter Scotland. By then, I had developed a passion for housing law and so the opportunity to specialise in housing for Scotland’s leading housing & homelessness charity was a real privilege. Three years later the post of Principal Solicitor was advertised and on a day when my imposter syndrome wasn’t debilitating, I applied.

Some six years post qualification, Jen Ang, in her capacity as co-founder & Director of Just Right Scotland and myself as Principal Solicitor at Shelter Scotland would cross paths again, firstly in setting up StrEEt Aware - a social justice collaboration supporting homeless EEA nationals in Edinburgh and then as part of a wider coalition of organisations challenging Serco’s Lock Change Policy. Being a Principal Solicitor, with overall responsibility for a firm can be a terrifying as well as immensely satisfying experience. Jen has been an immense source of inspiration and encouragement during both the challenging and exhilarating times in this role. I am so glad she got that job at LSA all those years ago!

It’s thanks to that type of non-judgemental peer support from fellow lawyers, not all of whom are female, that I haven’t found being a woman in law too challenging. I am conscious that this is in large part due to the struggle and campaigning of women before me. There is however a gendered perspective to the work I do as a housing solicitor. All too often it’s women who find themselves homeless, trying to flee domestic violence or women facing eviction for rent arrears or anti-social behaviour who are trapped in an abusive relationship in their home. In the last ten years we have also seen significant reform of our social security system with policies such as the Benefit Cap which disproportionality affect women, and their children.

I had no prior knowledge of housing or homelessness law prior to my traineeship except for vague references to English housing law decisions in administrative and constitutional law courses on my undergraduate degree. That homeless people actually had rights to temporary accommodation (at the time, there was a need to demonstrate priority need) and that so many people and families were at risk of eviction at any one time really struck me. I recall one of my first ever cases, working in LSA’s Greenock Office, when my client – a middle aged, incredibly thin woman turned up, drenched. She had walked for almost two hours to reach her appointment as she couldn’t afford the train fare. She wore a thin suit jacket, doing her best to look her best. After she had explained to me the predicament that she was in (facing eviction for rent arrears - benefit issues; tension in the household as despite the relationship breakdown, her partner was continuing to live there as he would otherwise be homeless; hunger – porridge morning, lunch and dinner) I reassured her that we would be able to take her case on and that in my view, she had good prospects of successfully defending this case if we could sort out her benefits. She broke down crying. She was used to struggling through, surviving, not being helped.

That’s when I realised that housing was a human rights issue.

It took me a good few years to come to terms with the emotional toll of this kind of work. Men old enough to be my father crying in appointments as they disclosed to me that that their family were not aware of the looming repossession of their home; street homeless people suicidal at the thought of another night sleeping under a bridge. Professional boundaries are so very important in this kind of work, not just for the obvious reasons, but also as means of self-care. In my experience women have a tendency to care for everyone else before themselves. There’s a societal expectation that we are the primary care giver and that can be heavy burden to carry on top of other obligations. I am extremely lucky to have been surrounded by so many inspiring and courageous women who have done nothing but encourage me.