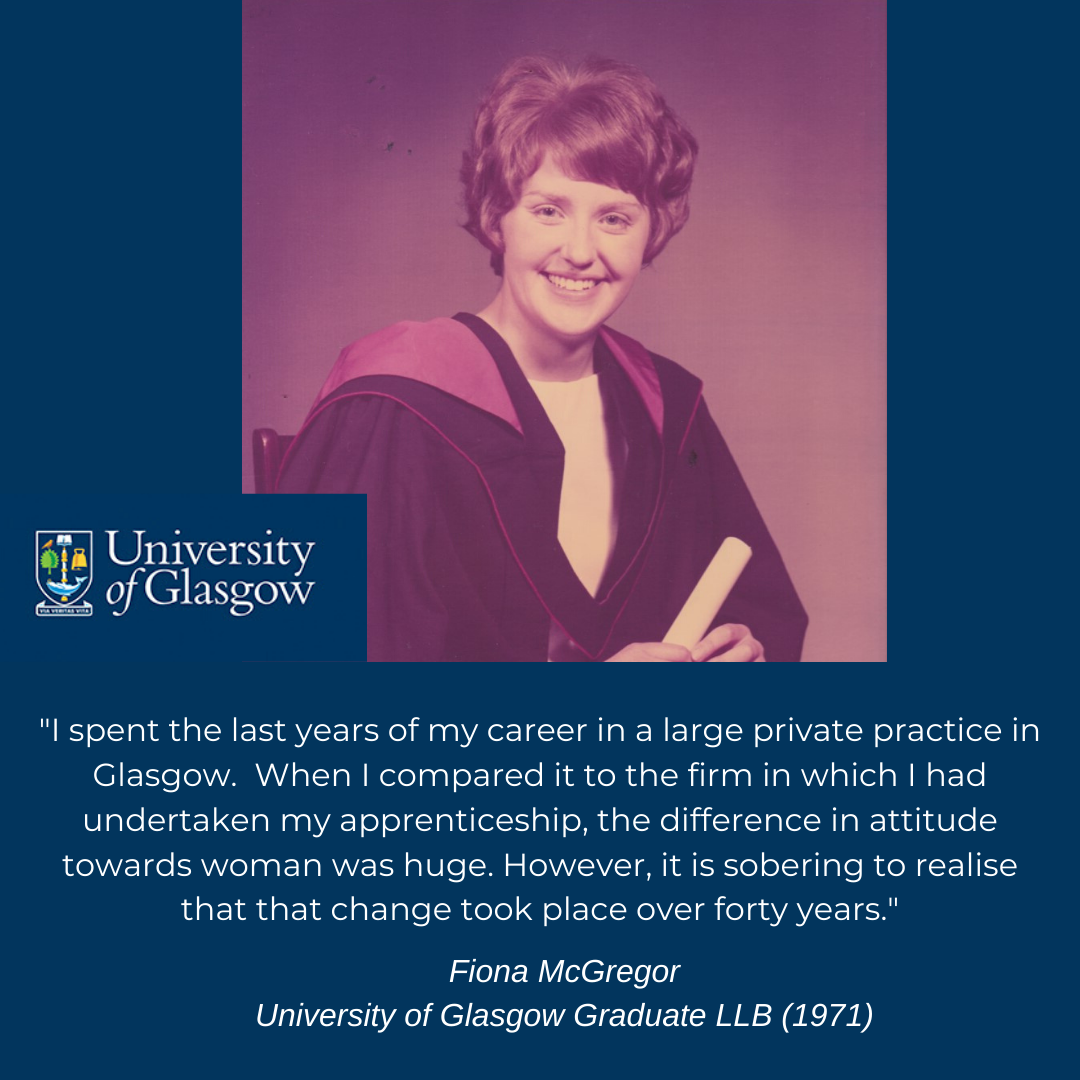 My name is Fiona McGregor. I graduated with a LL.B. degree from the University of Glasgow in 1971.

I matriculated in the Law Faculty in October, 1968. Of the intake of 120 students, only twelve were women. This was a heady time for young people, just after the Paris student riots and a year after the “summer of love”, and a sense of rebellion and optimism was in the air. They were great days to be a student.

After graduating I started my apprenticeship - as traineeships were called in those days - with a traditional, medium sized firm in Glasgow. Although the firm had a flourishing court department, I was set to work mainly on domestic conveyancing and executries. The firm took on one apprentice per year. The male apprentice, who had just started the second year of his apprenticeship when I joined the firm, often attended Glasgow Sheriff Court. Despite having asked several times, I was never taken down to court or trained in court matters. When another male apprentice later joined the firm, he was taken to court on his first day. When I pointed out the discrepancy between his treatment and mine, I was taken to court - but for one day only. It seemed that the partners thought a woman’s legal career lay in domestic conveyancing and executry work. Although I liked the people in the firm, I did not enjoy my apprenticeship.

In 1975, after a further spell in private chamber practice, I won a scholarship from the Deutscher Akademischer Austauschdienst for a year’s study of (West) German law in Germany. I learned about Germany (both West and East Germany), its law, culture, business practices and politics. I also became more fluent in speaking German. It was a very happy and interesting year for me.

After spending another couple of years in private practice, I was fortunate to be awarded another scholarship, this time to study European Community law at the international College of Europe in Bruges. Apart from wanting to spend more time abroad, I had graduated before the U.K. had become a member of the European Communities and knew there was a gap in my legal knowledge. The course was rigorous and, as most of the law courses were given in French, testing for me. However, it was a very worthwhile year for me, and I have retained a number of friends from that time.

When I applied for these scholarships I was given a lot of encouragement from, in particular, the late Professor Halliday and John Grant of Glasgow University, and their help was invaluable.

After my year’s study in Bruges, I obtained a five month internship with the Delegation of the European Communities in Washington D.C. (A delegation is an embassy without a military attaché.) My work there involved doing research and writing short papers on a variety of topics, and I had to spend a lot of time in the Library of Congress and, less time, in the C.I.A.’s offices in Maclean, Va. They were a fascinating and exhilarating five months.

On my return from Washington, having decided that I did not want to spend my working life doing domestic conveyancing, I joined a medium sized construction and engineering company in Glasgow, as their lawyer. I found I very much enjoyed working in industry and, as the company diversified into and indeed pioneered, different areas of construction work, it gave me an interesting variety of work. The senior management team of the company was all male. When I became the company secretary, I was very much aware of the resentment of some colleagues, and it initially proved a difficult situation for the management team to manage. Nevertheless, I stayed with the company for eight years as I found the work challenging and enjoyable.

Thereafter I was appointed as legal adviser and company secretary to one of the companies in the offshore division of an international conglomerate which had its headquarters in London. I was the first female employee in a senior position in that division. I very much enjoyed working there, and the all male management team were easy colleagues. However, I was surprised when, at my first year’s assessment, I was told that, although one of the directors had opposed my appointment on account of my gender, everything had worked out so well that the management was sufficiently confident to appoint a female H.R. director. Even this enlightened management team had seen itself as having taken a risk in appointing me, a woman, to a senior post.

I later moved to another company within the same conglomerate where I became one of a team of five, one other woman and three men, which was responsible for the legal and commercial aspects of the company’s contracts. The company was involved in the design and construction of power plants and had a large manufacturing division. I loved working with this company and with my colleagues of different, mainly engineering, disciplines. I was sent abroad as part of teams to negotiate contracts in China, Oman, Kenya, Sudan, India, the U.S.A., the United Arab Emirates, Japan, Dubai, Singapore and other parts of Europe.

I have many – mostly happy - memories of working abroad with my colleagues. One incident I remember clearly. A colleague and I were in the Sudan for a contract negotiation. At that time civil war was raging in the Sudan, and the Vice-President was killed in a plane crash when landing in southern Sudan. It was not known whether the crash was caused by bad weather or by an act of terrorism. Unfortunately, the day after the crash, my colleague and I, with a couple of hours in hand, went to see the confluence of the Blue Nile and the White Nile, and I took a photograph, not knowing that there was a huge army camp nearby. My colleague and I were promptly arrested, taken under armed guard to Khartoum, and detained for a few hours until after the Vice-President’s funeral had taken place. Whilst hardly a career achievement, it was a career highlight.

Not everything was ideal. When the company secretary’s position became available, I was passed over in favour of a younger, less experienced male colleague, for reasons unknown, although when he left after a short time, the position became mine. There were also other incidents of overt discrimination, but overall, given that the company worked in heavy industry and was male dominated, and given that I enjoyed the work, the advantages outweighed the disadvantages.

The company was eventually taken over by General Electric of America, at that time the world’s second largest company. Being part of such a large American company was a revelation, and it was encouraging to see a good number of women in senior positions.

I spent the last three years of my career in a large private practice in Glasgow working in its construction law department. Although the preponderance of partners was men, there were a number of women partners and women in senior positions. The atmosphere was enlightened and fair. When I compared it to the firm in which I had undertaken my apprenticeship, the difference in attitude towards woman was huge. However, it is sobering to realise that that change took place over the course of forty years.

I started at the University when I was sixteen; at that time Glasgow University was the only university in Scotland which allowed students to matriculate at that age. (It was not in the UCAS system back then.) At that time, most of the students came from around the Glasgow area. I feel that all the students were all treated equally regardless of background or gender. I never felt at any disadvantage because I went to a state school or because I was female. It was a rigorous degree course, and we had to work very hard. At times it was a slog. However, we were taught by academics, some very eminent in their field, who were kind and generous with their time towards the students. It was a benign, encouraging atmosphere, and one which instilled in me the confidence to pursue my career in which ever direction I wanted.

I do not believe equality of opportunity can be enforced in the private sector but it might be a good start if there were a thorough and wide-ranging survey of private firms to ascertain why more women are not appointed or are not in senior positions.

An obvious area for improvement would be the judiciary. According to a Council of Europe report published on 6 October 2016, only 23% of judges in Scotland were women, one of the lowest percentages in Europe. That is unacceptable. Research needs to be done to ascertain why this percentage is so low, and any problems confronted and solved.

Improvements need to be made soon. It is not acceptable for improvements to be made over the course of years and decades. I believe attitudes towards women are changing rapidly in society in general and we, women lawyers, should take advantage and press for change now. The times are right and, with the current Scottish Government in power with its positive attitudes towards equality, today might be the best opportunity we may have to effect change.