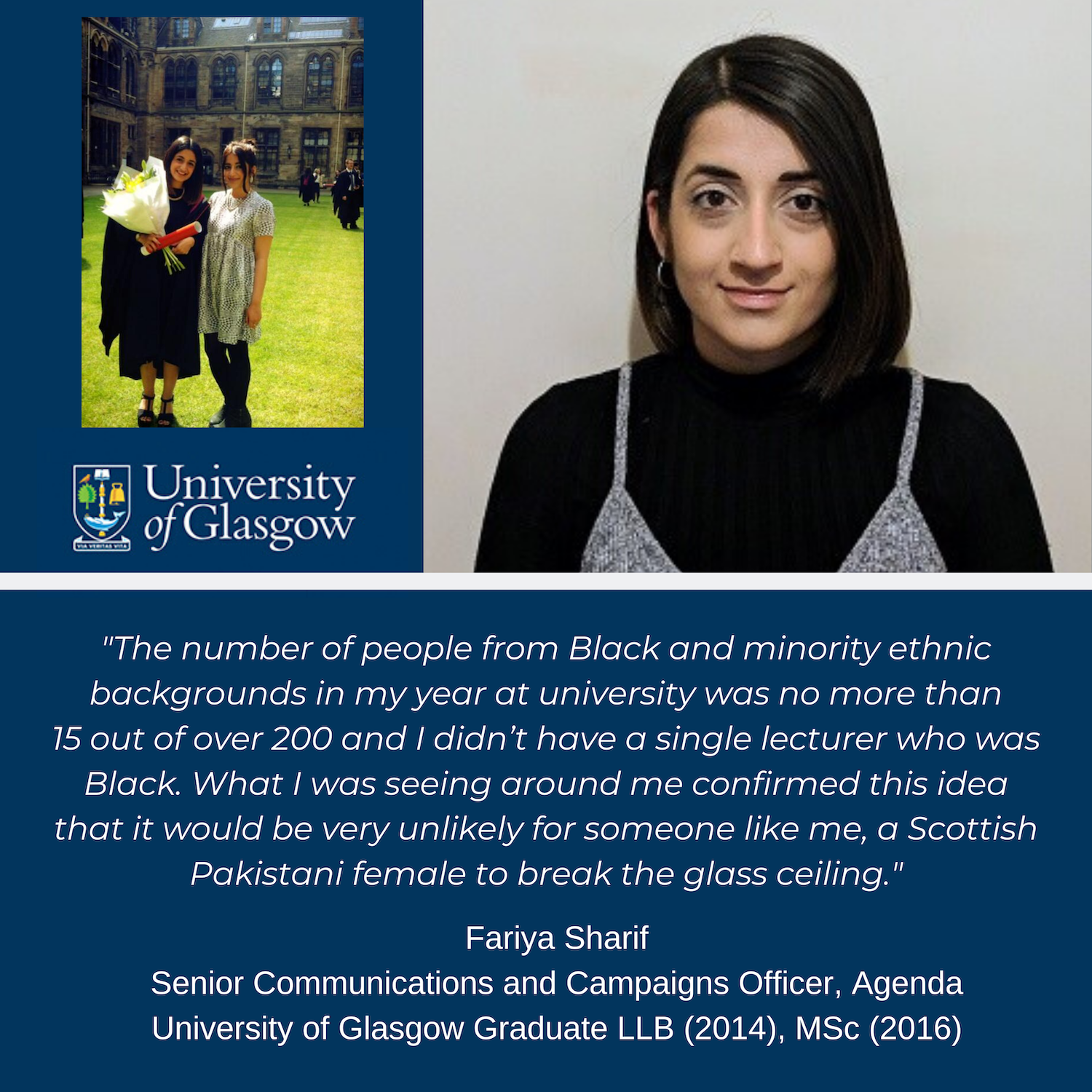 Four months ago when I had started writing this piece for the brilliant 100 voices for 100 years project, I would never have imagined how much things would have changed across the world. We have not only experienced a global pandemic but also the rise of a movement calling for the long-awaited justice for black people. These four months have been difficult, but I know they have been exponentially more difficult for so many others. I almost didn’t have the courage to write this piece about myself but if the last few months have taught me anything it’s that we need to hear the voices and stories of individuals from marginalised backgrounds more than ever before. That’s what the centenary project is all about - it’s taught me that sharing personal stories can be not only empowering for the reader but indeed also for the writer.

Growing up in Edinburgh as a Muslim in a very close-knit Pakistani community had a big influence on my decision to study law. As far back as I can remember, I was constantly debating with my family around social and political issues, particularly feminism. I remember being discontented a lot of the time, unwilling to accept the narrative of patriarchy which was laid out around me. My parents were the ones who suggested studying law to me, noticing the passion I had in defending women’s individual rights and my resistance to give in - as they put it. Once I started my degree, I was adamant that I would study hard to become a lawyer to help women and girls who faced disadvantage have a fairer chance in life.

I gained a lot from my time at Glasgow University, it also took a lot from me. I threw myself at most of my courses, they certainly required me to. Let’s just say it wasn’t always enjoyable, but I certainly wouldn’t be in the career I am today if it hadn’t been for the Law department at Glasgow. It taught me about the power of influence as a necessary component for creating change in society - exactly why I had entered the school of law in the first place. Participating in frequent debates gave me the practical tools to develop my influencing skills. This ignited my desire to hone my craft to make society a better place for those who were less privileged, particularly women.

I realised early on that it was easier to have a successful legal career if you were a man or if you were white. The number of people from Black and minority ethnic backgrounds in my year at university was no more than 15 out of over 200 and I didn’t have a single lecturer who was Black. What I was seeing around me confirmed this idea that it would be very unlikely for someone like me, a Scottish Pakistani female, to break the glass ceiling. If I felt like this, then imagine what black women, who are significantly less represented than Asian women, would feel.

The legal sector must ensure that young people from less privileged backgrounds face fewer restrictive barriers when entering the profession and are encouraged to become solicitors, barristers and judges, particularly young women of colour.

I decided not to go down the route of becoming a solicitor, partly due to the lack of response I received from the many applications I sent the summer I graduated. I also realised that becoming a solicitor was only one avenue through which I could accomplish what I wanted to do - helping to achieve social justice for women. I was the first person from my extended family to complete a university degree and I couldn’t have been prouder for doing so (my family were even prouder!). I went on to do a master’s in Human Rights and International Politics to broaden my knowledge and insight into the topics which spoke to me the most. Throughout my masters I worked part-time at Glasgow Women’s Aid supporting them with their communications and visiting many of their refuges. I witnessed first-hand the vital, yet poorly funded and under-resourced services protecting survivors of domestic violence.

Since then I have worked at the Women’s Equality Party supporting them to grow their membership and gaining an insight into how a political party works as well as at a leading humanitarian aid charity - CARE International. I’m now in what I would describe as my ideal job, campaigning for the rights of women and girls at a charity called Agenda, an alliance of over 30 member organisations. We campaign to protect women and girls at risk of homelessness, abuse, mental health, addiction and contact with the criminal justice system.

I am a campaigning enthusiast. I truly believe that with the right dedication, communication and knowledge we can collectively influence policy makers, government and decision-making bodies to protect the most vulnerable in our society. Studying law taught me the basis of what I know today and gave me the drive to embark on a career fighting for justice.