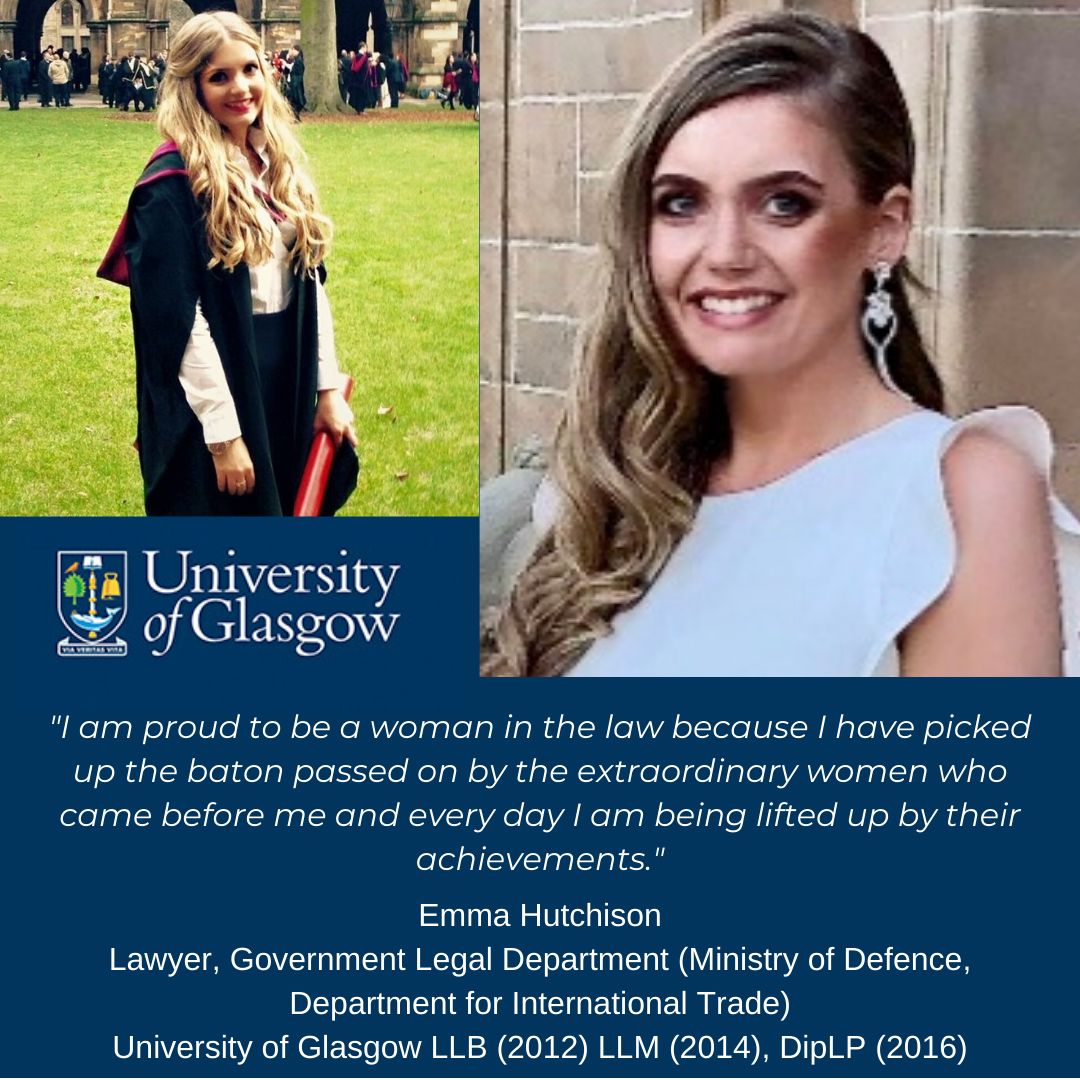 I am proud to be a woman in the law

My choice to pursue a career in law stems from being captivated at a young age by the brave and hard-working women I learned about in History classes, watched on TV shows and grew up with in my own family.  I was energised by the stories of Eleanor of Aquitaine and Queen Elizabeth I, both of whom were two of the most powerful and influential figures of their time despite living in a man’s world.  I was inspired by Anne Frank and Rosa Parks, who both took a stand against searing injustice.  I was motivated by C.J. Cregg blazing a trail in The West Wing and George Channing holding the justice system to account in Judge John Deed.  Meanwhile, my mum was running a household, raising three kids and working part-time whilst my dad worked full-time.  My gran Chrissie worked into her 70s and spurred me on with stories of her mum, my great-granny Bessie, who raised five children in a dirt-poor Glaswegian household whilst she worked multiple jobs and her husband fought in WWII or was unemployed because of his political beliefs.

My mum, my gran and my great-granny were not ambitious in the conventional career sense of the word like C.J. and George; but, like Eleanor and Elizabeth, and Anne and Rosa, they made the best of the situation they were in and tried to improve the lives of their children and grandchildren and great-grandchildren.  Luckily for me, they, along with my dad, were determined to make sure that I would be able to make the most of the opportunities that life offered me.  It was this encouragement that instilled my self-belief and propelled me towards my achievements.

My experience growing up was not always so positive:  a teacher asked why I was bothering to attend university open days in S5 when there was no way that universities would make admission offers to students below S6 (they did, to myself and two female classmates);  a date asked why I was so keen on becoming a lawyer when women were better suited to being legal secretaries (he was clearly mistaken in thinking I had the patience, organisational skills and understanding of legal business needs to be a successful legal secretary); and my papa was only ever interested in finding out whether I had a boyfriend (when I told him I didn’t, he took this as an affront to the “good looks” he felt he had passed on).  I was lucky enough to have my cast of cheerleaders who encouraged me to believe in my own talent and to always do my best no matter what.

This was my first lesson: young women need to have cheerleaders and a range of role models to reinforce their self-belief and help them overcome the negativity that they may face growing up.

When I began studying at the University of Glasgow School of Law aged 16, I was immediately struck by the number of bright, ambitious women on my course.  We outnumbered our male classmates and, in my view, consistently batted above the average.  In my third year I was fortunate to study in Australia with some of those women, and Australia is where I found my legal raison d’être in Public International Law.  My support network encouraged me to pursue an LL.M in International Law, and to wholeheartedly throw myself into job opportunities overseas.  The remarkable group of women I met during my LL.B and LL.M, and in all the places I lived abroad, emboldened me to keep striving towards my career goals.  I am still in awe of those friends, from those putting in the hours at international law firms to those pouring their hearts and souls into pro bono and legal aid work, and from those pioneering new policy in government to  others blazing a trail at energy companies.

Having spent time working in The Hague, Brussels and New York, I embarked upon my traineeship.  I had spent time working in the international legal field which had a healthy number of successful and senior women, so I was struck during my traineeship by the imbalance between the women in the middle and lower ranks of the firm, versus the men at the top.  I was in month 18 of my traineeship before I worked with a female partner, and I found the experience to be eye-opening.  She was more open and emotionally attuned than any of the male partners I had worked with, and more readily delivered praise when it was deserved.  I realised then how important it is for junior female lawyers to work with senior women with whom they can identify and aspire to.

My experience at the Government Legal Department (GLD) and within the Civil Service has been somewhat different to private practice.  The most recent diversity and inclusion statistics show that 53.9% of civil servants are women, with women making up 45% of Senior Civil Servants.  For my own part, I have encountered brilliant female lawyers in very senior positions from day one, including the heads of the Army and RAF legal services and 2* military officers.

It has become apparent that some of the senior women in GLD (and the wider Civil Service) have been able to take on their stretching roles because of the availability of flexible working, including job-share arrangements (I didn’t realise that job-shares really existed until I joined GLD!).  I have also experienced men taking shared parental leave and working part-time in order to share the responsibility for household management and raising children.  In my view, the availability of flexible working and men being willing and able to share the load is absolutely vital to achieving gender equality in the legal profession.

One area that still needs a lot of work is the difference in treatment and perception between successful and ambitious women, and successful and ambitious men.  Eleanor of Aquitaine and Queen Elizabeth I have been described by historians as manipulative and cold, implying that their political successes are attributable to these qualities.  C.J. Cregg had to tailor her style to the men surrounding her in the West Wing, often sacrificing her inherent femininity along the way, whilst George Channing’s formidable lawyering earned her the nickname the ‘Ice Maiden’.  Every day I encounter women lawyers who are struggling with how to best present themselves in work as competent and high-aspiring but without coming across as ‘power-crazed’ or ‘pushy’.  They also lack confidence in their own abilities and instead of celebrating their achievements, attribute successes to ‘luck’ or the ‘good team’ around them.  Many also focus on what they could have done better.  In my view, the sense that ambition is a dirty word and that women need to have exceptionally high standards starts in childhood when girls are admonished for being too bossy and told to be humble or even apologetic about their achievements.  This is reinforced throughout working life, when they are undermined or talked over in a meeting or told ‘do your time’.  The lack of senior women role models only compounds the problem.  More women need to feel comfortable about speaking openly and proudly about their ambitions because this will empower more women and girls to lean in and embrace their dreams.

I am proud to be a woman in the law because I have picked up the baton passed on by the extraordinary women who came before me and every day I am being lifted up by their achievements.  It is an honour to be the first lawyer in my family, to have a job where I can influence government decision making and to be able to inspire the women and girls who come after me to achieve their dreams, regardless of their background.