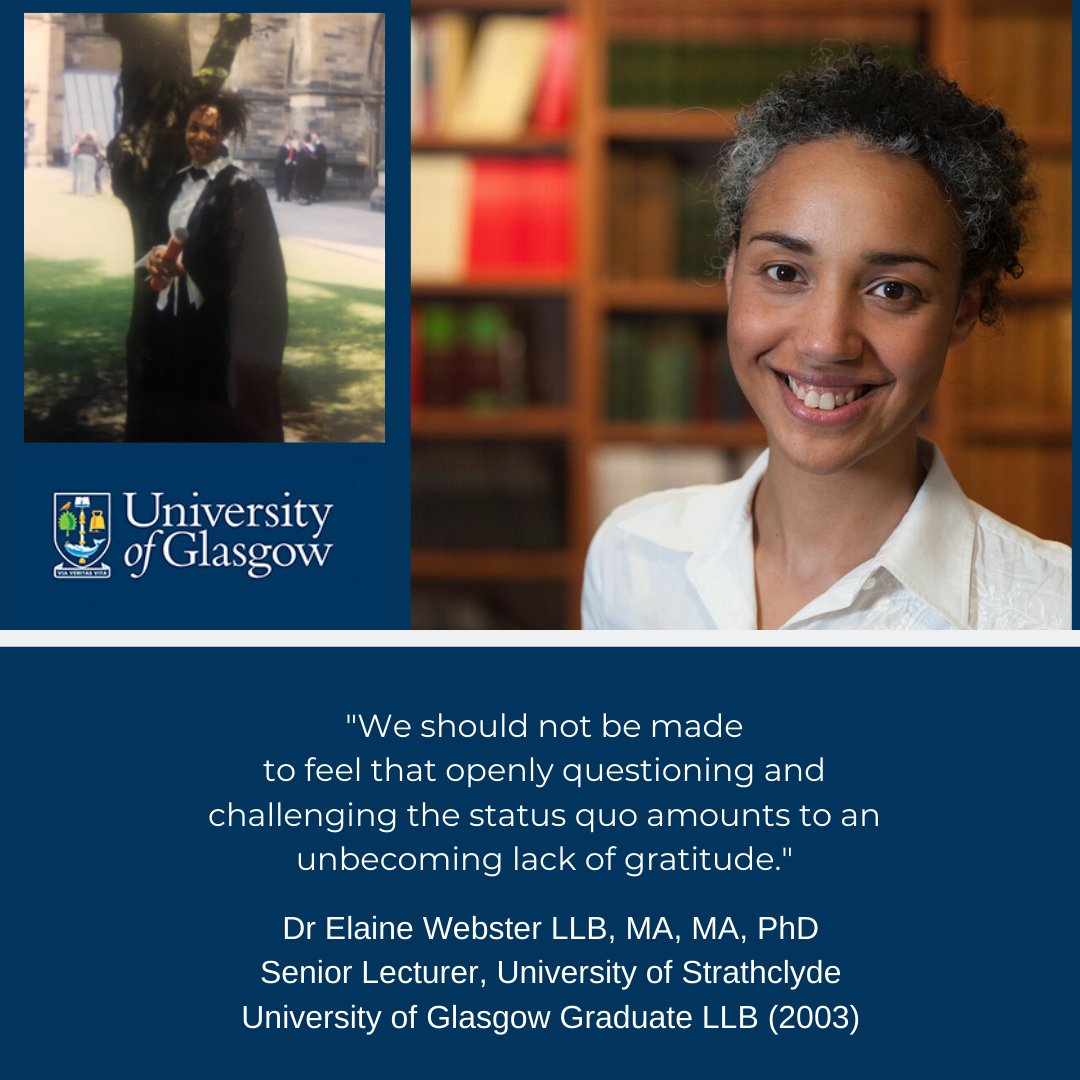 I have some vivid memories of my time at Glasgow University. The first thing that I remember was attending a summer school before starting university, in which we studied philosophy, sociology and law. I made a great friend there (now a sociologist!) and I must have enjoyed learning about law (although all I can actually remember learning about is Descartes). If it had not been for that summer school I might well have ended up in Edinburgh studying Artificial Intelligence and Computer Science… I never had a clear plan about what I wanted to do when I left school. I enjoyed almost everything, from maths to languages to drama. I thought the best course of action would be to keep my options open and computer science or law seemed suitable. That summer school was a fortuitous turning point. I followed my instincts and arrived at the School of Law in 1999.

I don’t think it crossed my mind that I would be moving into quite a different social circle. The more affluent backgrounds of some of the students was eye-opening, but, although my background had been very different, it always seemed obvious to everyone around me that I would go on to higher education. My mother says that a primary school teacher, Mrs Paton, told her when I was about 7 years old that I would have to go to university. This became the expectation and I was the first in my family to do so. (Recently, I actually contacted Mrs Paton’s son – a lawyer! – to tell him how influential a teacher she had been, and that I had also, somehow, ended up studying law). I was lucky growing up to have been encouraged in many different ways by many people – by family, school friends, primary and secondary school teachers, but also by many others, from Sunday School leaders to dance teachers; if I named them all it would form a very long list. From this encouragement I must have developed a strong sense of self-confidence. Once I arrived at University, I felt absolutely entitled to be there.

Neither did it cross my mind at the time that there would be little ethnic diversity amongst my peers (or the staff), having been to the very diverse Shawlands Academy in the south side of Glasgow. Thinking back, I can only remember three other students of mixed heritage at the School of Law, all of whom are still three of my closest friends. This didn’t faze me either; in fact, I never thought twice about it. I had a tendency to avoid overthinking things (which I’ve come to appreciate as a strategy generally).

I have some other vivid memories about studying Law at Glasgow. I remember being studious and serious, rarely missing a lecture, always in the front row. It was eventful, working part-time, being involved in student politics, and having a close group of friends within and outside of the School. I remember telling Professor Rob Dunbar, my Advisor of Studies, that I did not want to practice law and asked if I could study an optional class in astronomy rather than tax; we settled on Forensic Science. I remember sitting, uncomfortably in the pews of the 17th century Humanity Lecture Theatre, being inspired by a young EU law lecturer (the wonderful Maria Fletcher). I remember receiving the letter to say where I would be going on my life-changing Erasmus year to France and having to look up Liège on a map (which to my surprise was not in France at all, but Belgium – another stroke of good fortune, it turned out). I remember the pressure of exams and crowding around the results posters under the arches. I remember my honours class in Legal Theory with Professor Scott Veitch. We read an article by Aboriginal scholar Professor Irene Watson, about land law in colonial Australia; I later told Professor Veitch that this was my lightbulb moment, when the power and contingency of law all made sense to me.

After graduating, I went to Brussels and did a bi-lingual French and English Master of Arts in International Politics. It was there that I discovered international human rights law. I went to Italy and did a Master of Arts in Human Rights and Democratisation. I then did a PhD at the University of Edinburgh, exploring interpretation of the right not to be subjected to ‘degrading treatment’ in European human rights law. That topic remains at the heart of my research interests today as an academic at Strathclyde Law School.

I feel lucky to have found my path to legal academia. Aside from the amazing professional experiences I’ve had, one of the best things has been the intelligent and dedicated women I’ve met along the way, from those who have become lifelong friends to fantastic female colleagues and supporters in academia. Hearing more of those experiences through the 100 Voices project has been uplifting.

I do sometimes wonder what the future will look like for the female students that I teach. The world of legal practice – from my outsider perspective – seems challenging, including for working parents. The author Christine Armstrong, in her book The Mother of all Jobs, writes that she has seen high stress levels in particular amongst those working in large companies where work success is based on long billable hours and unsociable networking hours. In academia, we need to amplify the conversation about workload. The current situation is unsustainable. A structural solution is needed, but in the meantime perhaps we can do better in addressing subtle forms of working practice that unintentionally place extra pressures on female colleagues, who are often already overburdened. These are stubborn challenges, which remind us that, whichever sector we are in, we’re all part of the same world of women in work.

For the sake of my own daughters’ future in that world of work I’m always open about the reality of accommodating a demanding job and family life, and am thankful to the women who have been honest about it before me. We should not be made to feel that openly questioning and challenging the status quo amounts to an unbecoming lack of gratitude. The next 100 years will have to see some changes, and I say that whilst appreciating the incredible opportunities that I have had, and the incredible privilege of being one amongst a remarkable community of women in law.