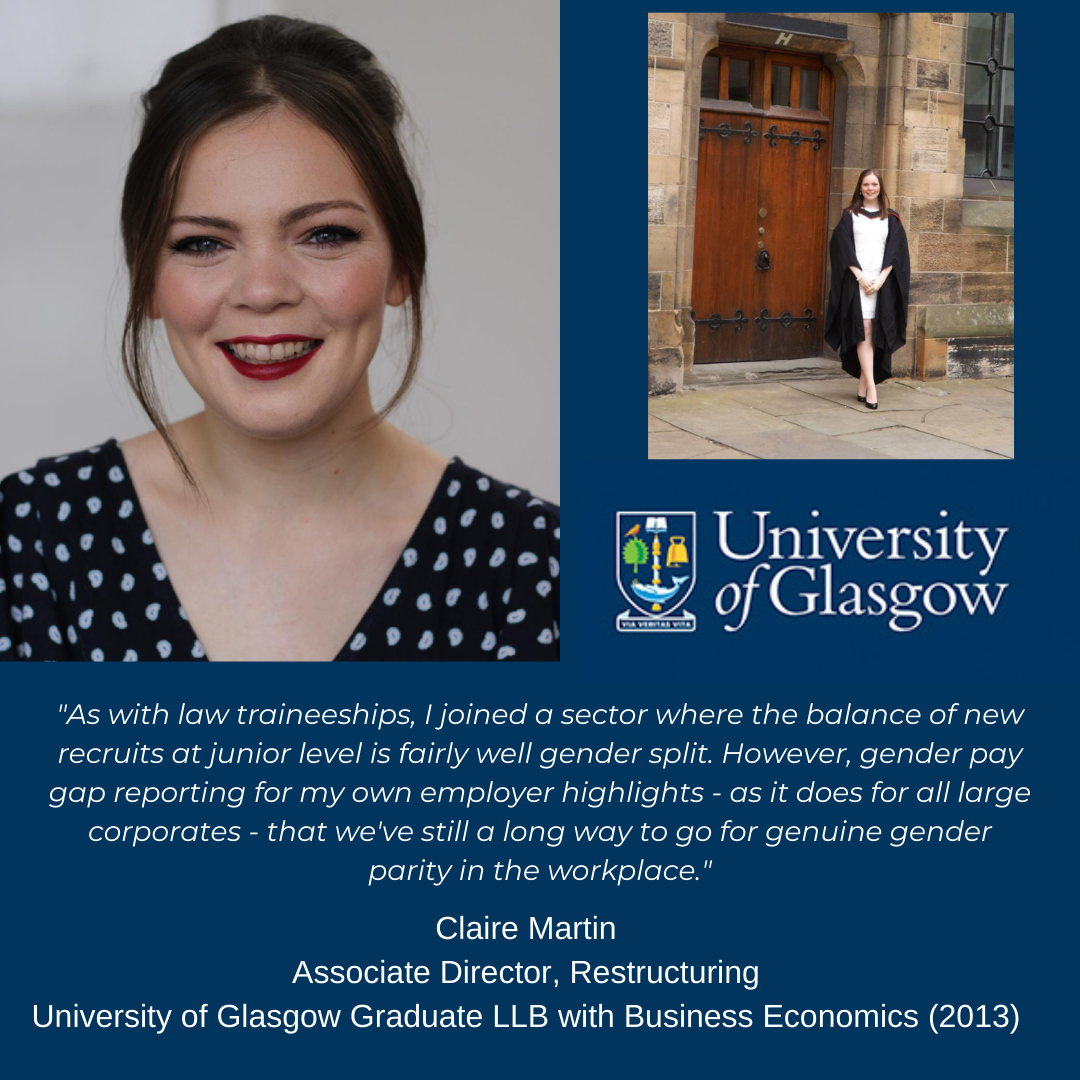 At school, I landed on pursuing a career in politics. Politics is something I've been interested in since being a teenager, for the ability to effect change and fight inequalities. But in fifth year of secondary after attending a Q&A session with a former government minister I had a rethink. On stating that my plan was to go to University, get a job at Parliament and then ultimately seek a role as an MSP I was met with a blunt response - don't be a career politician, go and develop your understanding of a life outside of politics first. As an encounter it has stuck with me not only for the (helpful) frankness of the exchange, but as evidence of the impact one conversation or piece of advice can have on someone else’s path. So by the time I started University I was very open minded about what I wanted to do, but I knew a law degree from the University of Glasgow would be well recognised and keep my options open.

Studying law at the University of Glasgow gave me much more than a degree. I have an incredibly strong friendship group which formed organically over the first few weeks of the course (friendships cemented over a GULS cheese & wine night, it turns out, give you friends for life). In the group there's two lawyers, a primary teacher, a civil servant, a marketing manager and me - so evidence that a law degree opens lots of career doors beyond what people may expect!

I didn't take up the opportunity of a year abroad, as it would have meant I couldn't do the necessary courses to get my joint degree in Business Economics. My friends who have studied abroad all loved the experience but I was incredibly fortunate to get to go on summer courses through the law school on Human Rights and Competition Law that gave me the best of both: the specific degree that I wanted, whilst getting to experience a snippet of the study abroad lifestyle. And whilst beers, bikes and beaches featured heavily, so did the incredible experience of being in a learning environment with peers as passionate and interested in the subject matter as you, the challenge of different perspectives from around Europe (both legally and personally) and some world-class mooting talent to hone my skills against! I am distraught at the thought that in a post-Brexit setting such opportunities to meet, debate and learn from other students across Europe will be taken away from current and prospective law students through no fault of their own, or the law school.

In 2012 Nicola Sturgeon was invited by Professor Rosa Greaves, then head of the law school, to give a lecture in her alma matter on Scotland's constitution, and at the end there was a chance for questions. Being in the midst of essay writing at the time, and in a room full of law students and lawyers, I seized a chance to make an (admittedly for anyone outside of law, terrible) in-house jokey comment about the fact that the then Deputy First Minister cited a textbook as one of her sources in favour of independence - when one of the first things you are taught is to make sure your legal basis is legislation or a case. In the audience was a lecturer who at the time was also acting as an advisor to a member of the House of Lords - and the story ended up being retold there. But when the readout arrived, the story told of a joke shared between Ms Sturgeon and a male student at the law school. And so, in a strange way, I may not have gone with the career in politics, but I did get my moment on the Hansard record, albeit unnamed, and as a different gender (perhaps an example of gender assumptions being misapplied - or perhaps a genuine mistake!).

The University of Glasgow has had some fantastic, inspiring rectors in its history, and one of my all-time favourite quotes comes from Jimmy Reid's 1972 speech on his inauguration as rector in Bute Hall (a place which conjures up both nervous memories of exams and joyous ones of sharing my graduation with good friends).  In his address he spoke of the rat race, encouraging working environments and relationships focused only on the personal success of the individual at the expense of community, quality of life and opportunities for all. "A rat race is for rats. We're not rats. We're human beings. Reject the insidious pressures in society that would blunt your critical faculties to all that is happening around you…"

I remind myself of Jimmy Reid's speech weekly - and talk about it a lot (including at a few work events!). Working in a corporate environment, I find it is a good challenge to step back and ask if you can work in such a job and sector with ambitions to progress and not fall in to the trap of being a "rat"? In my view, absolutely - but you need to ensure you're working for a purpose-led organisation and that you are constantly challenging yourself on the decision to be there: is the work you are doing genuinely adding value to a segment of society? Is it supportive of its employees in promoting mental wellbeing, genuine flexi working and development opportunities? Does it call out poor behaviour in both its people and clients, and is it somewhere that encourages people to bring their whole selves to work?

As with law traineeships, I joined a sector where the balance of new recruits at junior level is fairly well gender split. However, gender pay gap reporting for my own employer highlights - as it does for all large corporates - that we've still a long way to go for genuine gender parity in the workplace. In fact, the figures for my employer highlight a gender pay gap average of 23% - which rises to 36% when the partners (more senior positions) are accounted for - and jumps to 53% when the analysis is looked at just on bonuses. Future, more "progressive" targets have been set - but it is likely we'll look back and admit these were far from ambitious enough.

I will always appreciate the privilege of being able to study law at such an excellent university without the burden or barrier of university tuition fees. I hope that this holds true for the next generation of activists and change-makers, both in law and in a variety of other areas, who can develop in the School of Law - if given the opportunity.