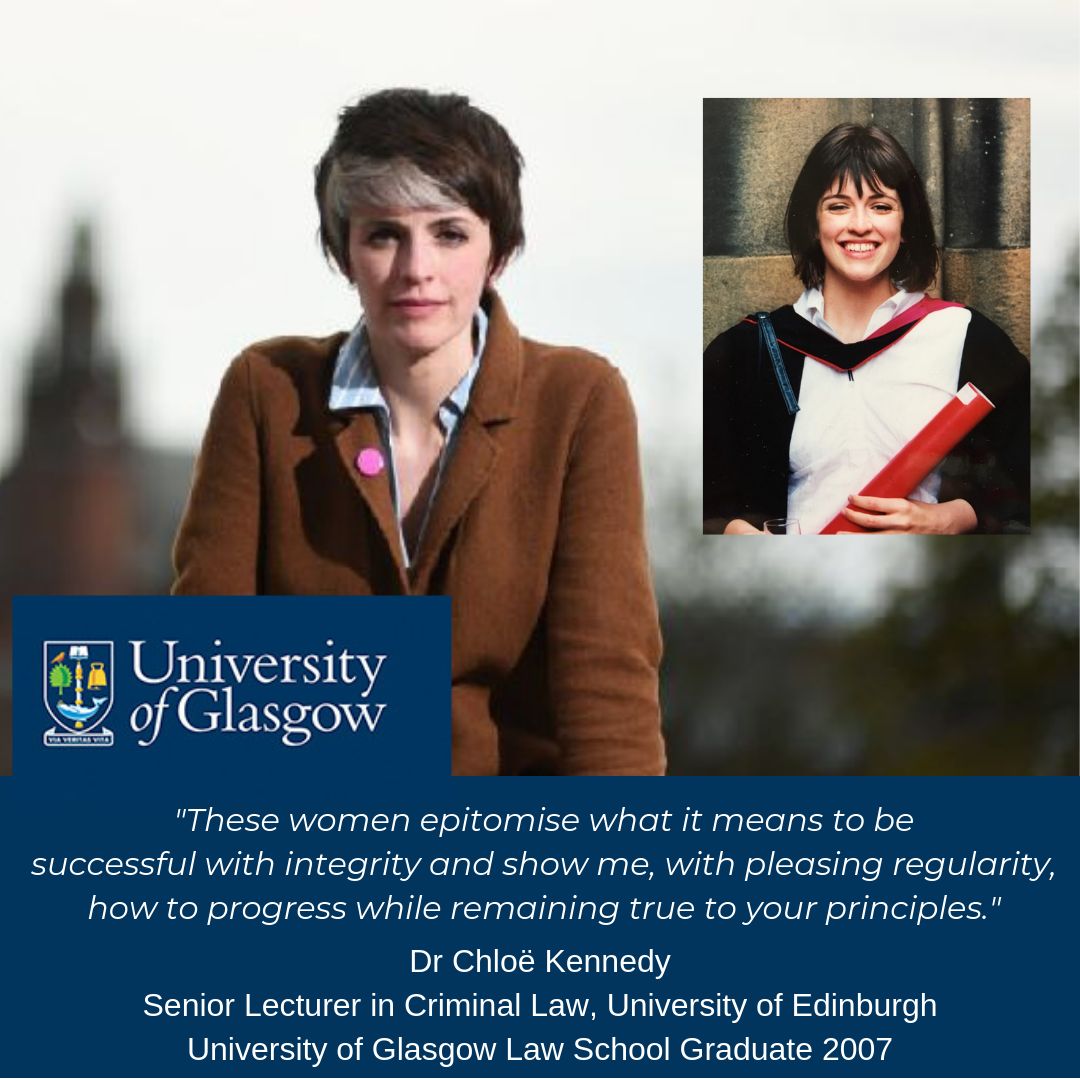 My decision to start a law degree at the University of Glasgow was not based on a long-held, or even very strong, desire to become a lawyer. To be honest, I was never particularly sure what I wanted to do with my life. Before starting university, I spent a short time interning at a national newspaper and then a year working in the laboratory of a whisky distillery as part of the ‘Year in Industry’. This scheme offered gap year placements to young people who wanted to pursue a career in STEM and, at the time, I thought I might want to become a chemical engineer. When I eventually opted to study law the decision was loosely based on the fact that I enjoyed working with words and was interested in trying to redress injustice.

My years at Glasgow Law School were mixed. I made important friendships with students in my cohort and, after a shaky start, hit my stride academically some time in second year. A few of the subjects I studied did not interest me, though, and I remember the sense of freedom I felt when I was allowed to take some non-law courses in order to fill my timetable before a semester abroad in third year. Glasgow’s exchange programme was a major reason I’d opted to accept my offer there, rather than go somewhere else, and I was very excited when my application to the University of Sydney was successful. At Sydney, I took a class with Prof Reg Graycar called ‘Gender and Law’ (I think – it could have been ‘Law and Gender’), which made a strong impression on me. We read and talked about the various ways law fails to reflect the experience of women, and impacts negatively on their lives, and it was the first course I took that combined critical and socio-legal perspectives on law.

After graduating in 2007, I was again unsure what to do. I hadn’t applied for any traineeships, since I was still not convinced I wanted to practise law, and I was unsuccessful in securing a job at the Equality and Human Rights Commission even though I managed to get an interview. In the end, I spent six months volunteering at a Citizens Advice Bureau in Glasgow and temping in a big firm of solicitors. Following this, I got a job as a Fiscal Officer in the Crown Office and Procurator Fiscal Service (COPFS) but then moved on to the Scottish Law Commission in summer 2008. My role at the SLC was ‘legal assistant’, which meant engaging in research and generally supporting other members of my team. I was pleased to be assigned to a project on ‘double jeopardy’ – trying a person for a crime of which they have previously been acquitted – because I’d enjoyed studying criminal law at university.

Since the job at the SLC only lasted a year, I applied for, and was offered, both a traineeship at COPFS and a funded place on an LLM programme at the University of Edinburgh. I decided to defer the traineeship and undertake the masters. When I eventually secured an offer and funding to do a PhD at Edinburgh I told COPFS I wouldn’t be joining them and began working on my thesis, which looked at the relationship between religion, philosophy and Scots criminal law. Transitioning into the role of ‘colleague’ when I was appointed lecturer in criminal law in 2013 was challenging at times but made easier by the fact that doctoral students are, in many ways, regarded as faculty. I was also very aware of the precarious position of many early career researchers and this made any minor difficulties associated with staying at Edinburgh even less significant.

During my time in academia, I have been affected by a number of the general issues that afflict academics, including poor mental health, a culture of overwork, and ever-decreasing time for research. I’ve also been affected by some of the issues that are inherently gendered, such as sexual harassment, disproportionately onerous student demands, and imposter phenomenon (I purposefully avoid the term ‘imposter syndrome’). What has kept me going is the satisfaction and joy I get from teaching and interacting with students and from asking, and trying to answer, exciting, interesting and important research questions. In all of these tasks I try to manifest the commitment to fairness and justice that drew me to study law in the first place and to deploy the critical perspectives that kept me engaged when I doubted my decision. It has been especially rewarding to serve as Senior Tutor in my School, notwithstanding the gendered expectations around providing students with pastoral care. Coming to university is a major upheaval for most students, and the intersecting disadvantages and vulnerabilities many of them experience are still not addressed adequately (NB at Edinburgh Law School we have a fantastic widening participation programme run by Lindsay Jack). Being able to introduce measures that aim to reduce the impact of some of these issues has been an honour.

I was recently promoted to senior lecturer – the culmination of a lot of work and a lot of luck. I am aware that very few people have the luxury of swithering over which career path to take, and not many end up working every day with curious and enthusiastic people. I have also enjoyed the constant support – of family, friends and my partner – that is required to survive in academia. To top it off, I have been exposed to excellent role models, most notably the three women with whom I co-ordinate the Scottish Feminist Judgments Project – Sharon Cowan, Jill Kennedy-McNeill, and Vanessa Munro. These women epitomise what it means to be successful with integrity and show me, with pleasing regularity, how to progress while remaining true to your principles.