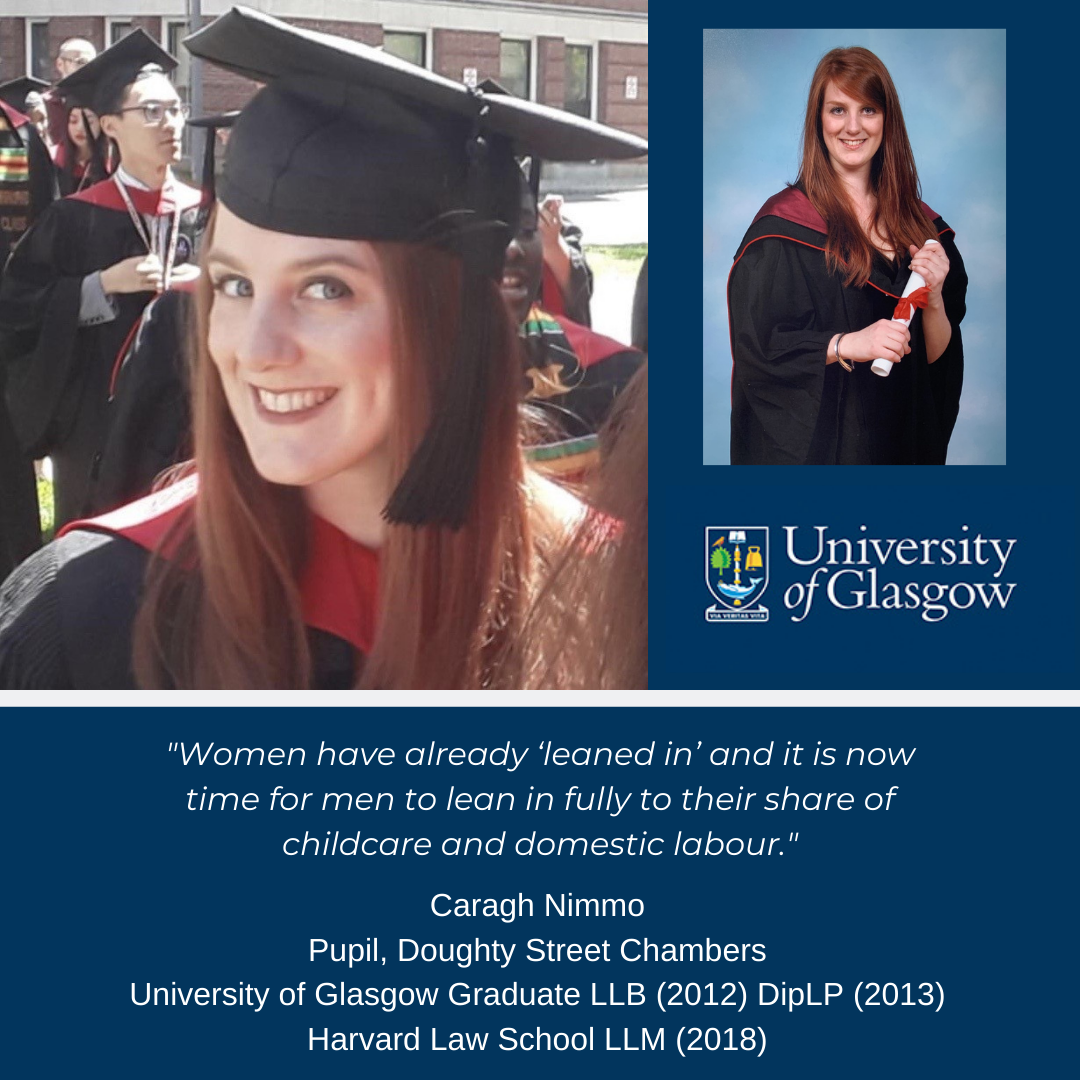 When I think back on my time at the University of Glasgow Law School, I remember two things most vividly. Firstly, the friends with whom many an evening was spent in West End haunts debating the merits of one public law judgment or other, or arguing over the political issues of the day. Perhaps I should have known then that a career at the Bar would be a good fit for me!

Secondly, I recall fondly my final year LLB studies where I was fortunate enough to participate in Professor Jim Murdoch’s European Human Rights Project (which entailed spending a year preparing a mock human rights case which concluded with making of oral submissions at the European Court of Human Rights) and to take Professor Adam Tomkins’ course in Constitutional Law. I have long had an interest in gender equality and how the law might be used as a tool to promote the rights of women. My studies at Glasgow served to highlight how the lives we live, and in particular the lives of women, may be shaped by the constitutional and legal structures which govern us. At the same time, the encouragement of Professor Tomkins and Professor Murdoch gave me the confidence to imagine that I might be able to carve out a successful career in these areas of the law.

During my time at the Law School I also worked for a local MSP, helping out in the office with constituency casework, and interned with Capability Scotland, where I analysed the impact of welfare reforms on disabled people in Scotland. I saw how the system could seem very unfair applied to the lives of individuals, and how much beyond reproach it could often seem. These experiences, alongside my legal studies, reinforced my desire to pursue a career which would enable me to play a part both in developing our laws for the better, and in challenging individual injustices.

I graduated with an LLB from the University of Glasgow in 2012, and studied the Diploma the following year. I decided to qualify as a solicitor before trying my luck at the Bar, and completed my traineeship at a commercial firm in Edinburgh. During those years I very much missed the meaning and purpose that I had found in public law and human rights law, and as my traineeship was nearing its end I started to look for opportunities that would allow me to engage in these issues again.

I was extremely fortunate to secure a position as a judicial assistant at the Supreme Court to Lord Hodge and Lord Wilson immediately after qualifying as a solicitor. During the course of that year I was lucky to work on high profile and constitutionally novel appeals, including the first Miller case concerning the triggering of Article 50 and the Scotch Whisky appeal about minimum pricing of alcohol in Scotland. It was really quite something to spend my working days discussing cutting edge public law and human rights issues with my Justices, both of whom were exceptionally generous with their time. Observing the cut and thrust of the oral advocacy at the Court (and trying my utmost best to hone my own advocacy skills in discussions with my Justices about the appeals before the Court) confirmed my desire to pursue a career at the Bar. I decided to apply for pupillage at the London Bar where I would have more scope to specialise in my particular areas of legal interest.

However, I still felt like I still needed to do more to make my pupillage application competitive. It seemed to me, whether rightly or wrongly, that often a First Class degree from Oxbridge was a pre-requisite for making a successful pupillage application. And as a girl who had grown up in Glasgow, I did still often feel that I didn’t quite fit the mould of what a barrister was expected to be. I became more conscious of my accent and the puzzled looks that I would sometimes receive when I pronounced a word with a little more of a Glaswegian lilt than usual.

So I applied to study an LLM at Harvard University. I couldn’t quite believe it when I was accepted onto the LLM programme and offered a full scholarship by the Kennedy Memorial Trust to support my studies in the US. During my LLM I took full advantage of the opportunities on offer at Harvard to learn about the differences between constitutional law in the US and the UK, and the extent to which our respective legal structures protect our human rights. I took classes with Justice Kagan and (the soon to be) Justice Kavanaugh, where the Justices led the class in its analysis of the jurisprudence of the US Supreme Court. I also learned about the greater extent to which strategic litigation is used as a political tool in the US and about the ways in which Ruth Bader Ginsburg had used litigation to secure advances in sex equality under the US Constitution. It was apparent that litigation is often used in the US as a means of advancing civil rights, when the years between elections might seem to offer little in the way of accountability and the law makers do not reflect the diversity of the society which they purport to represent.

In the past year, alongside studying for my Bar exams, I have taken an interesting detour into life as a lawyer in the UK Government Department for International Trade where I have been involved in delivering the UK’s independent representation at the World Trade Organization and supporting the passage of legislation. It has given me a different perspective on how the law is made, and one which I hope will be useful in the coming years.

Throughout my career so far, it has been interesting to note that many of my mentors in the law and those who have supported my career progression have been men. While it is undoubtedly the case that women in the law need role models who reflect themselves, I do think that the contribution which men can make to supporting women in the law is also critical. It remains the case that no matter what the law says, equal opportunity will only be truly possible when women are not carving out careers in a world which assumes that women will compete equally with men in the professional sphere, and at the same time expects women alone to put in a ‘second shift’ at home. Women have already ‘leaned in’ and it is now time for men to lean in fully to their share of childcare and domestic labour.

I will shortly commence pupillage with Doughty Street Chambers in Autumn 2020, a set of chambers committed to the promotion of human rights and access to justice. I hope that a career at the Bar will give me the chance to realise the ambition which my time at the University of Glasgow was significant in forming; the opportunity to use the law to create a fairer and more equal world, particularly for women.