Prof. Asit K. Biswas is universally acknowledged as one of the world’s leading authorities on water, food, environment and development-related issues.

He has a very distinguished career as:

He has worked and lived in all continents except Australia. He was a member of the World Commission on Water, and co-founder of International Water Resources Association and World Water Council.

Among his numerous awards are:

Because of his manifold research contributions, he has received seven Honorary Doctorates of Technology or Engineering from leading global universities, including from both University of Glasgow and University of  Strathclyde.

He was elected an Academician over 20 years ago. He currently has an h-index of 46. Google Scholar lists 950 of his publications and over 10,400 citations of his work. He has a Research Gate score of 42.1, which puts him into the top 2.5% of all scientists from all disciplines from the entire world.

He is the author or editor of 89 books. His work has been translated into 42 languages.

Prof. Biswas is the founder of the International Journal of Water Resources Development and was its Editor-in-Chief for its first 29 years. 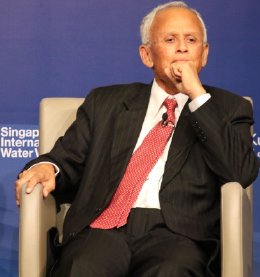