Professor Catherine Lido holds a Chair in Psychology and Adult Learning, within the School of Education at the University of Glasgow.

She is Associate Director at Urban Big Data Centre (UBDC) leading novel research in Educational Disadvantage and Place, which includes expertise in capturing lifewide learning with UNESCO's Learnings Cities metrics. She is a Co-I on UBDC Phase 2 and their data service extension grant, where she helped deliver, and promotes the use of, the integrated Multi-media City Data project open data source (iMCD data accessible at:www.ubdc.ac.uk).

Catherine is also Deputy Director of the PASCAL Observatory for Europe.  She is the former Programme Leader for the MSc Psychological Studies, and teaches mainly face to face and online topics, including Psychology of Adult Learning and Cognitive Psychology at the Masters' level.

Catherine has published widely in the area of Learning Cities and Lifewide Learning capture (see publications below). She has also had 8 successful funding bids in the last four years in the area of novel methodolgies to address education inequalities, including Co-I on the EPSRC-funded VisNET project, and GCRF on Gendered Journeys. Completed projects include the British Council Impact Study and the Eat Well Age Well partnership project on food insecurity in older adults with the charity Food Train.

Catherine was previously a Research Fellow, senior lecturer and former BSc Programme leader for the University of West London (UWL) (2004-2014). Her teaching and research interests are mainly within the social psychology of education and particularly in using novel methods to capture inequalities in all forms of learning. Catherine also acts as a visiting lecturer for the University of North Carolina Wilmington. Her PhD is from the University of Sussex (2004) in the area of social psychology, and concerned gender stereotypes in job interviews.

At UWL Catherine led a (2014) impact case study on Widening Participation in Higher Education, having collaborated on a number of funded research projects with the ESRC and the Higher Education Academy concerning supporting under-represented student groups. She has published widely in the field of inclusion in higher education, including a recently authored book chapter in Hinton-Smith’s (2013) ‘Widening Participation in Higher Education: Casting the net wide?’ . She is passionate about inclusion, prejudice-reduction and widening participation into higher education, and making adult learning more inclusive in formal and less formal settings.

Catherine delivers keynotes around the world, such as to the RSE-Ministry of Science and Technology on Big Data in Taiwan, to UNESCO-UIL expert panel on Learning Cities in Singapore and for the UNESCO Learning Cities anual conferences (Medellin and Mexico City). Catherine remains an active member of the British Psychological Society, sitting on the board of the Political Section), as well as the European Association of Social Psychologists- delivering a symposia on gendered inequalities.

Catherine maintains a regular media presence on BBC radio, TV and appeared on the June cover of The Psychologist Magazine on 'Big Data in the Big City' https://thepsychologist.bps.org.uk/volume-32/june-2019/big-data-big-city.

Professor Lido's research interests are mainly within the social psychology of education and particularly in using novel methods to capture inequalities in all forms of learning.

She is passionate about inclusion, prejudice-reduction and widening participation into higher education, and making adult learning more inclusive in formal and less formal settings.

Gendered Journeys: the trajectories of STEM students and graduates through Higher education and into employment, in multiple global south contexts.

Catherine is passionate about creating a supportive and inclusive community for PhD researchers and is Co-lead of the School's PhD Community Building Team.

In 2010 Catherine was the recipient of an Institute for Teaching and Learning Grant (University of the West London) as a Technology Enhanced Learning Champion.

2015: Centre for Research and Development in Adult and Lifelong Learning (CR&DALL)/ Urban Big Data Centre joint conference organisation: Wellbeing and learning for a better life: Reflecting across cultures and contexts.

2010: Recipient of the Institute for Teaching and Learning Grant (UWL) as a Technology Enhanced Learning Champion.

2004-2006: Developed and delivered Staff Training and Associate modules (open to the general public) in SPSS, Qualitative Methods and ‘Think Psychology’.

March 2017: Universities Association of Lifelong Learning Annual Conference - Inclusion in Glasgow’s Learning City: An investigation of older adult engagement in all forms of learning across the urban context (York, UK).

March 2009: Centre for Applied Positive Psychology - How can we best support different students in their studies? (Warwick, UK).

Catherine is a fully qualified Pilates instructor and intends to obtain further certification to work with special populations - including pregnant women, older adults and those recovering from serious injuries. 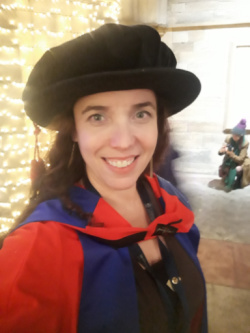