Research in the Chemical Photonics group 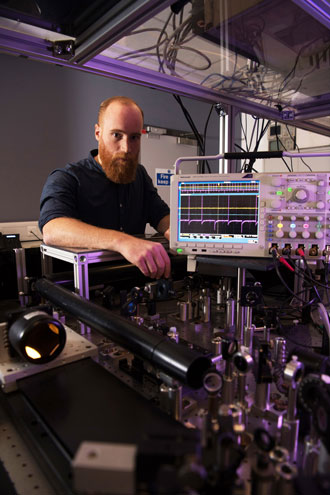 Research in the Chemical Photonics group addresses the physical aspects of chemistry and the chemical aspects of physics. The group is well funded with about £3.6M in current research grants from EPSRC, a €2.5M ERC Advanced grant, and funding from MRC, Leverhulme, and STFC.

The Chemical Photonics group is particularly strong in spectroscopy ranging from plasmonics to EPR and from ultrafast to the ultraslow. These techniques are used to study a range of exciting chemical physics problems such as biophysics, soft matter, and the interaction of plasmonics with chiral molecules.

Chemical Photonics research is fundamental while addressing global challenges. Technologies are being developed to aid future manufacturing, for example, through research on continuous manufacturing and crystallisation, the development of (chiroptical) sensors, and laser techniques for manufacturing and manipulation. Energy technologies involve, for example, ionic liquids as electrolytes for fuel cells and batteries and synthetic photosynthetic constructs. The work on sensors has additional applications to healthcare technologies (online detection) and addressing global uncertainties through spectroscopic detection of chemicals.

The Chemical Photonics group has extensive international research contacts in the US, Japan, and throughout Europe. We are actively organising international research conferences and our work has led to a string of publications in some of the top journals in chemistry and general science such as Nature Chemistry, Nature Nano, JACS, Nano Letters, Nature Communications, etc.

Key external partnerships are with:

as well as facilities such as:

We have existing collaborations with the following at Glasgow University: