Building on the success of the first Workshop held at the University of Glasgow in April, Workshop 2 shifted its focus from the materials and supplies used for textile production, to equipment, tools and techniques. Three speakers in the morning were followed by a presentation, practical demonstration, and group discussion in the afternoon, resulting in the formation of key points which the group will highlight for further research and exploration. 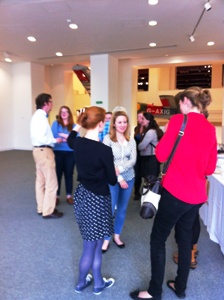 Equipment, tools and techniques for textile production is an extensive area of study, so the first presentation of the morning focused on introducing participants to some of the different types of machinery used. Professor John Hume gave an overview of processes, which was accompanied by images of machinery used for different elements of textile production. These included preparing fibres, creating and stabilising yarn, creating fabric, pattern, colour, texture, strength and durability, finishing, and packing for shipment. The presentation took participants through all processes, from treating the raw materials to packing them for transport, resulting in a joint awareness of the amazing array of types involved for both industrial and domestic textiles. Each different aspect could have warranted extensive discussion which was not possible in the timeframe, but is certainly something to flag up for the future.  Professor Hume’s pictorial and descriptive overview introduced the concept that idle textile machinery quickly becomes meaningless, something which needs to be considered by all heritage sites with relevant machinery.

This concept formed the focus of the second presentation, by Lorna Davidson and Janice Glover from New Lanark. The title, ‘Use it or lose it! Use of restored 19th and 20th century textile equipment at New Lanark’ concisely highlights the potential problems of caring for historic textile machinery. New Lanark is not a museum, but a working industrial community which uses its historic machinery to aid sustainability. Some of the existing machinery dates from the 1890s, and was removed from Selkirk and installed in Mill No 3 during restoration in the 1980s. In 1989 a small production unit for wool was set up. This has greatly expanded and they now spin their own Accredited wool and produce a range of wool products. Selling these is incredibly important: if there is no demand, then the wool will not be spun, and the machines will not operate. This was a strong message which highlighted the sustainability issues surrounding running historic machinery – a great deal of thought and effort has to be put in if something is to be viable. 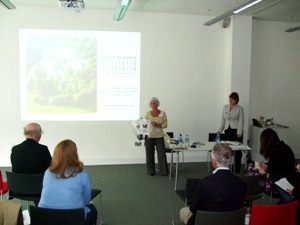 There are also issues regarding maintenance, with replacement parts difficult to source. Passing on the traditional skills of machinery operation is a priority, and New Lanark is working with the textile department at Heriot Watt to develop modern apprenticeships and work experience opportunities: something which should be held as an exemplar for others dealing with historic machinery of all kinds.

Linda Ross, Curator of the Scottish Maritime Museum, offered an insight into the process of making rope, focusing on the ropewalk machinery that the Scottish Maritime Museum exhibits in its Linthouse Building in Irvine. The Machinery dates from the mid-19th century and was used in the Port Glasgow Works of the Gourock Ropework Company until the 1970s. Having been removed from its original setting, the machinery is displayed out of context which can make conveying an understanding of its role difficult, something which many museums with static machinery displays experience. One way the Museum approaches this is by showing historic footage of the machinery making the ropes for Mayflower II. This footage was shown to participants, showing how the ropewalk machinery spun the yarn into rope. As the previous speakers highlighted, machinery which is not in motion quickly loses its meaning – archive footage injects much-needed dynamism into static objects. The use of models is another way of conveying machinery in action, and is something which the Museum hopes to introduce.
The focus of the afternoon shifted to the practical side of textile production. Dan Coughlan from Paisley Museum introduced his session by discussing some of the research he has done into the technology of making Paisley shawls. Much attention is routinely put on the patterns, but Dan’s research takes this further by looking at the structures of shawl fabric production – ‘reverse engineering’ the fabric to get a better understanding of how it was made. Dan reinforced the fact that design and technology is inextricably linked, with design dictated by the possibilities of technology in many ways. This shift was effected by the change from hand to powered weaving, as machinery could not reproduce the dexterity of the human hand: an interesting area for study given the complexity of the Paisley shawl designs.

Dan’s work is an excellent example of active in-depth research in a museum setting, which is something that few curators get the opportunity to do. Dan’s practical skills also enabled him to enhance the displays at Paisley Museum, and he regularly operates the Museum’s handloom. This again reinforces the necessity to introduce movement and operation into the preservation of equipment.

Bearing this in mind, the following part of the afternoon involved Dan treating the group to a practical demonstration of National Museums Scotland’s loom. This was an excellent opportunity for the group to see historic machinery in operation and consolidate much of what had been learned during the presentations. Seeing the loom doing the job for which it was intended enabled participants to make immediate sense of its role, something which would not have been possible had it remained static – an important consideration for all textile machinery historians and custodians. 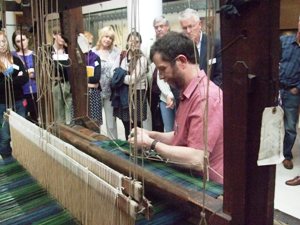 The presentations and practical sessions provided an excellent basis for the break-out group discussions which followed. This was an extremely worthwhile exercise as only a few topics could be covered by the presentations – the discussions allowed participant to explore the subject matter in greater depth, with the following questions as starting points – what knowledge is there of textile machinery in Scotland? Who were the main suppliers of machinery? How well are practices recorded? How should items be best displayed – as working items or static exhibits? What should we be collecting – how do we do this, especially where large items are concerned? How can we fill gaps? Which areas would be suitable for future study?

Mark Watson, Historic Scotland, produced a list of the 'Main Sources of Machinery in the Scottish textile Industry - c. 1950'

Some of the key points highlighted include:

• Establish which aspects of production should be collected – the compilation of an inventory will help identify gaps.
• Machinery can be difficult to source. Collecting memories from those who have operated 19th century machinery throughout in the 20th and 21st centuries, or those with specialist historic knowledge, is vital if we are to enhance our understanding.
• If we are to fill gaps then we need to establish where textile machinery was sold or re-sold to, linking with the diaspora of Scottish industry.
• There is the possibility to ‘commission to collect’ – for example, gaining an awareness of companies which are the last of their type and identifying potential acquisitions – ref the last shuttle maker which Dan Coughlan mentioned during his presentation.
• Obtaining detailed information at the point of collection is essential. Museums which haven’t done this in the past often face problems piecing together the history of objects. Making oral history recordings is one way of securing information.

• The people who operated machinery in the 19th century are no longer around to pass on their memories. We need to focus on collecting memories from those who have historical knowledge and practical experience of operating textile machinery.
• Preserving knowledge and working practices is essential. The example set by New Lanark is an excellent model for others to follow. Knockando Woolmill also has an apprentice programme running through Historic Scotland.
• Liaising with education organisations which offer textile and engineering courses will help transfer knowledge to new generations. Placements could be developed for practical experience and historic knowledge.
• Preserving knowledge and working practices is more difficult in museums with static textile machinery. In these instances, archives, photographs and footage come into their own.
• Few curators have specialist textile knowledge, and as we become further removed from the period there is the danger that this will increase. To assist with this we must ensure that the knowledge of existing curators and specialists is captured. One way of doing this is through initiatives like the Museum Association’s Monument Fellowship scheme, but knowledge capture is something that can be done less formally as part of an organisation’s succession planning.
• A simple yet important point: speak to other experts so everyone is aware of what’s going on in terms of research, collecting and display.
• Asking the public for information is another useful technique for knowledge capture.

• Archives, photos, and footage are required to bring static exhibits to life and provide context for all exhibits.
• The best way for people to properly understand something is for them to see it in operation. There is a pressing need to maintain a tangible cultural heritage.
• Some items may not be suitable for operation, so everything should be assessed on a case by case basis.
• Health and Safety concerns need to be kept in mind at all times.
• There is a lot of romanticism associated with the textile industry, which often obscures the reality. An immersive sensory experience is required to overcome this, like that at the Museum of Early Industrialisation (Museum für Frühindustrialisierung) in Wuppertal.
• Models are an effective way of making sense of a static exhibit.
• Digital technologies can bring exhibits to life and inject dynamism.

Developing a sustainable textile heritage centre, covering all aspects above, would help secure and share knowledge. This is obviously an extremely large project, but something that should be kept in mind at this stage.

The ReINVENT group is founded on linking different disciplines. Cross disciplinary interaction is a key part of future study, and the different industrial and academic links which have emerged as a result of the first two workshops will certainly inspire future study. We look forward to moving on to Workshop 3, which will focus on power for textile production. Thank you to everyone who helped make Workshop 2 such a succes, in particular our speakers John Hume, Lorna Davidson and Janice Glover, and Dan Coughlan.