What is equine piroplasmosis (EP)?

The disease is caused by intracellular parasites that are spread via certain tick species while they are feeding. Although the disease is substantially older in origin, it was first described scientifically in 1901 in samples from South African horses. The two parasite species responsible are Apicomplexans called Babesia caballi and Theileria equi. Sporozoites, the infective stage of the parasite in the tick saliva, enter the horses blood stream while the tick is feeding. The parasite invades red blood cells where it develops to the merozoite and begins replicating. Merozoites rupture from infected cells and go on to invade and replicate in further erythrocytes. This destruction of red blood cells causes  acutely infected horses to become very sick, developing fever, anaemia, dehydration and lethargy. In untreated or severe infections it is not uncommon for the horse to die from the condition. In contrast to B. caballi, T. equi has a pre-erythrocytic phase before the invasion of red blood cells. During this phase, sporozoites infect and divide within lymphocytes and monocytic white blood cells. This causes widespread lymphoid depletion, lymphocytosis and leukopoenia due to the destruction of white blood cells. Merozoites released from these destroyed cells then go on to infect and destroy erythrocytes. The more severe clinical presentation of T. equi has been attributed to this extra phase. 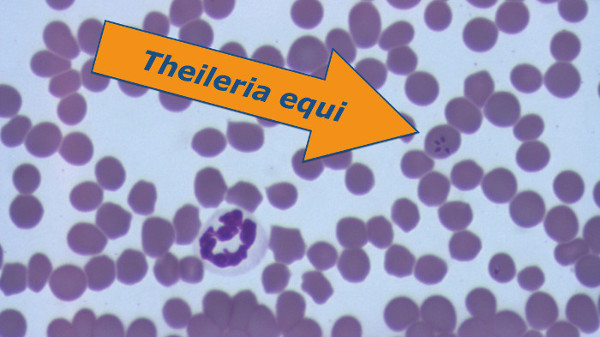 Horses with milder infections, or that have recovered from serious disease, can also be affected with chronic signs such as weight loss and reduced physical performance. Once infected, there is strong evidence that horses become carriers for life, despite any medical treatment that may have been given. These carrier animals are not only prone to flare-ups of disease but also act as a source of infection for other horses, primarily via the tick but also potentially through blood to blood contact such as blood transfusions or the use of contaminated needles. 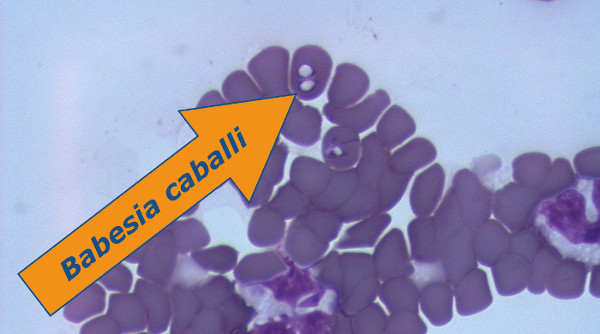 Babesia caballi merozoites present in a red blood cell. The parasite’s pear-shape, from which it derives its name (latin ‘pirum’), is clearly evident.

Ticks become infected by feeding on the parasitised blood cells of carrier animals. Both B. caballi and T. equi then undergo sexual reproduction within the tick. T. equi undergoes transtadial transmission, meaning it becomes infective to new horses when the tick moults into the next stage of its lifecycle. In contrast, B. caballi undergoes transovarian transmission. In this case the parasite infects the ovaries of the tick, infecting the eggs and the resulting offspring. As female ticks can lay several thousand eggs, this transmission route is very important in the spread of EP in a locality, as parasite numbers are amplified with a single infected female tick producing many infectious offspring.

If pregnant mares become infected they can pass this infection on to their unborn foals. This can cause either abortion or acute disease in newborns, again often fatal.

Is the disease widespread?

EP is a global problem, particularly in Africa, Asia, South America, the Middle East and Mediterranean countries. It is estimated that 90% of the world’s horse population lives in an EP endemic area. The disease is present in Eastern Europe and, closer to the UK, there have been recent cases reported in France, Holland and Spain. These are countries that transport horses to the UK and Ireland on a regular basis providing a potential avenue for EP entering the country. 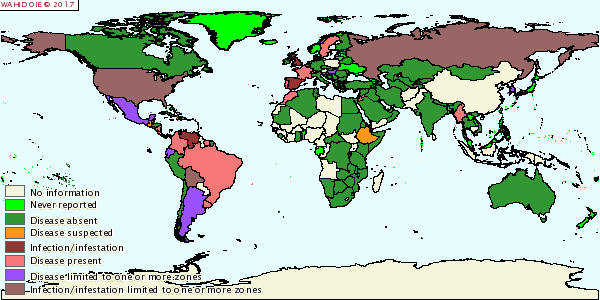 Global distribution of equine piroplasmosis for the period January – June 2015, as reported by World Animal Health Information Database from the World Organisation for Animal Health (OIE). The database can be accessed by clicking the map above.

What is the risk to the UK and Ireland?

The UK and Ireland are presently free from endemic disease, although the disease has been found in imported animals. The absence of endemic EP is largely due to a lack of tick species capable of transmitting the disease. However, due to changing climatic conditions, a number of tick species capable of EP transmission have been identified in the UK. These include the tick species Ixodes ricinus, Demacentor reticularis and Haemaphylis. There is no compulsory screening for the disease in imported horses and, although EP is notifiable in Ireland, there is no official obligation to report the condition in the UK. In addition, the Tripartite Agreement (EU Council Directive 2009/156/EC) was introduced in 2014, which allows less restrictive movement of horses between the member states of France, UK and Ireland. In light of these facts, there is currently an urgent need to understand the epidemiology of this disease and determine whether it can establish in the UK horse population.

Is the disease dangerous to people?

No, there has been no reported illness in humans cause by these particular parasite species. However, tick bites can carry other diseases and any bites found on yourself or other people should be checked over by your doctor.