Enhanced productivity in the egg industry

Research conducted in our Institute has helped the UK egg-laying industry, by driving substantial improvements in productivity and bird welfare. 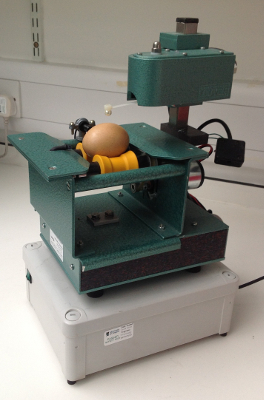 Cracked and damaged eggs account for 8–10% of total global egg production, resulting in substantial economic loss across this industry. Prof Maureen Bain in the Institute of Biodiversity, Animal Health & Comparative Medicine, and Deptury Director of the School of Veterinary Medicine validated an innovative new tool that uses acoustics (sound) to assess eggshell quality. Working with industry partners, and in collaboration with Dr Ian Dunn (Roslin Institute, UK), Prof Bain showed that the acoustic test can predict the probability of egg cracking during routine handling, and that this trait measured by the test could be passed on from parent hens to offspring. The acoustic test can therefore be used to select birds with improved eggshell quality for selective breeding.

This validation led directly to the tool being adopted by two of the largest international poultry-breeding companies, which have used it across their breeding programmes. Given the significant share of the UK egg-laying market these companies occupy, the increased number of undamaged saleable eggs produced by these hens saves approximately £10 million annually to UK egg producers alone. An additional advantage to these companies is that the enhanced eggshell quality also improves the hatchability of breeding stock eggs, which further increases the yield of laying hens, and thus eggs, to the market.

Prof Bain has continued her industry collaborations into new work, described in our industry engagement section.

Research into poultry welfare has also influenced UK government policy decisions on the welfare management of laying hens. Injurious bird-to-bird pecking can occur in a significant proportion of UK flocks, and outbreaks are unpredictable. Damaging pecking presents a major welfare and economic problem, affecting laying hens in both intensive (cage) and extensive (barn and free-range) systems. Commercial egg producers currently use beak trimming to minimise the damage caused by such outbreaks. In a project jointly funded by DEFRA and the British Egg Industry Council, Dr Dorothy McKeegan investigated the long-term welfare implications of using a new infrared technique for beak trimming. The research showed that this approach does not result in chronic pain or other adverse consequences for sensory function, and thus represents a significant refinement over earlier methods.

These findings influenced the UK policy debate and contributed to a decision to defer a ban on beak trimming that was due to be enacted in 2011. Coming at a time when the UK industry was not well placed to mitigate conditions that could lead to damaging pecking, the ban would have exposed 35 million laying hens to potential pecking injury or death, as well as costing the industry an estimated £4.82–£12.3 million annually. Research is ongoing at a number of UK institutions to determine optimal management strategies to mitigate the risk of injurious pecking, and thus reduce the need for beak trimming ahead of review of beak trimming policy in 2015, with a view to banning the practice in 2016.