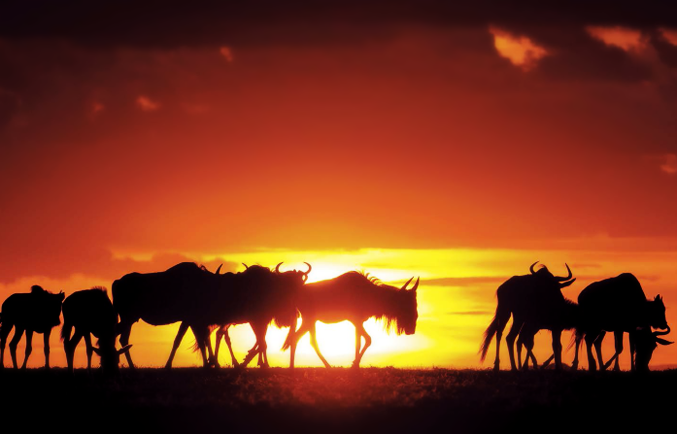 Researchers have developed techniques to recreate a personalised diary of an animal’s lifetime.

The team from the Institute were able to recreate nutritional timelines that illuminate the past experiences of Serengeti wildebeest by looking only at the animals’ tail hair. The work, published in Rapid Communications in Mass Spectrometry, shows how nitrogen stable isotopes can be used to reconstruct nutritional histories that revealed repeating periods of extreme starvation in the world’s most famous migration of terrestrial animals.

The technique is akin to looking at the rings of a tree and can be used in a similar manner to re-create the animal’s physiological history. Hair incorporates metabolites from the body as it grows and offers a continuous record of the chronic condition of the wildebeest. By collecting hair from a single observation of an animal, the researchers were able to forensically determine the animals’ past experiences. They also stress this technique has a wider potential and could be used to unravel the hidden secrets of other species as well.

“Formerly, we had very little knowledge about the seasonal demands that wildebeest face, but this novel technique enables us to learn much more about how wildebeest survive. By sampling hair from wildebeest carcasses, we are now able to establish a record of an animal’s body condition preceding its death and infer details about the causes of mortality with greater precision.”

The researchers found out that starvation patterns in the wildebeests are driven primarily by the demands associated with reproduction; and that the enrichment of nitrogen stable isotopes in the tail hair strongly correlates with periods when the animals use more energy than they can get from their food. The results of the study suggest there are very distinct phases during the great migration when animals pass through starvation bottlenecks and are more likely to die.

“This technique helps us understand how the animals use their environment. Interestingly, the wildebeest drop their calves in the most nutrient-rich locations of the Serengeti ecosystem and parallel their lactation with the wet season when the grasses are most productive. This suggests that the timing of the migration is synchronized with the most energetically demanding phases of the animal’s life cycle.” Rysava added: “To date, the migration could only be related to environmental factors such as rainfall and vegetation, and not to any internal, physiological conditions. The hair technique will give us much deeper understanding about the ecology of wildebeest, and ultimately helps us protect this iconic species.”

“These results are particularly sobering when we consider that climate change is causing major shifts in the rainfall patterns across sub-Sahara Africa. If the timing or location of the rainfall shifts, this great migration of 1.3 million wildebeest may no longer be able to synchronize their reproduction with these events in the future.”

The article, "Re-constructing nutritional history of Serengeti wildebeest from stable isotopes in tail hair: seasonal starvation patterns in an obligate grazer" is published in Rapid Communications in Mass Spectrometry.